To be completely honest with you, I only played some Hand Of Fate, and that was for a little while, a long long time ago… Seems like we had the same idea, doesn’t it?

Well, yes, the plan is for the devil to pop up and yell “SCOOORE!” whenever you do something ethically dubious, and the angel doing a similar spiel when you’re “good”, but whether that will in any way influence the outcome of the game is still up for debate among us. I am excited about multiple-choice stuff etc generally, but I really, really want to keep Gibbous as “classic” as possible, so we probably won’t go overboard in that regard, but yes, there will be at least a few multiple-solution puzzles. Gotta buy more paper for them dependency charts

In other news, we are very humbled to be featured on this very site! Thank you so much, Adventuregamers staff!

Hmm, perhaps the number of “good” and “bad” decisions could influence the game’s ending?

Maybe the main character’s personal demon is in cahoots with the death cultists/Great Old Ones?)

Thanks for bringing that up - it was the subject of this morning’s brainstorming session, and we are considering a few routes we could take… One that we’re liking is actually altering the character’s appearance in accordance with his choices (and his attitude/dialogue options, too). We’ll have to give it some thought, and it’s very possible that this will make it into the demo, too, but we have to be really careful not to over-promise.

As cool as implementing a choice system with actual consequence is, it would be a huge undertaking. Are you really sure you want to make that kind of commitment, Underhill? If you do it half-assedly or in any way under deliver on the promise of choice and consequence people will berate you, and it’s the sort of feature that compared to cost and man hours probably won’t bring along with itself a lot of extra Kickstarter pledges or eventual sold units.

Now that’s not to say you shouldn’t do it, you just need to keep these things - and probably other potential problems - in mind before committing. Personally I would love to see it realized to its full potential, but if it’s just going to be a minor gimmick or something without any real effect then I’d rather see it left out completely.

I absolutely get what you’re saying. We’ve been discussing it a little bit more and, given the scope of the project and the fact that we’ve got our hands full, if we do implement the multiple choice stuff it’ll probably be to the effect of getting small, unique rewards like triggering an extra event that won’t have a lot of bearing on the plot, or an extra animation, dialog tree, something of that nature. Being our first adventure game, and us wanting it to feel as close to the classic, 90s style adventures as possible, we’ll probably keep it as a nice little extra if we do implement it… Stories branching too much would be a hell of a headache.

There’s something I’ve been meaning to ask the community, and I’m not sure if it warrants a separate thread, so I’ll just do it here and I’d appreciate feedback on this:

We’re a little bit torn on which style of player/world interaction we want to use. Verbs are excluded, since we don’t want to go that way back in time, and that would make for a gazillion possible unique responses… The two possible alternatives being right click examine, left click use, or the verb coin.

To be honest, I’m very much leaning toward the verb coin, and I wanted to see how passionate adventure gamers feel about it. On the disadvantages side, there is that one extra click that might annoy some players. As for the advantages, if it’s done right it looks and feels great (Grim remastered!), and would work for our game since we’re really trying to encourage the player to examine/explore as much as possible.

So, in short, what’s your favorite, simple clicks or verb coin, and why? Thank in advance!

Bonus gif: here’s Kitteh going into one of her idle animations:

I depends a bit. As long as there is the right click = examine, then I usually prefer the simpler one-click interface. But if there is some good reason for the verb-coin, like extra abilities that are also used often, and which can’t just be replaced by a standard use function, then I’m also fine with the verb-coin, but there has to be a reason for using it.

A third option you could also consider if you have some extra abilities, is to use the standard one-click for use/examine, but then have a second system for accessing the rest, kind of like the magic abilities in Chains of Satinav and Memoria, that is accessed from the inventory bar.

I am fine with either simple right/left click or verb coin - or even one click does all.

The question is rather what platforms do you want the game to come out on? Do you just have PC in mind? If you only have PC in mind complexity is not a big issue, but if you also want to hit say tablets, phones and PS Vita, then I’d try and keep it somewhat simple so that it works well with touch controls.

If you have a chance to I would check out how Broken Sword 5 handled touch controls, which I personally think worked really well.

And as always - sweet gif. Your animation work is just TOO GOOD, Underhill! Oh how I wished I had someone like you on my team

Verb coin all the way, especially how it’s implemented in MI2:SE

Thanks Casper! The gif’s still a work in progress, those whiskers jump around a bit

Yeah, the verb coin does have the advantage of translating to touch devices pretty nicely. For now we’re focusing on PC Mac Linux, but if things go well, we’re funded and it makes sense, we might shoot for a mobile version, too.

The one pretty big problem with the mobile thing, though, is that we’re animating almost everything frame by frame by now, and that probably means a hefty size. Either way, no corners will be cut graphically to fit a mobile release, Gibbous will be first and foremost a computer game.

Well, since you’re developing in Unity, getting the game up and running on PS Vita should be relatively pain free these days. And since you don’t have to make it work at all kinds of resolutions like with mobile it’s actually the easiest port to keep in mind aside from regular PC/Mac/Linux. Aside from that there’s also that added “legitimacy” bonus of having your game out on console.

And who knows, with the quality on display it might even be worth it to try and reach out to Sony’s pub fund program?

Verb coin all the way, especially how it’s implemented in MI2:SE

^ This. Very much.
The Special Edition of Monkey Island 2 has THE best interface ever! And the middle mouse button to bring up the inventory was genius!

On the other hand, I really love how Broken Age did their inventory, I’m very partial to that.

I’d absolutely love for the game to be on consoles, but I’m ashamed to say I never played a point and click on any console. Did anyone play Monkey Island SE on the 360 for example? I’ll probably have to cop that and see how mousing around with the analogs feels like.

What I really love about the PS4 for example is the pointing directly with the gamepad via the light thingie (when you enter text for example). I feel like that would work great in a point and click.

I have Machinarium and the special editions of Monkey Island 1 & 2 on PS3 and they work so-so. I imagine the PS4 would be a much better fit though, with the touchpad and what not. The Vita is basically a tablet+, with both the capabilities of touch screen and buttons.

Does this girl have a doll in the shape of some Lovecraftian monster? It surely looks this way in the picture: You’ll be surprised to know she doesn’t

It’s a creepy red eyed doll.
...but she does want her other doll back, which is very much Innsmouthy.

I’m at home so I have no higher resolution available: 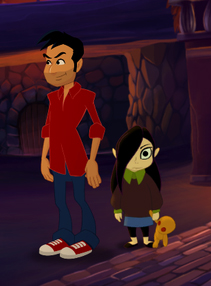 Also, by now we’ve ditched cutout animation almost completely, have drawn and redrawn thousands and thousands of frames, and I love the new, flat cartoony look. 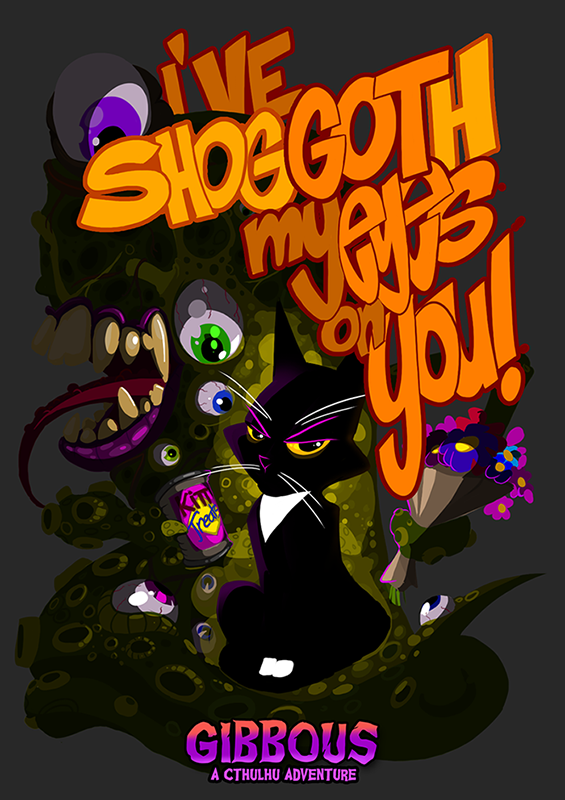