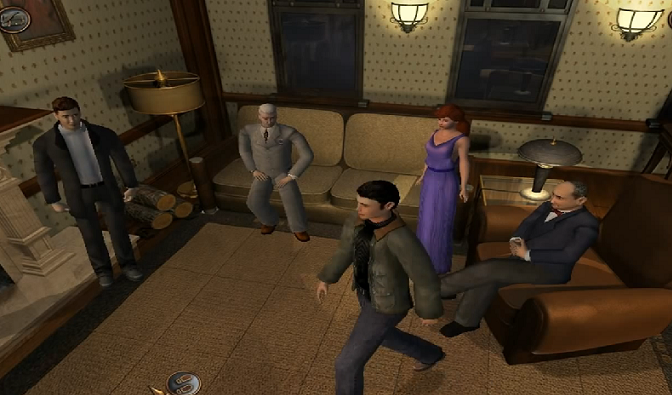 And Then There Were None is one of the first detective novels I read and I still consider it Agatha Christie’s best book, if not the best of the three Christie games. I liked Lee Sheldon’s adaptation. The characters are wooden but the game has the same dark, and very oppressive atmosphere as the book. It even got to me when I had to enter a room with a body laid out on the bed!

I have yet to play an Agatha Christie game, despite the fact that I love her novels (and I agree that “And Then There Were None” is probably one of her best).
I would expect at least a very good performance from the voice actors to produce the same tension that was in the novel throughout detailed description of each character’s thoughts.

I thought it was a pretty interesting game. An insane amount of inventory items as well.

I actually thought a lot of the inventory items were red herrings since I never needed most of them, but there are apparently so many optional puzzles in each chapter (that can easily be missed), that there probably aren’t any *real* red herring items…

I preferred the original book ending over the one in the game, but at least they tried to change things up a bit for those familiar with the original story, so it’s definitely not bad.

How does it compare to Murder on the Orient Express and Evil Under the Sun?

And Then There Were None might possibly not be considered as the best game out of the 3 but I found it to be the most atmospheric & so my favourite. I’ve only read 1 AC novel & am more familiar with film/TV adaptions of the stories. I never remember endings but I’m sure that on completing the developer’s ending in ATTWN you could access the original ending - in narrative form maybe?

...one of the first detective novels I read and I still consider it Agatha Christie’s best book, if not the best of the three Christie games…

Exactly the same for me.

I was really excited about this game and I thoroughly enjoyed exploring the house and the island and meeting the characters from such a good story - and the book really is an excellent story. Obviously things have been changed around and added to what’s in the book - as they would have to be - but to be honest the strength is really the premise of the story and that stays in the game, albeit to a somewhat lesser extent.

However, clearly nostalgia for the book was clouding my vision on my first playthrough. When I tried it again a couple of years later I found it borderline ridiculous as a game. I knew the characters from the book so my brain sort of filled it out for me first time through, but the next time showed some obvious problems with some flat characters, silly and inconsequential puzzles etc.

I know that the player character being able to put huge things into his pockets is a trope in adventure games, but an 18 foot ladder?! I think that was where I stopped playing second time through!

Having said all that it is still worth playing - especially if you have read the book. If you haven’t - then read the book! (You don’t need to to enjoy the game but it’s a great book and very easy reading).

I never remember endings but I’m sure that on completing the developer’s ending in ATTWN you could access the original ending - in narrative form maybe?

You could play the gramophone again, and this time you’d get a confession from the original culprit in the story.
Given the events of the game, though, it lacked the necessary context, so it was more of a shout-out to the fans of the original story, than an actual bonus for those who didn’t know the original…

I played Emily Brent in the play version of the story, Ten Little Indians, for a dinner theater in my area.  It was the second play in which I died onstage, the first being in Ira Levin’s Deathtrap.

Excerpt from the gameplay diary - And Then There Were None:

It is a well-known fact that adventure games, no matter how good or bad, feature at least one crazy puzzle. The puzzle which is so absurd, you can’t hate it. This is the story about one of those…

Chapter 2: It’s early in the evening, the night has fallen and guests are off to their sleeping rooms - an ideal time to snoop around the house! Once I tried to go upstairs to the first floor, though, I was greeted with the comment that I need some sort of a light first. Well, OK, that sounds fair, although I’m still not sure how it didn’t bother you when I was picking up all that stuff in the PITCH-BLACK rooms earlier. The light switches are out of question, as to “not to wake up the guests”. OK, like any experienced adventurer, I’m looking at my inventory - MATCHES! “This is too easy”, I gathered, especially because there were some rags lying around. “I did this “Indiana Jones” torch trick hundred times in adventures, it’ll be a piece of cake…” However, several minutes later, when the game ignored all my efforts for a make-shift torch, I had to give up on the idea. OK, no biggie, let’s go to the kitchen, perhaps there’s something there. Once again, when I wanted to enter the kitchen through the front door, the hero comments that it’s too dark to enter!? Turned out he was lying, because I entered the kitchen without any problems through the back door, but there was nothing of interest there. Few moments of looking around the house, and voila - a flashlight! (did I also mention how I picked up the lamp and several light bulbs earlier that have absolutely NOTHING to do with this puzzle?!). Of course, it wouldn’t be an adventure game if the flashlight had working batteries. At least, it’s clear now - all I need, to solve this problem (climb the stairs, and enter the kitchen-I-already-know-everything-about via the front door) are flashlight batteries!

Minutes, hours, days… were passing, and there was no trace of batteries. OK, honestly, I searched for it for a half an hour, gave up and looked at the walkthrough:

[spoiler]I returned to the game in disbelief - I used the scoop on flour… AGAIN, and the batteries were there, indeed! And Then There Were - FLOUR!

I should also tell you that later I learned there’s SOME SORT of a “logical explanation” behind batteries buried in flour sack, but the damage was already done. Ever since, when my TV remote, flashlight… batteries are dead, I go down to the kitchen, running my hands through the floor in search for some new ones. To those around me, who give me a strange look, I tell nothing - they wouldn’t understand it, anyway.