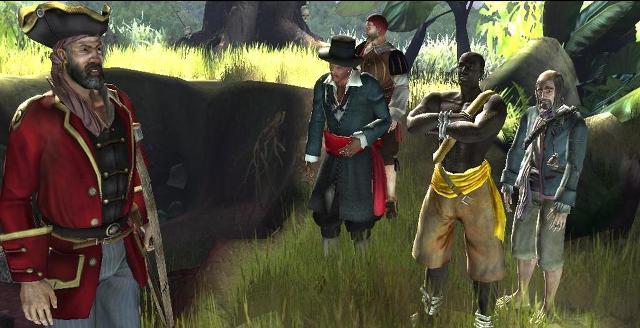 Treasure Island (2009) is a ‘re-telling’ of the most well-known story by Scottish author Robert Louis Stevenson which was 1st told through 17 instalments in children’s magazine Young Folks from 1881 – 1882 before being published as a complete book in 1883.
I don’t remember ever reading it but according to reviews the game despite the inclusion of some new characters & plot elements stays fairly true to the original story.

For me, the game played in 3rd person perspective (as Jim Hawkins) with mainly inventory based puzzles, gorgeous graphics & good voice-acting (mostly) should have had everything going for it but I wasn’t really grabbed by it until I was about a 1/3rd way through.

I’ve neither read the book nor played the game.
But (of course) I know the plot, I’ve seen Muppet Treasure Island.

I agree with chrissie - it starts slow, but it’s not that terrible:

The Good:
Even though the textures are little on the “rough” side, the graphics is incredibly detailed: just look at the gold coins on this one. Also, the lightning and interesting camera positions give the game an additional mood. When you’re standing on top of a citadel, you’ll be seeing the ship far in a distance; when you run down to the pier, you’ll see the dock workers running around their jobs, bringing crates to ship etc; the ship itself is incredibly large, and you’ll need tens of seconds only to run from one to the other side of it while taking a voyage (along with the ship making realistic shaky moves). The music is nice, although there’re hardly more than 3 melodies which are repeated, while the voice acting, especially that of Long John Silver could match the movie adaptations. Several good puzzles…

The Bad:
...while the rest of it is mostly running around until you find the “trigger”. Even though there’s a neat “diary”, most of the time you won’t have a clue what needs to be done in order to progress, so you’ll be stuck until you talk to everyone and inspect everything. In other instance, the good puzzle was ruined because the authors made sure that you don’t miss the “hints” in the gameworld, even before trying to solve it. The game shifts into high gear once you arrive at the island, with one exceptional puzzle, though it could be solved without realizing all the logic behind it - another authors’ mistake. As for the interface itself, it’s a little hard to position your mouse because the scene moves all the time, and the running is clumsy because Jim will sometimes ignore the double click. Also, the narration is a bit “thin”, and there’re no really memorable dialogs or quotes like you would expect, but the game does pay tribute to movies from 1950. and 1990. with the look of the stockade and the ship.

Because of “good looks”, few puzzles and occasional sudden bursts of humor, I’d give it 3,5/5 at most.