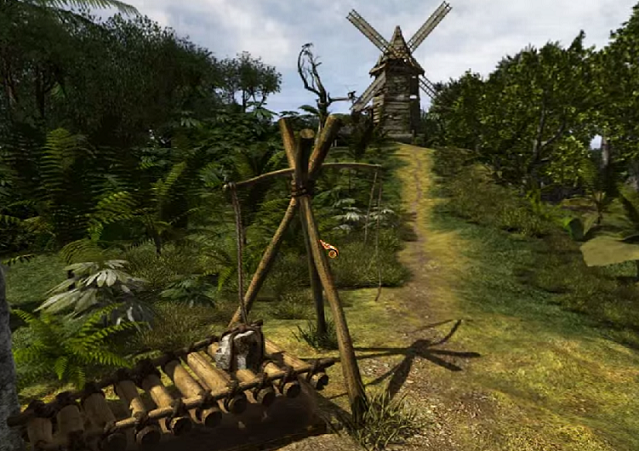 ). Not much story, it’s all about surviving, making tools, finding food, trapping animals. I’m not terribly good at solving inventory puzzles and when a game makes me collect dozens of objects I know that at some point I will have to resort to using everything on everything.

But RtMI has the best and largest inventory ever invented. It was so much fun to find coconuts, clay, oranges, vines, eggs, and solve problems by combining two, three, even four items. I played the game twice, to find different combinations and get the maximum score.

A reviewer once wrote that the background material and most of the puzzles were “stolen” from the book. No copyright infringement in the case of an author who has been dead for more than a century, so I take it he’s saying that the developers are lazy or making it too easy for themselves. A baffling view. Would it be better if the survival puzzles did not come straight from the book? Is Discworld Noir in this sense a better game than the other two Discworld games because it’s not based on existing stories but only “inspired” by Terry Pratchett’s world?  Noooooo!

Return to Mysterious Island is one of the best adventure games from the 2000’s. Loved the game, I should replay it again sometime.

Blame my father: he was so outraged by his offspring reading only strips (it’s “comic books” for the Americans, even if there’s no humo(u)r whatsoever in those) that one shiny day he forced me to go to the library and pick up some real book to read. Instinctively I reached for Jules Verne (The Mysterious Island was the first, I liked the title) and Karl May and thus started my reading career.

The Mysterious Island is a great book that not only made me interested in reading but in science(s) also because Verne’s characters (with there skills and education) made a hell lot of good stuff on a deserted island, having (almost) virtually nothing at the beginning.

I’m torn on most Kheops games. I love their concepts but their crazy puzzles can annoy me sometimes. Combine the banana peel with the monkey hairs and a stick and get a fishing rod! The multiple solutions are great however, and make the game easier than it would have been.

While I have read the book, somehow I haven’t played the game yet. Definately have to sometime, since it totally looks like my kind of thing….

“RMI takes place after the events of Verne’s famous 19th century tale of Captain Nemo and the five men originally stranded on Lincoln Island. Not only is no prior knowledge of the novel necessary, but anyone who has read the book will know that Kheops had to fudge the ending of Verne’s story in order to allow a “Return” (although, to their credit, they cleverly justify it during the game). And since the game assumes that Mina doesn’t know the island’s history, you’ll be piecing together past events along with her. So while readers of Verne’s novel will take additional pleasure in revisiting familiar locations in graphic form, newcomers won’t feel at all left behind.”

I read the book when I was young, several times, though not as many times as I read Robinson Crusoe.

Playing the game though I soon realized theory didn’t translate to reality, as I completely failed the puzzles. Had to walkthrough so much of that game, the cannon section during the ending was especially annoying.

I started playing the game a couple of years ago, but once I got to having three full screens of inventory, then it simply started to become overwhelming. The inventory system is not bad, in fact I quite enjoyed it in the beginning, but in my opinion they simply overdid it, and destroyed the game because of it.

Regarding the book, then I read it as a young boy, in fact I read all of Jules Vernes books as a young boy, this one was however not my favourite, and I can only remember very little from it.