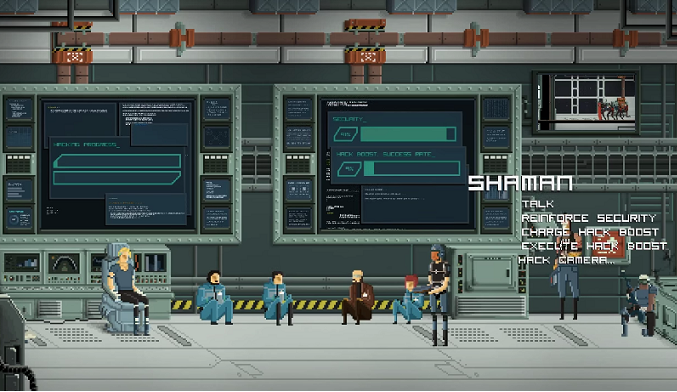 I bought Gods Will Be Watching (2014) by accident. I got it mixed up with another retro game. I know how that sounds, but I swear it’s the shameful truth.  Anyway, I soon found out it was not the adventure I’d read great things about, but hey, it’s a game and I’m gonna play it!

A couple of hours later…

I have two things to say about Gods Will Be Watching.  I will never understand people who claim the retro-look is a form of art. But some are of course more pleasing to the eye than others. This one is ugly and the animations are choppy. Worse, you choose an action from a list that slides, yes, slides into view in a decidedly modern way. Maybe they used different pixels for the list?

Secondly, it’s frustrating in the extreme. An exercise in patience. Trial-and-error without a clue wasn’t enough for the developers, so they added randomness and also made sure you can’t save the game. Get killed? Then it’s back to the beginning of the level for you. I believe there are five levels of clueless decisions. I won’t see level five.

I didn’t buy by accident but I’ve should done more research… I found the premise intriguing but had the same problems you had. Game is just a lot of frustration with it’s trial-and-error gameplay.
I’ve read they released a patch to make it easier but I never went back to it.