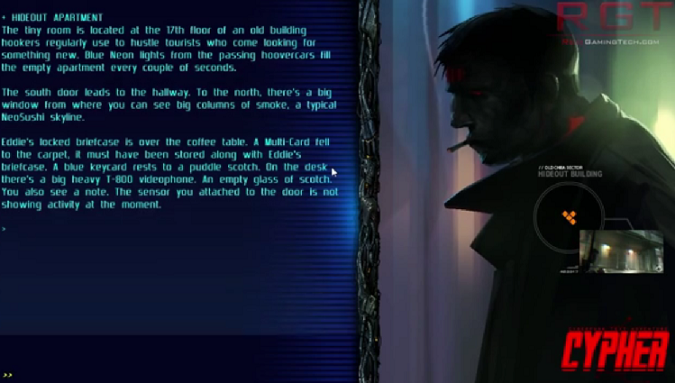 Ever since you came back from the moon colonies you’ve been struggling to get into the smuggling business again. Things aren’t as easy as they once were though, especially without your old pal Eddie around. It was him who brought all the major players in the market to do business with. And boy, did they line up to hire you. Even the Yakuza used to pay almost twice the standard rate for moving passcodes through the international borders in your Synapse. All you’ve got now is a French crook that goes by the name of Lime, who cares more about setting up his own deals than bringing new quality customers on board to work with. You always knew working with that French bastard was trouble, only you never realized how much until one of the deals he had setup went wrong.

Text adventure of the month is Cypher (2012).  Most reviews mention a Blade Runner atmosphere but this code and synapse stuff reminded me of Johnny Mnemonic. Cypher has very nice graphics with some animations, like the smoke from the protagonist’s cigarette. The music is good too. I liked the noir, dystopian sci-fi world where democracy has gone the way of the dinosaurs and big cities were turned into big companies. Tokyo is now called NeoSushi City.

It’s the really bad parser that made me stop playing. Modern text adventures should have a modern parser that doesn’t leave you hanging. I later read in reviews that the indie developers had improved it somewhat, so who knows… I might finish it one day.