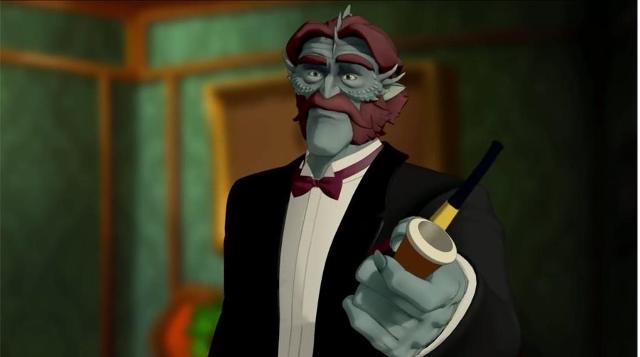 Today’s screenshot is of William A FitzRandolph from The Next Big Thing (2011), the owner of MKO Pictures that make horror films starring real monsters. The protagonists of the game, reporters Dan Murray & Liz Allaire, after attending the annual horror movies award ceremony find themselves drawn into what I thought was an excellent mystery.

Apart from the presence of a few lit jack-o-lanterns the game doesn’t have an obvious Halloween theme but it is set in late October & it is a.k.a. Hollywood Monsters 2 so seemed very appropriate to start the week with!

At least it has a ginger protagonist. The world needs more of those.

How about it Karlok/Chrissie? Ginger Protagonist Week starting monday?

I know FitzRandolph isn’t one of the protagonists & he’s not quite ginger but will he do?

I really like this game. It was originally intended to be a remake of 1998’s Hollywood Monsters, but ended up being pretty much an entirely new game (though a few of the original puzzles remains). This means it doesn’t render the original redundant, but it’s a better game through and through.

I’m wondering if there will ever be any announcements of new games from Pendulo Studios? It’s been dead silent (with the exception of the hidden object nonsense) ever since the terrible GamesPlanet fundraiser campaign for Day One failed miserably (in large part due to a complete absence by Pendulo themselves). Then again, trying to find information (in English) about the ongoings of a Spanish adventure game developer is like searching for a needle in a haystack. Their desire to reach fans beyond their own borders seems limited at best.

Liz Allaire is one of my favorite adventure game characters. I like the wacky way she handles stress.

Liz Allaire is one of my favorite adventure game characters. I like the wacky way she handles stress.

I also really liked the whole 40’s screwball comedy fell to the whole game, and especially to the relationship between Dan and Liz. And the scene where Liz explores her own mind, that is just brilliant.

As for Pendulo Studios, then I fear that they have simply given up, and that we might never hear from them again.

I really enjoyed this game too.  I really loved the first one too. Some people didn’t like the “action” elements in the first game, but, I am terrible at action and they were doable.  Good puzzles, good dialogue and lots of fun.

Bought this game on disk and after installing found out I had to go to some online server to register before I could play. I didn’t play it and haven’t bought a disk since.