Phantasmat is a mystery horror Hidden Object game developed by Codeminion and released in 2011. I consider it to be one of the classics – in my mind it holds a place in the casual game pantheon similar to that held by Scratches in the adventure game pantheon.

As the story begins, you are driving along a deserted country road, and just as you realize that you are lost, strange things begin to happen. Lightning flashes, handprints appear on your windshield, and the rear view mirror reflects something that can’t possibly be behind you. Your car leaves the road and hurtles over a chasm, ending up a useless wreck. You walk about, wondering what to do, until a young woman with lovely eyes and a helpful manner finds you. She directs you to a local hotel, where you can use the phone to call for help. 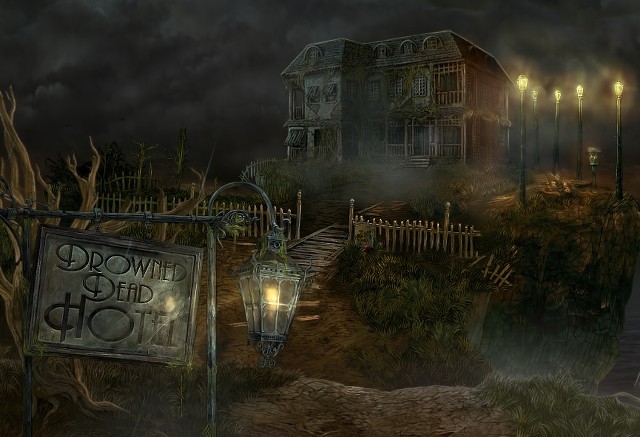 As you will soon determine, this is no ordinary hotel. It’s perched on a cliff above a town that was flooded when a dam broke. You will encounter three characters at the hotel. 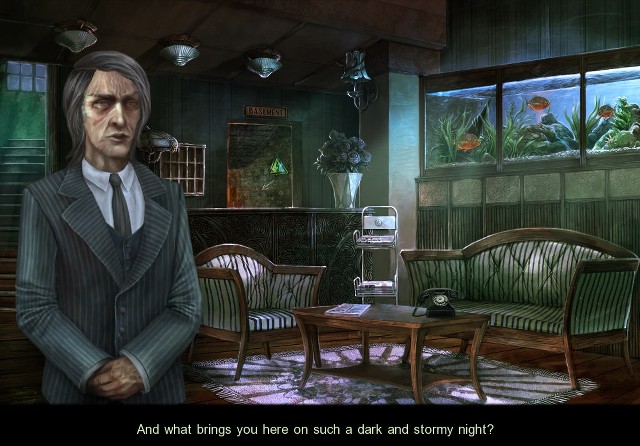 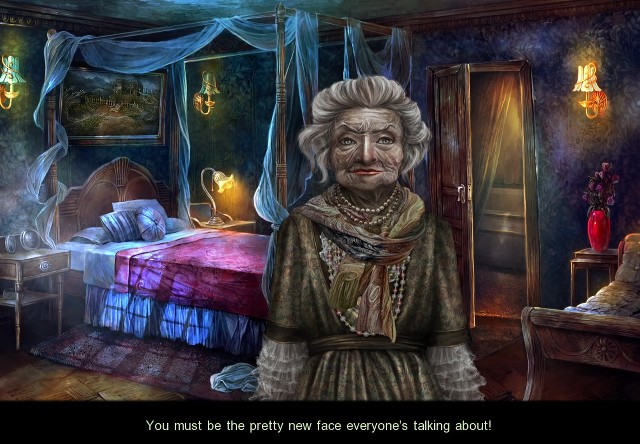 And THE GIRL you met earlier.

You’ve heard of love triangles? Well, this is a deception triangle. Everybody involved has something to hide. The proprietor is formal, distant, and sarcastic. He regards people with barely-disguised contempt. The socialite is chatty, manipulative, and dwells in the past – a glorious time when she was a celebrated beauty. The girl is desperate and frightened, but won’t say why. She thinks you are her ticket out of this creepy place.

We’ll now begin to play Phantasmat. For this first section start at the beginning and play until the socialite has told your fortune. If possible, finish this first section before Friday, October 24th, when the second section will start.

2. For those who haven’t been following the Casual Playthrough Voting thread, and are starting the process with this thread, there are two versions of Phantasmat, the Special Edition (SE) and the Collector’s Edition (CE). You can join the playthrough by playing either version.

The SE version of Phantasmat is available on Amazon (US), Big Fish Games, and from the developer’s website (Codeminion).

The CE version of Phantasmat is available on Big Fish Games and from the developer’s website (Codeminion).

I like the hidden object screens in this game. They have the same creepy, horror feeling as the rest of the game. There are some obscure definitions, though. My tendency is to play the hidden object scenes until I’ve gathered all the low-hanging fruit. Then I switch over to the match-three to get the one or two remaining items.

I agree, Tim, about the voice acting. It is very good for all three of the characters but the Proprietor’s is superlative. His use of inflection is masterful.

I would really like a souvenir towel from the Drowned Dead Hotel.

The voice sounds familiar, but the name given in the credits didn’t ring bell.

Heh.  I noticed something that didn’t register with me before.  The hidden object scene on the porch has a small blue figure from Ancient Quest of Saqqarah, Codeminon’s match 3 game.

I wasn’t going to join in since I kinda blew most of my game budget for this month, but it is on sale for $4.99 at Big Fish today.

Welcome to the playthrough. Have you played the game before? If not, there are a few of us here who have. Just post a question if you run into any difficulty.

I, like Lady Kestrel, saw something interesting. At least I thought I did. (LK - assume your referring to the “device” atop the chair back…?)

Once you’ve retrieved the boat hook and ring the doorbell the proprietor walks by the left window in the door looking very much like he does at the end of the game. But when he opens the door he looks “normal”.

Edit: The scene went by so quick I couldn’t grab a screenshot, and didn’t feel like starting over. BTW Becky - Nice job on those intro screenshots. How many times did you have to replay to get those exact subtitles?

I finished the first section, and I don’t like my fortune very much.

I love the creepiness of the loading screen when the eyes suddenly open.  The eyes in some of the HO scenes are equally spooky, especially when you don’t notice them at first.

Clubberella—in my experience, game budgets are meant to be blown through.

if you figure out how to get a souvenir towel without having to spend a night at this creepy place, let me know.

Tim—I caught the screenshots on the first attempt, but I was unusually lucky.

Lady K—is this the one? Is the blue figure the guy with the spear on top of the chair? 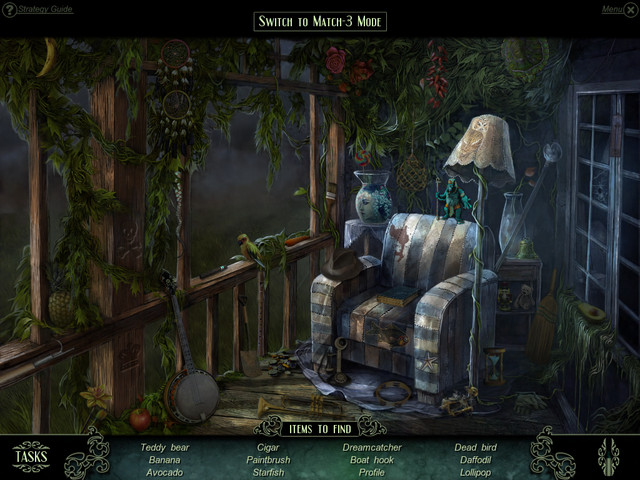 It’s one of my favorite HO screens because it blends right into the rest of the environment. I love the seaweed hanging from the ceiling.

Welcome to the playthrough. Have you played the game before? If not, there are a few of us here who have. Just post a question if you run into any difficulty.

Thanks! This will be my first time. I’m fairly new to adventure/casual games in general, so I’m glad I found this forum.

I finished the first section, and I don’t like my fortune very much.

I love the creepiness of the loading screen when the eyes suddenly open.  The eyes in some of the HO scenes are equally spooky, especially when you don’t notice them at first.

There are some serious “eye” issues with several of the HO scenes. However there is some randomness. I.e. I’m not getting the same definitions, ergo not exactly the same creepiness as I did the first time I played the game. Example: the last time I played one of the definitions was earthworm which I pulled from the eye of one of the doll’s heads by the telescope. Didn’t get to enjoy that experience this time around. (Not that I’m complaining!_

Yes, it’s that little blue figure on the chair.  The game has an Egyptian theme with 12 temples, each one with a different god and a different mode of matching.
Here’s the loading screen for the game:

Here’s one of the game screens in Thot’s temple, the last of the the twelve I have to finish, and the hardest because the colors have to be grouped to turn all the between areas white.  The blue fellow acts as a cross between a narrator and a cheerleader and often throws magic powerups at the board.  It’s a time waster but fun.

My pics are a bit big.  Just right click to see them in a new window.

I remember really liking Phantasmat the 1st time I played it & it was amongst my favourites but at the time I was playing a lot of CGs with HO screens so I know I switched to the Match-3 for a lot of the HO’s in this one.

I’ve just had my fortune told so have completed the section! This time I chose to play through all of the HO screens (I only used the hint button once then kicked myself!) - it was well worth it for the subtle animation that appears in them particularly 1 screen with a lot of doll’s heads where the eyes open & close - very creepy!

I love the voice-acting especially of the proprietor & after reading the in-game news articles I’m wondering whether I’m dead myself after my car-crash - I just can’t remember from playing before.

So far the characters are very intriguing & the music & sound effects are wonderful as are the graphics!

I’m having technical issues with little help from BFG so far, but I managed to get to the fortune telling part while playing in the “Test” mode of my compatibility troubleshooter.

For some reason the suggested changes don’t work if I do them manually and stop working after I leave the test mode. Wiiiierd. If anyone has any tips besides the ones BFG recommends on making this game work with Windows 8 I am all ears!

I did get to see that particular squirmy scene Rtoony described.  I’m enjoying the game so far!