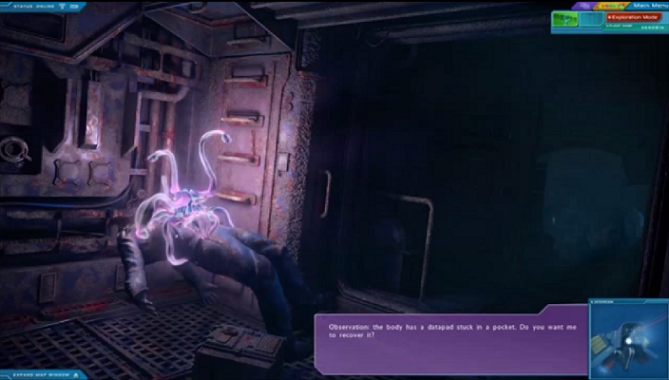 When J.U.L.I.A. was released in 2012, I was sure this was not my type of game. Player comments were mostly negative too, although the AG reviewer gave it four stars. And then the developers did a remake, which I bought on an impulse last week: J.U.L.I.A. Among the Stars (2014). I finished it this morning and had a very good time with it. Even found an easter egg.

I love games with open worlds where you can explore a different planet or spacestations when you get stuck. The story grabbed me, especially in the first part of the game. To my own suprise, I liked most puzzles and only used a walkthrough for the “pipe connecting” ones I find tedious because I’m not good at it.

I did another quick round of reviews just now and some of the negative comments made me laugh. One reviewer called the graphics “basic”. Huh? Eyecandy!

and only used a walkthrough for the “pipe connecting” ones I find tedious because I’m not good at it.

Dude what’s wrong with you? Pipe connecting puzzles are only second on the “awesomeness” scale to mazes!

I liked the original JULIA but not enough to buy the 2nd and 3rd remakes. Or is this the 4th? I’ve lost track. I do wonder if they’ll ever get around to making a new game or just keep remaking JULIA.

Dude what’s wrong with you? Pipe connecting puzzles are only second on the “awesomeness” scale to mazes!

No way! Second place is reserved for SLIDERS.

Then again I’m a weird person, I love Miro and Munch too.

J.U.L.I.A is still sitting in my pile of games to play - I really must get around to it.

I hate mazes!, pipe-connecting puzzles I don’t mind but I do love a good slider!