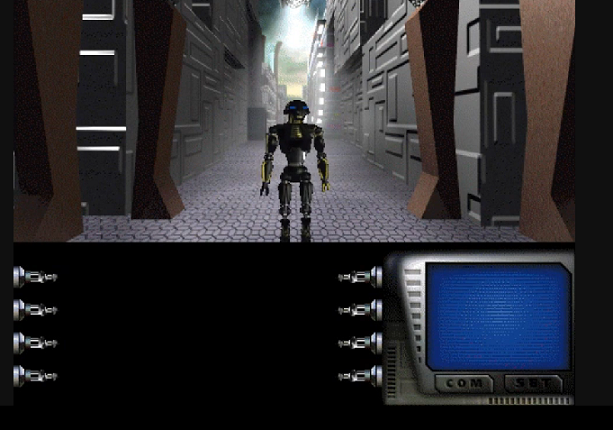 Robot City (1995) is based on Asimov’s famous Three Laws of Robotics. You’re one of two humans in Robot City, where a murder was committed. And of course you’re a suspect, cause robots are unable to harm a human being.

Prove your innocence and unravel the mystery. I loved Asimov’s books when I was younger, read most of them. So I simply had to play this adventure.

It’s a nice game with a good story and several endings based on your dialogue choices (I only saw one ending), but how I wish it had been a text adventure. Would have been perfect, the repetitive graphics don’t add much and just try mapping a city which for reasons unknown changes all the time! Absolutely infuriating for someone with my sense of direction.

I’ve started reading Asimov in my adult years only and I think it still awesome (I know in teen years fandom is a lot bigger thing). Only read a few robot books so far, thinking of actually following his recommended “reading order” and going through all of the books. I really like his style of writing, it’s pretty dry but it’s smooth and somehow still warm and funny. I’ve read some of the novels in English and some in Finnish and at least the translations I read captured his style pretty well, have to remember the translator for future use.