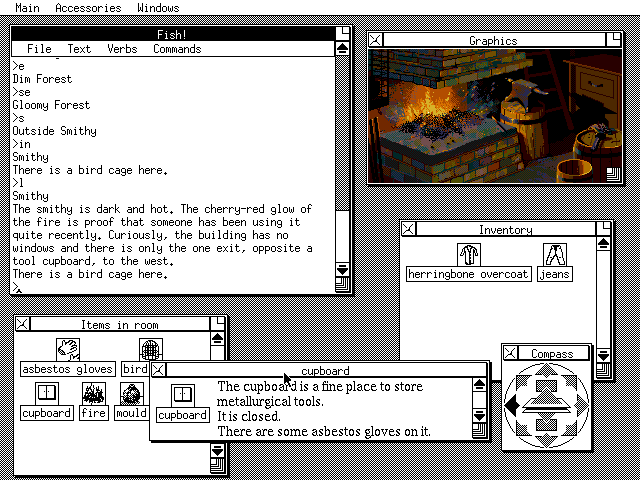 Fish! and a few other games were enhanced for the Collection. The original was just text with pics you could turn on and off. The enhanced version is on the threshold between IF and graphic adventure, with drop-down menus and typing reduced to the bare minumum. The various windows can be opened, closed, resized. It’s great to have a compass and I love the “hotspots” window with the (clickable) objects in the room.

Fish! is weird. You’re a secret agent who happens to be a goldfish and you’re supposed to save the world from a bunch of evil bastards called the Seven Deadly Fins. I had fun with the fins, but don’t remember much about the plot and puzzles.

*Anybody got any moral objection against downloading a game you paid money for but can’t play anymore? Good, I don’t either.

There’s something “warm” with these graphics! (even in a tiny window) - I don’t know what it is, but I know I was stunned at the beauty of Wonderland, too (for a 1990. release) when I first saw screenshots of it:

I guess Magnetic Scrolls had been a company seriously ahead of its time.