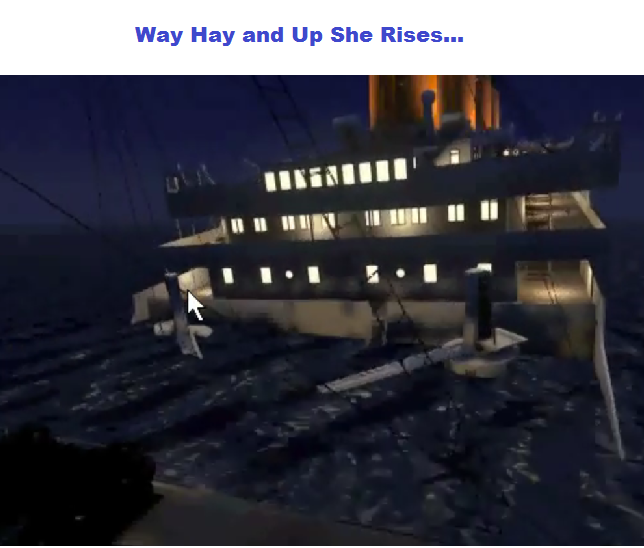 By special request, Titanic: Adventure Out of Time (1997). I guess I was too late to catch people rearranging the deskchairs…

Walking around a replica of the Titanic and trying to change history is fascinating. It’s not really suited for a community playthrough, or I’d nominate it.

Can you change history? Oh yes! Many different endings depending on what you do.
I think it may be too non-linear for a CP, but I’ll nominate it anyway.

That’s interesting Karlok, I had avoided this game because I thought it was a retread of the story (and the boring movie), but stopping it sinking sounds like fun!

Sorry Oscar, you can’t stop the ship from sinking.

But you can change some aspects of history.

Where is Leonardo DiCaprio? I feel CHEATED!

Where is Leonardo DiCaprio? I feel CHEATED!

In 1997 he was busy making the movie Titanic. If only he’d known he could have played in an adventure game! I’m sure he feels cheated as well.

I’m not doing a ship series. Just one adventure on a ship. No, not Eye of the Kraken. Not Love for Sail either, they’ve both been used, like Titanic.

A game based on the biggest and best movie ever? No thanks! Obviously a cash-in. Couldn’t they come up with something original? Leo DiCaprio should sue them for $1 billion dollars!!!1

I know (I think) you’re joking, but there was a similar situation with Pirates of the Caribbean (2003) game from Sea Dog - it was released few days before the movie, and had ABSOLUTELY NOTHING to do with it. I thought it was a good game, very well done, and if it cashed-in on suckers who bought it only to see game versions of Johnny Depp and Keira Knightley - it was well deserved!

I’m not doing a ship series. Just one adventure on a ship. No, not Eye of the Kraken. Not Love for Sail either, they’ve both been used, like Titanic.

BTW, I told you I know what game it is. Zobraks will be excited.

BTW, I told you I know what game it is. Zobraks will be excited.

So tell me the name. Preferably in PM, we don’t want to ruin it for Zobraks.

BTW, your inbox is full.

I’m excited most of the time.

I’m excited most of the time.

no, you are sleeping most of it

Yeah, he’s dreaming of ships in the arms of Morpheus on the Herculania…

This game was originally released before the movie, and then disappeared from shelves in American stores for a while. I remember searching for it (I think at Electronics Boutique) in vain, and finding a kindred spirit also looking for it—in this case, a child whose accompanying father couldn’t believe that adults (like me) might be interested in a video game.

When the movie was a tremendous hit, the game then reappeared on store shelves and, from what I could tell, sold quite well.

I’m not doing a ship series.

Not even if we ask politely and provide a fitting song???