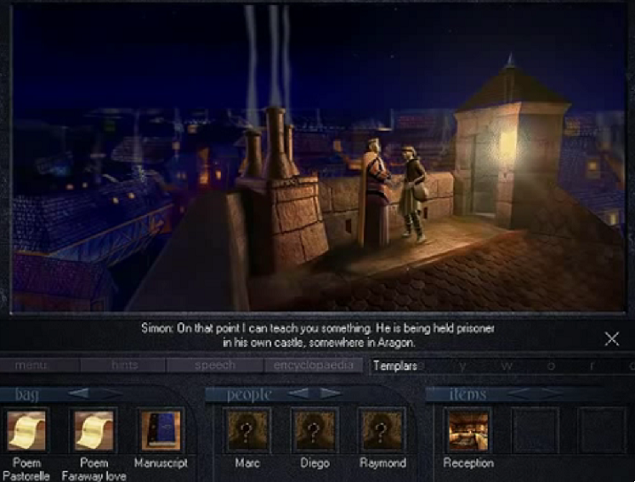 Pilgrim: Faith as a Weapon (1998) by Axel Tribe is an edutainment game about the religious movement of catharism in thirteenth century France. The cathars opposed the teachings of the Catholic church so it goes without saying that they were persecuted.

I quite liked the game. I prefer its outdated graphics to the current retro-pixelated look. Beautiful backgrounds, skies, houses. Character models not so good, but you can’t have everything. Great medieval atmosphere with the plague, the inquisition, crusades, politics, intrigues. I learned a lot about the cathars and the politics of those days, although I have forgotten most of it by now.

The writing is very good, probably because the game was based on a book by Paulo Coelho. I know his name causes some people to break out in a rash.

But the prose of Pilgrim is a nice change from the ordinary adventure fare.

Memory speaks a foreign language of which we don’t get all the subtlety. This is what makes our perception of the truth so uncertain and our judgements so changeable. We should be much wiser to treat our memories as carefully as we treat our dreams.

Yes…? Something you wanted to say but forgot to post?

People are strange… when you’re a stranger…

Must be a great game, where one of the character is named after me. Do we get to control all of them?

I have an anecdote about Pilgrim - when I first arrived to write for some local review magazine, I was speaking to the editor in the office (a living room, actually). Some other guy suddenly opened the door from the other room, looking at us from the bed, all sleepy, dazed, confused and delirious, just as he wanted to say: “SHUT UP! Let me sleep!”, but said nothing, and shut the door. I asked the editor what’s the story, and he replied: Ahh… he played Pilgrim all night. He needs to review it for the next magazine issue.

So, it must be a great game if people are staying up all night for it.

Must be a great game, where one of the character is named after me.

Sshhhh… no need to boast about your namesake, he’s not worth it.

Do we get to control all of them?

...but said nothing, and shut the door. I asked the editor what’s the story…

Well, you know what they say: Nobody expects the… ! 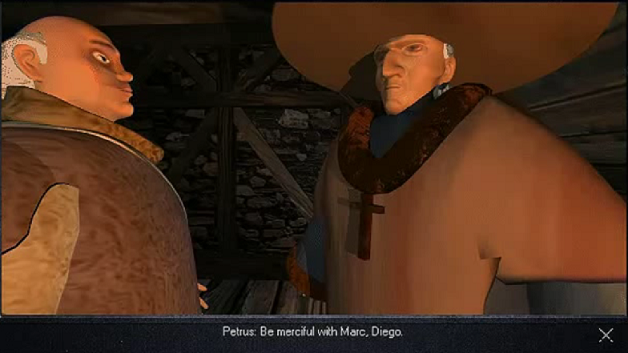 Favoritism! Can you post a game with me in it next Karlok? (let’s see how good your game knowledge is, heheh)

Favoritism! Can you post a game with me in it next Karlok? (let’s see how good your game knowledge is, heheh)