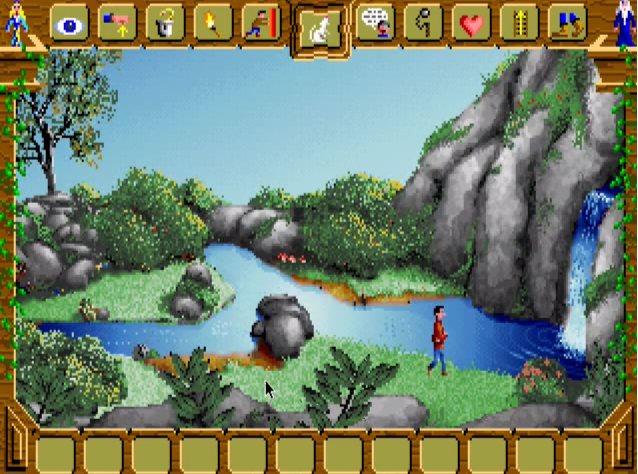 This is the first screen of Armaeth: The Lost Kingdom (1993). The game with the most convoluted interface ever. Rows of clickable icons. I think you had to click one of those icons to make the next row appear! Although I haven’t seen it mentioned anywhere, I also remember vaguely a large number of complex key combinations.

I may have seen one or two other screens, but I certainly didn’t get very far and the first screen is actually the only one I recognize.  The graphics are attractive but by 1993 I was already getting somewhat fed up with fantasy adventures of the King’s Quest type and I hadn’t discovered LucasArts yet. In my memory Armaeth was the last adventure I gave up on before everybody started talking about a totally novel game called Myst. The end of an era for me. I never went back to Armaeth. My loss…?

It looked obsolete even when it came out.
I’ll pass.

P.S. Armaeth is great for stumping the uninitiated in screenshot guessing threads though.
Too bad Harald couldn’t preserve the (teeny-tiny) picture

If this was “Match that screen” thread, I’d say it looks like this: 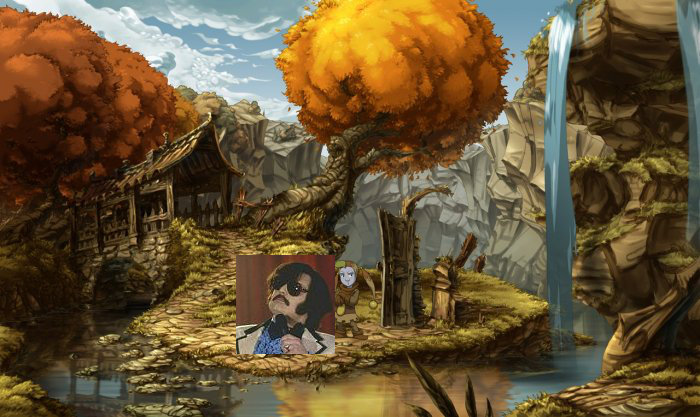 BTW, what are those “Merlin and young sorceress” icon in upper corners for?

Blonde girl on left of row of icons: left click on her to display a description of the current screen.

Old man on right of row of icons: left click on him to cycle through the different rows of icons.

Great. One more thing: eye is for Look, hand for Pick up, padlock for Use (?), pushing for Push… but what, on Earth, is a torch for?

You Spot, me torch.

Now you tell me what a heart is for.

PS: I forgot to mention the worst of all: rows of icons, complex key combinations, and you still have to TYPE TEXT.

Ok, I fixed the Spot. Now, the torch?

Now you tell me what a heart is for.

I guess it’s for “Fall in love” with a random object on screen?

Ok, I fixed the Spot.

Spot = torch. What more do you need to know?

I guess it’s for “Fall in love” with a random object on screen?

Didn’t work for me.

PS: Is that fifth icon really push? Might also be open door instead of simply use. They have a different icon for climbing stairs as well.

PS: Is that fifth icon really push? Might also be open door instead of simply use.

Nah, his stance and the legs & bottom behind looks like he’s pushing it. Either that, or he’s really sprinting to open the door.

They have a different icon for climbing stairs as well.

Now I’ve heard everything. Do we get one for a “get naked and swim” as well? It would be ashame if not with a scene like this.

P.S. Armaeth is great for stumping the uninitiated in screenshot guessing threads though.
Too bad Harald couldn’t preserve the (teeny-tiny) picture

I have no memory of this whatsoever! Good thing you keep a meticulous archive of those threads, Zobraks. Or have an astonishing memory. Anyway, I think I got as far into this game as most people: I wandered through a bunch of screens, couldn’t make head nor tails of the interface, and finally got eaten by a bear.