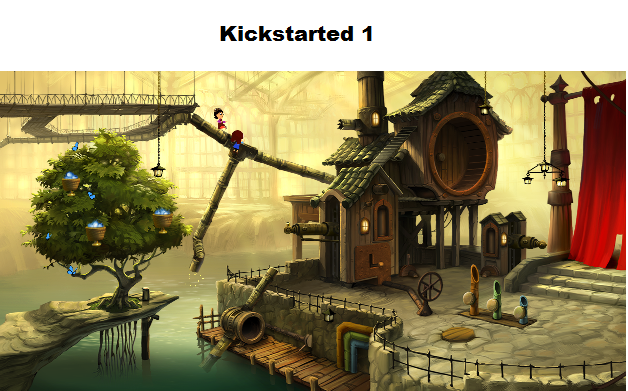 Inspired by Tommit’s thread, with the title Released Kickstarter adventures retrospective, I decided to post pics from a few KS games I have played. The first one is Lilly Looking Through (2013) by Geeta Games. The developer is Steve Hoogendyk, who was responsible for the Amateria world in Myst Exile.

When cute Lilly wears a pair of goggles she has found, she goes back in time. Very useful for overcoming obstacles in the here and now. It’s a relaxing, charming and beautiful puzzle game with lovely music and nice animations. It’s also very short. I hope there will be a sequel some day.  Am I a happy backer? YES!

I didn’t back this one but did buy it some time after release. It was fun at first and I liked Lily’s character but I started to find it repetitive and, because of this - coincidently at Karlok’s scene - finished it by watching a YouTube play-through. Had there been greater variety in the game I’d have really enjoyed it (apart from only being able to save at pre-ordained points).

LILLY is an hour of a breathtaking experience .
still remembering the coloring bells puzzle difficulty which kinda broke the flow of the game, but yet it didn’t shake its awesomeness by anychance.

It was a fun and beautiful little game, the puzzles with the goggles mechanic were ok, but kind of felt incomplete and rushed in the end.
Didn’t regret backing it.

LILLY is an hour of a breathtaking experience .

You don’t mean that hour literally, do you? Lilly kept me busy for several hours.

It was a fun and beautiful little game, the puzzles with the goggles mechanic were ok, but kind of felt incomplete and rushed in the end.
Didn’t regret backing it.

Yes, there’s hardly any story and yet they managed to end Lilly on a cliffhanger.

Maybe not literally but ‘several’ is a big number

,yea I wasn’t counting but it was a one shot ,so I would say the playing time is around 1-2 hours at the most.

I was stuck for a loooong time at the bell puzzle you mentioned. But it is definitely a very short game.

I enjoyed the game very much and do hope it gets a sequel soon.

Seems I am the only one who was really disappointed from the game. I found it really short, really easy and illogical plot involvement (haven’t really understand what happened in the end). Some smart ideas, yes, but no more than that…

I loooved the character animations, in theory, but thought they were to the detriment of the puzzles. I was stuck for ages on the bubble puzzle, not because I didn’t understand it, it just took ages to go through the puzzle actions and figuring out the bubble sizes.

The art style, animations and character design is absolutely amazing, and I thought they perfectly captured Lilly’s age, even though I felt she was really, really agile for a young child, but there just wasn’t enough other things for me.

The game ended on a total cliff-hanger, just when we started to see a semblance of a story, and the ending puzzle was extremely tiresome. I felt the “transfer colour from the eggs” puzzle was way too cumbersome. (I didn’t especially like the mushroom jumping puzzle either)

I surprisingly didn’t have any issue with the bell puzzle, for some reason the colour puzzles just came naturally to me.
The only time I had to look up a hint during my play-through it ended up being me apparently not having tried a combination I was sure I had tested.
Though, the in-game hint system was ludicrous. The game did not need a highlight marker, there were only a few interactive items in each scene. I’d much prefer some puzzle hints instead.

I finished the game in 1 hour 45 min according to Steam, so I’m definitely on the shorter side of play time.

I’m sort of happy with the outcome, I thought there were several unique elements to the game that made it worth backing and worth having been released, but I did feel they sacrificed the length a bit much.