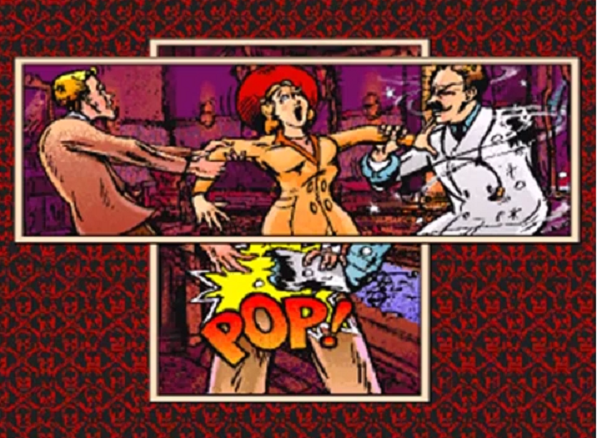 Murder Makes Strange Deadfellows (1992) has the atmosphere of an Agatha Christie mystery in the twenties or thirties, cliché characters included. Relatives gathering in a ghost-infested mansion for the reading of the will, but dear dead uncle apparently made a new will, so where is it?

In the screenshot sleuth Nick is fighting with a ghost to protect his love interest. He already tore off the ghost’s arm.

I didn’t know you could that to a ghost!

Basically, it’s a radio play with pics, no animations. The voice acting is good. An advantage of radio plays is that conversations sound much more natural and people interrupt each other just like in real life. Usually in adventures the character who is supposed to be interrupted stops talking in midsentence, followed by one or two seconds of silence, and then the interrupting character starts talking. Weird. It’s infinitely better to record all the actors together, like in FMV cut scenes and in this radio play.

Gameplay consists of choosing which part of the mansion to visit by clicking on a map, and discovering clues by listening and participating in conversations. People and ghosts drift in and out of rooms and you have limited time to find the new will and the culprit, so you will have to replay the game more than once. Which I didn’t mind cause I enjoy playing detective.

One of those games I’ve always wanted to try and never did.
Nice review. Me like it.

Never heard of this. Sounds interesting.

One of those games I could always identify in “Adventure game scene… uh, game” thread because of a distinct graphics. You know, if someone had actually posted it.

I’ve come across the title of the game through browsing screenshots (for dastardly quiz pics!

) & it’s one that sticks in my head as I really like the artwork. Your description of the game Karlok now makes me want to play it!

Why are the guys pants going “pop!” Do I want to know ?

Never heard of this. Sounds interesting.

The first game in 18 days you hadn’t heard of before means AGSotD is taking the Bastich route...?

Why are the guys pants going “pop!” Do I want to know ?

Nick’s pants and everything in it are fine, it’s the ghost’s arm going “pop” because Nick tore it off.

Chrissie and Timovieman, I had fun with the game but if you don’t bump into the relevant clues all those replays can be annoying. BTW, I liked the first game better: The Case of the Cautious Condor(1989). Probably because the many ghosts were a bit too much.