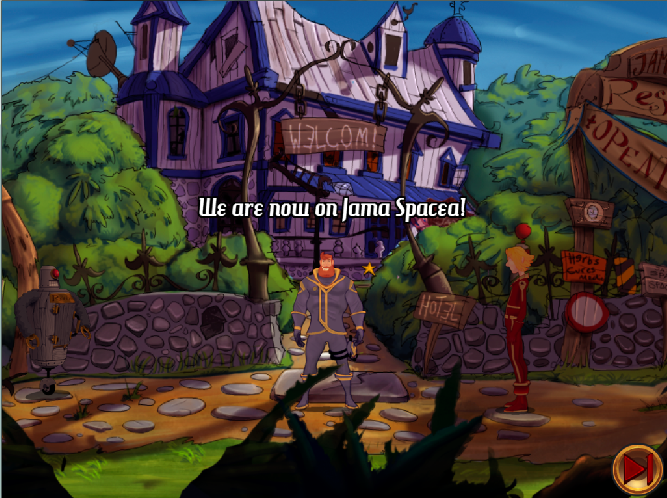 Kaptain Brawe with on the right his ensign and on the left his wooden “Rowboat”. There’s currently a Kickstarter campaign running to fund a sequel to Kaptain Brawe: A Brawe New World (2010). So what do people think of this game?

I like the graphics (yeah, I’m a cartoon buff), but can’t tell about the rest of the game.
In the olden days there used to be a small (~40 MB) -and short- downloadable free game with the same name*. Some time passed and they made it into a full-fledged AG.
That’s what I vaguely remember.

*I still have it somewhere around here.

So what do people think of this game?

Here. (I know how much you like to use Google Translate

“The story, and the game length are barely satisfactory. Even with short playing intervals, the experienced players will beat it in just day or two, while things near the end feel rushed. Perhaps it shouldn’t come off as a surprise, as Kaptain Brawe was to be the episodic game originally, and the story (even though it doesn’t end on a cliffhanger) feels like part of a much bigger potential. The biggest problem is that the characters are poorly developed, and we’re not fully presented with their motives. Despite all, Kaptain Brawe is brave enough to put the charm of classics like Flight of the Amazon Queen or Space Quest into the new perspective, and I’ll look forward if the authors manage to give us slightly better second epis… uhh, I mean, the sequel.”

You reminded me of an old adage we have here: “Speak Serbian, so the whole world can understand you.”

Why would he speak Serbian? This is, after all, and English-speaking forum.

Any complaints about my command of Servian? Contact Google Translate!