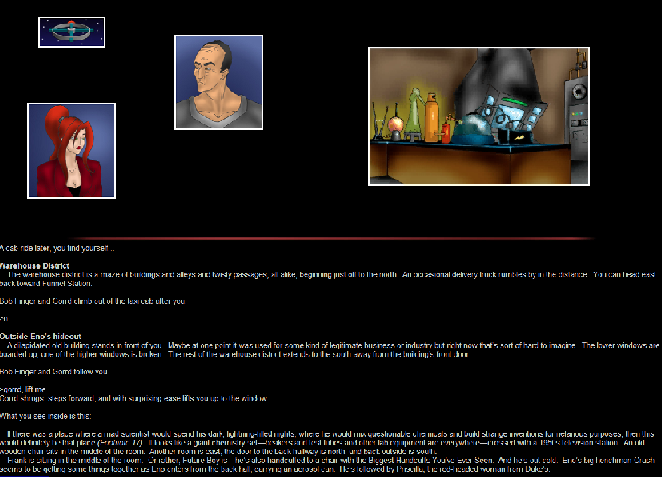 Future Boy! (2004) deserves to be saved from oblivion. It is an excellent text adventure with pics of places, people and objects, and even animations. But it’s the sounds and speech that set it apart from the usual IF games. Future Boy is your alien roommate, a Spiderman type of hero who brings criminals to justice but gets himself into trouble with his homeland. It’s your job to keep him in one piece, and of course to take over his job and stop villains from destroying the world.

Text adventures have come a long way since the days of Infocom, so I was surprised when the parser gave me some problems. Everything else is good: story, writing, puzzles. Goode voice acting, which really adds to the atmosphere. You can ask people questions in the familiar IF way, but they also come up with entertaining stuff of their own. When I was trying to break out of prison, my not very bright cellmate piped up every four or five turns with amusing nonsense:
I had a brother called Chet. Is your name Chet?
Being in jail is kinda like… I don’t know. Ever been in jail before?
Ninety-nine bottles of beer on the wall…
Maybe I should have been a doctor instead.

Future Boy! can no longer be purchased. Beats me why. Reviews were good and how time-consuming can it be to sell a download. The web site is still there though and I read elsewhere that a few people managed to get the game by emailing developer Kent Tassman.

I was always intrigued by this game.

I was surprised when the parser gave me some problems.

What were the problems?

I have a very limited experience with parsers (haven’t played the text adventures of the olden days). In fact (beside a quick shot at Zork I) the only game with parser I have played was Starship Titanic (where it’s only part of the fun and not the main interface) but I had so much fun communicating with those robots through parser that I wished to play some interactive fiction. Then the lazy part of me won. As usual.

You can ask people to follow you, like in most text adventures. When you need their help for instance. Of course they can refuse and they often do.

But when they say okay, they are supposed to follow you to other locations and twice they didn’t. I copied the command in the hints (excellent hint function!) to the letter and was still stuck. Might be a parser bug. Not a gamestopper but took me a long time to make it work.

I do recommend Future Boy, especially if you had fun with the Starhip Titanic parser (this one is much better by the way). Are you sure you know what you’re letting yourself in for? The game keeps score of your playing time and turns. My score was an impressive one thousand eight hundred and ninety-eight turns in seven hours and five minutes. Some puzzles were too hard for me.

Thanks for the info, pal.

Are you sure you know what you’re letting yourself in for?

No, I’m never sure about anything. I don’t even know what’s life all about. The meaning of it all escapes me.

P.S. I even had to look “let in for” up.
God bless The Dictionary of Phrasal Verbs.

Are you sure you know what you’re letting yourself in for?

No, I’m never sure about anything.

I don’t even know what’s life all about. The meaning of it all escapes me.

The Meaning of Life is a human invention. Life doesn’t care about meaning.

I’ve had this one sitting in my to-be-played pile for a long time now.  I think I’ll move it up in the queue and give it a try soon.