Y2K: The Game (1999). What to say? I guess I’m still trying to figure out why this game took 2 CDS considering how short it is and how small the environments.

The game has an odd interface that’s somewhat similar to Gabriel Knight 3. It’s a third person game and you use the camera to look around, except you can’t move around the room with the camera. It’s locked in place. It can also be rather annoying in that you have to be in certain views to interact with things, making even really obvious things easy to miss sometimes.

This is also one of those games that gives you nothing but repetitive canned responses over and over again for just about everything you try to examine. It’s a pretty poor game. The humor was lame as well. I don’t recommend this one.

100 pieces of eight to anyone who can think of 3 other games with the titles starting with letter “Y”.

To keep this post adventure related, here’s Yoshi in Mario is Missing. 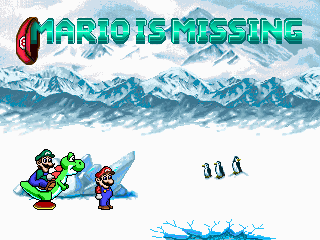 100 pieces of eight to anyone who can think of 3 other adventure games with the titles starting with letter “Y”.

Okay - I admit it, I had to look that last one up.

Y2K is a very strange beast, obviously made to cash in on the year 2000 (and all the fears it brought). The main hero is a geek with a zero personality who is always stuck in a stupid pose in the middle of the scene

Puzzles are of your standard Myst sort with some inventory thrown in. But it is still worth playing for the music (some really good ambient pieces, although they can be easily copied to the hard drive) and awesome voiceovers by Dan Castellaneta and Michael Bell. I quite enjoyed the game for those reasons at the time.

I would not call Yellow Brick Road an adventure. It’s an action game for children.  Children may like it, I got bored.