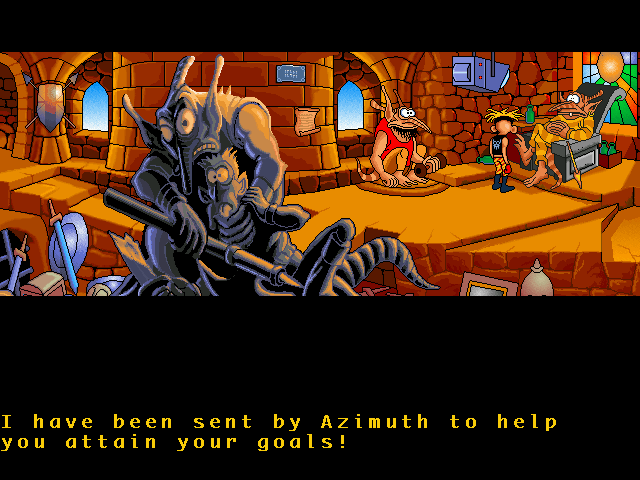 I can’t think of a single nice thing to say about Woodruff(*), so I’ll leave the floor to you guys.

(*) OK, I guess some of the puzzles were interesting?

As a maniacal Gobliiins fanboy I’m a bit ashamed to not have played this one. The strongly mixed opinions make me hesitant because I’m afraid I won’t like it.

Also played some Goblins games but not this… yet.

great choice of a game

, but i thought you would go for the tobozon ..

I have this one and I like to try it, but there’s no way I can get it to run in that [email protected]#$ Win7. Actually I can get nothing old to run. Did I mention that I hate Win7?

I have this one and I like to try it, but there’s no way I can get it to run in that [email protected]#$ Win7. Actually I can get nothing old to run. Did I mention that I hate Win7?

1) Win 7 is great (not half as nice as Mac OS X, obviously, but definitely the best OS Microsoft have made).

2) For Woodruff, use ScummVM.

Woodruff is a wonderful work of pixel-art. The cartoonish post-apocalyptic world where people enslaved mutants is already something. And so is the main hero - a grownup with a child’s brain, whose teddy bear was murdered, and so he craves for revenge. He discovers the surreal world for the first time, and it often results in many hysterical animations and jokes. I can’t think of any other game that features so much pixel animation.

At the same time, a serious plot is unfolding. Woodruff fights totalitarian (and often absurd) system and tries to free the mutants. There is a lot of satire, several subplots and even a love story, so you never feel like solving one screen straight after another, unlike Goblins. The world is large and open for exploration.

While there are many classical inventory puzzles, there are plenty of great ideas implemented into the game. There are musical notes to learn in order to access doors and phone people, there is a spell-making system, you have to develop some mental skills and travel to the past. There is also a grand make-up puzzle and a weather channel you have to watch in order to make use of wind and meteorites.

All this involves a lot of exploration and experimenting. A number of puzzles are way too obscure, so some people find themselves lost and cheated. But other than that it is a very unique and underrated game that Pierre Gilhodes - the creator of Goblins and Inca - calls his best game ever. He planned a sequel, but it’s hardly possible nowadays.

Well, here are some nice things about Woodruff

My review of Woodruff

Since you had not much good to say about Grim Fandango, this was pretty much expected.

I liked the weirdness and quirkiness of Woodruff and tSoA, its unfathomable puzzles (call me a masochist but I like tough puzzles) and the crazy humo(u)r and general atmosphere of the game (even the music and sound effects of WatSoA scream slapstick!).
I have a thing for crazy cartoony adventures and WatSoA is one of the best there is.

It’s not a Boozook - it’s Blount from Goblins 3! But I have some Woodruff gifs to share. That’s how much I love the game!