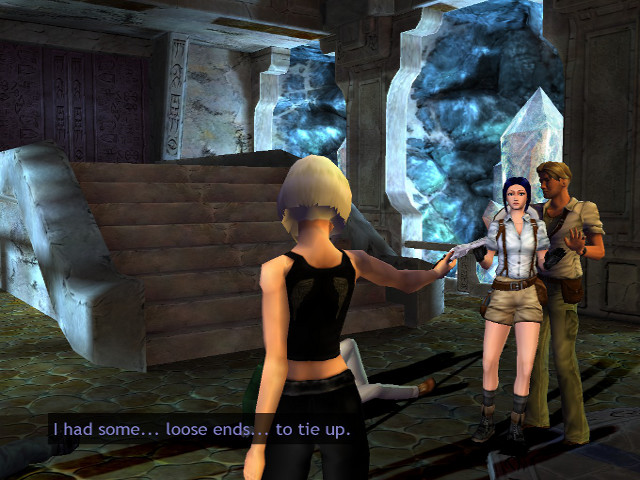 When it comes to Broken Sword 3, it’s easy to remember only the box puzzles (and that ridiculous scene where you’re supposed to get all teary-eyed because some guy you have no reason to care about decides to sacrifice himself), but there was also plenty of good stuff, and a real Indiana Jones vibe. Also, it looked a bajillion times better than BS4, which is kinda sad.

Never got around to playing BS3. I have the game (bought it at a sale when it was still relatively new), but I never got it to work. All I got was a black screen on startup, and that black screen crashed every time. Same thing when I bought a new PC a few years later.

Will try a little harder to get it to work when it comes up on my list of games to play, though…

I like BS3 in despite of all it’s crate pushing flaws!

Some well written and funny characters and some nice throwbacks to the first game. In a way it’s kind of like Back to the Future 2 in that it is trading heavily off good memories of the first one but still ends up being enjoyable even if it cannot live up to the incredibly high standards of the original. Marty McStobbart, Dr Emmett Collard and Biff Lobineau are worth watching anyway!

BS3 is the best BS game hands down imo! It’s got a fantastic story, wonderful dialogue. Some really great chracters (and Kuru that sacrifice scene almost brought tears to my eyes so you’re dead wrong there) a couple of awesome, original puzzles (the omega temple comes to mind) and to top it al off a truly epic score. And hey you can bitch about 3D all you like but it looks pretty darn good in this game. The only thing about BS3 I don’t like is the very clucky interface and the timed sequences which were often timed to tightly. But otherwise I’d say this is a timeless gem. Shame so very few people share this sentiment.

Am I the only one who actually liked pushing crates ? and I even liked the last crates puzzle!

(which even I didn’t expect!) The crates you push so that George can climb on at Glastonbury.
I do like BS 3, not as much as the charming 2d ones, but definitely worth playing!

I really enjoyed Nico’s “acting” as seen by George at the theater when they meet again, the mean-side of Nico dressed as Petra, the fact that the grand master was actually alive added a twist to the story, the funny-usual argue between George and Andre, the ending with Nico by the tree making fun of George,
and so on…

And speaking of Petra’s loose ends

, there are some things that I haven’t sorted out yet:
I’m still wondering if Petra pulled the sword from the water. Is she really dead?
Petra said at the beggining she knows Nico. But from where?
Any theories?

About Bruno - Yeah, a bit teary-eyed, but George does know the guy from way back at the hotel Ubu since BS1.

About BS4 -I still can’t quite see it as part of the series.I consider it a game with a few good bits, but doesn’t fell like Broken sword and I sometimes wanted to punch Anna Maria)

I’m curently doing a research on the Spanish Civil War .I’m finding out what I can in advance, because I know it’s related to the BS 5 plot.

Am I the only one who actually liked pushing crates ?

George: Charles, you’re the best: You’ve actually listened to fans and removed the crate puzzles! Say, what’s that behind you?
Charles: Uhh… that’s nothing.  Don’t pay attention to it.

Pushing crates was fun the first 7 times or so, but it was really overused to the point where i would start yelling at the game every time i saw a new crate

My dog when I was a kid was named Petra.

I really don’t remember much about BS3 (nor BS4, but maybe that’s for the better).  Quite looking forward to playing through the entire series again before BS5’s release.

Pushing crates was fun the first 7 times or so, but it was really overused to the point where i would start yelling at the game every time i saw a new crate

I agree, although I’d still say it didn’t take that much away from the game enjoyment when I’ve played it (but perhaps that’s because I didn’t finish it, and the most boring crate puzzles were still to come

). Isn’t it the same with Broken Sword 4? - that one of the biggest flaw is the repeating hacking mini-game?

Quite looking forward to playing through the entire series again before BS5’s release.

Seriously???
Good thing I’ve got the originals, then…

I really enjoyed Broken Sword 3 - loved the better graphics & the story but I couldn’t help thinking that it didn’t quite have the same ‘magic’ as the 1st 2 games!

I’m surprised BS3 seems to have gained popularity in the last few years - at least people still don’t seem to care for the fourth game, which is god awful. Personally I don’t like 3 very much, but the story is okay, just boggled down by garbage design which ruins the game.

Quite looking forward to playing through the entire series again before BS5’s release.

No worries there, I don’t like the portraits they added to those versions.

I actually liked BS3, except the obvious mentioned crate puzzles, and the clunky control. Good puzzles, interesting story, cool environments, and good voice acting. I actually just recently did a replay of BS3, 4 months ago, and I must say it is still holding it’s ground as a solid adventure game.

Seriously???
Good thing I’ve got the originals, then…

Yes, they simplified some puzzles, but they also added new content. Hazel Ellerby returned to do additional voices as Nicole for new segments where you also control Nicole. Dave Gibbons even did new artwork for it. The Director cut begins one day before the opening scene in the original version. You may wanna give the directors cut a miss, but you’ll be missing out.

Well I for one liked the crate puzzles and I don’t know if the very simplified and unimaginative term “crate puzzle” does the game justice. They were much more than that. First of all there were different kinds of crates, not just the traditional white timber variety. There were brown crates, grey crates, black crates, even a delightful red ochre color of crate. And not just wooden crates - stone and cardboard top off the list of cubical materials that you could push around. The puzzles were creative too and not just of one kind. Sometimes you had to climb on top of a crate to reach a ledge by moving it into the right place, and other times you needed to create a passage through the crates by pushing them out of the way. Even when not involved in a puzzle the sheer presence of the crate helped and comforted you throughout your journey by their everpresent crate-iness.

Personally I think anyone who doesn’t like BS3 and BS4 because of the so called “crate-puzzles” is out of their mind, but each to their own.