How to mix Real-Time strategy with HORROR ?

What do you guys think of RTS mixed with Horror? Is it possible? Is it a bad mix for PC gaming communities?
I want to try out this design on my project(Chromosome Evil) but first I take a look at the past:

“They are billions” - very good RTS game with a nice Zombie theme but very far from being a horror game.
“Classic Xcom/Ufo” - the best tactical game that got a nice horror vibe/feel to it but not in real-time
“Darkwood” - good thriller & horror but not an RTS

- Empathy for characters: This is not an FPS so emphasizing with the situation will be a bit hard but I plan to achieve that through Example:1. Each character will be unique( equipment/stats and most important personality, personality is shown trough out randomly generated speech text in result with triggers and situations) 2. The game got Perma-death .3 Character customization

- Adrenaline of making a choice: I want to make players feel each choice matters and increase their adrenaline by not only having perma-death but also saving game cannot be done at any time and it also costs resources according to how many people you got in the squad.

- Phobias: I plan to use as many phobias as possible, for example, there will be a room full of bugs that player must cross (optionally) to get an extra reward

- The mystery of the unknown: many random generated algorithms and difficult based on how you play the game

- Mechanics & visuals: for example, we have a monster that got eggs on his back, from those eggs worms come out and if not killed fast the worms keep growing larger and larger. Another example: a huge tentacle monster that only hides in the dark and snatches player characters. Anxiety can be very fast achieved with such gameplay especially if the player will have the possibility to barricade himself inside buildings and try to survive the coming monsters

- Theme/plot: I am going for a Lovecraft-alien invasion - demon zombie plot

And since today is #screenschotsaturday here are a couple of screenshots. 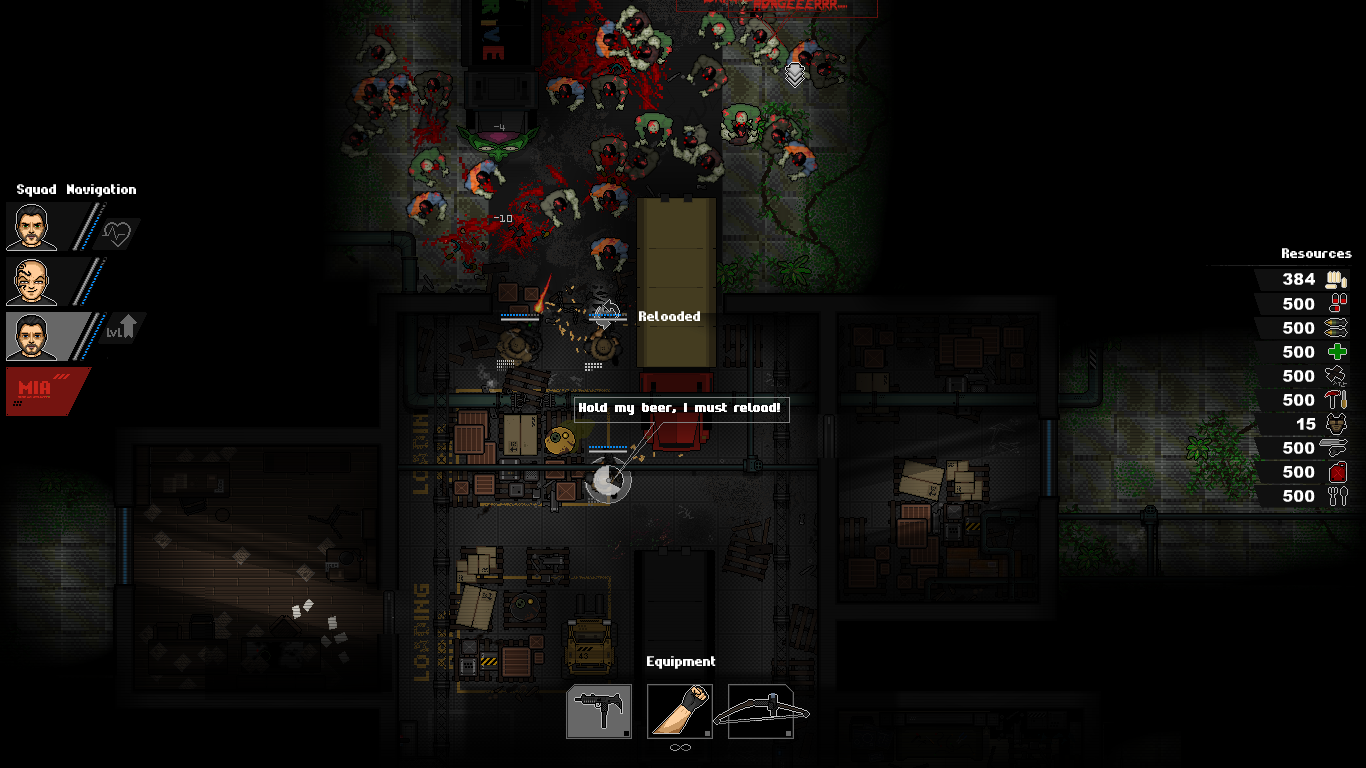 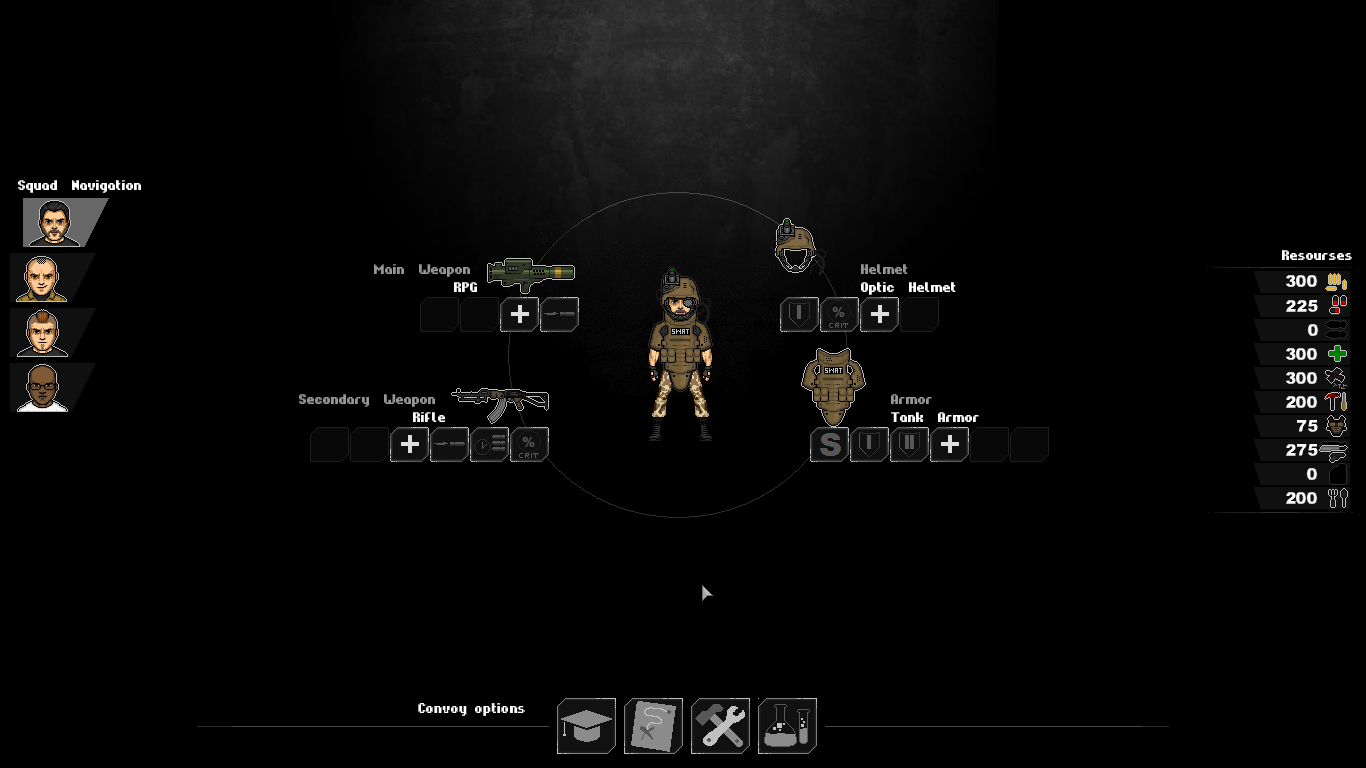 Small Update
Since our game is made with performance in mind, all shadows and lights must be hand-drawn/animated, I now resumed some of the light “systems” polish. On the good side, with such a system the game will basically run even on a potato computer.

My aim here was not to create realistic lights but rather atmospherical ones.
- top layer got an alpha object with main shadow shapes
- all walls and big objects generate a shadow PNG
- light object shapes used to cut through the generated wall shadow
So each time a map starts the game will generate one huge shadow / light layer PNG. We also got light animations that we had to fake through some torture procedures.
So here are a few possible shadow/light combos that we use in the game. Hope you enjoy 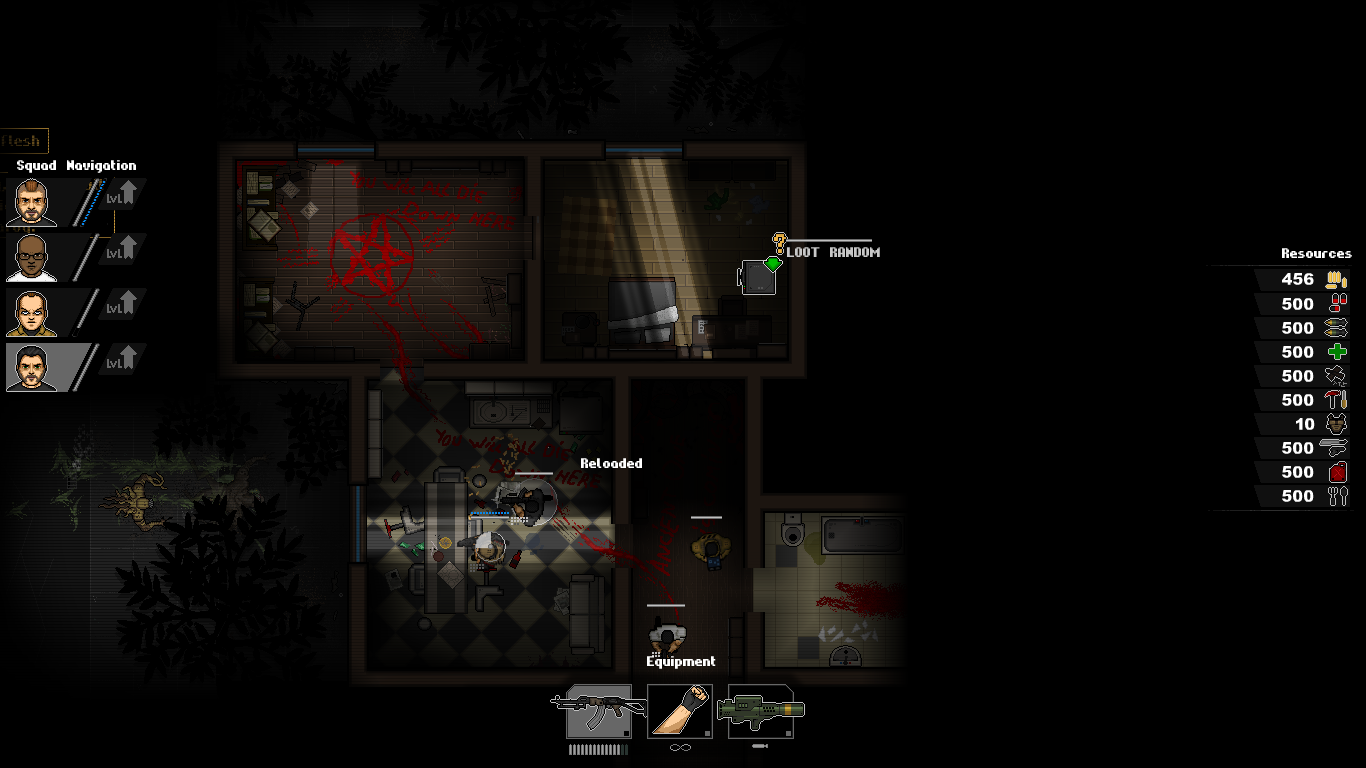 In regards to what you said, yes horror can change some things but it all comes down to how you execute the concept or you risk turning it out in a cliche by just having a monster theme and calling it horror

I was thinking of a new way of boosting the horror element by adding prelude maps for scenarios, for example, this prelude map is for that huge boss fight a few pages earlier. Note that this prelude map has no enemies and the player will not know this. this map is supposed to:
- offer hints about how can you beat the monster(aka you need long-range weapons)
- offer information about the game lore
- some character development
- tension slowly increases by fear of the unknown and mystery. 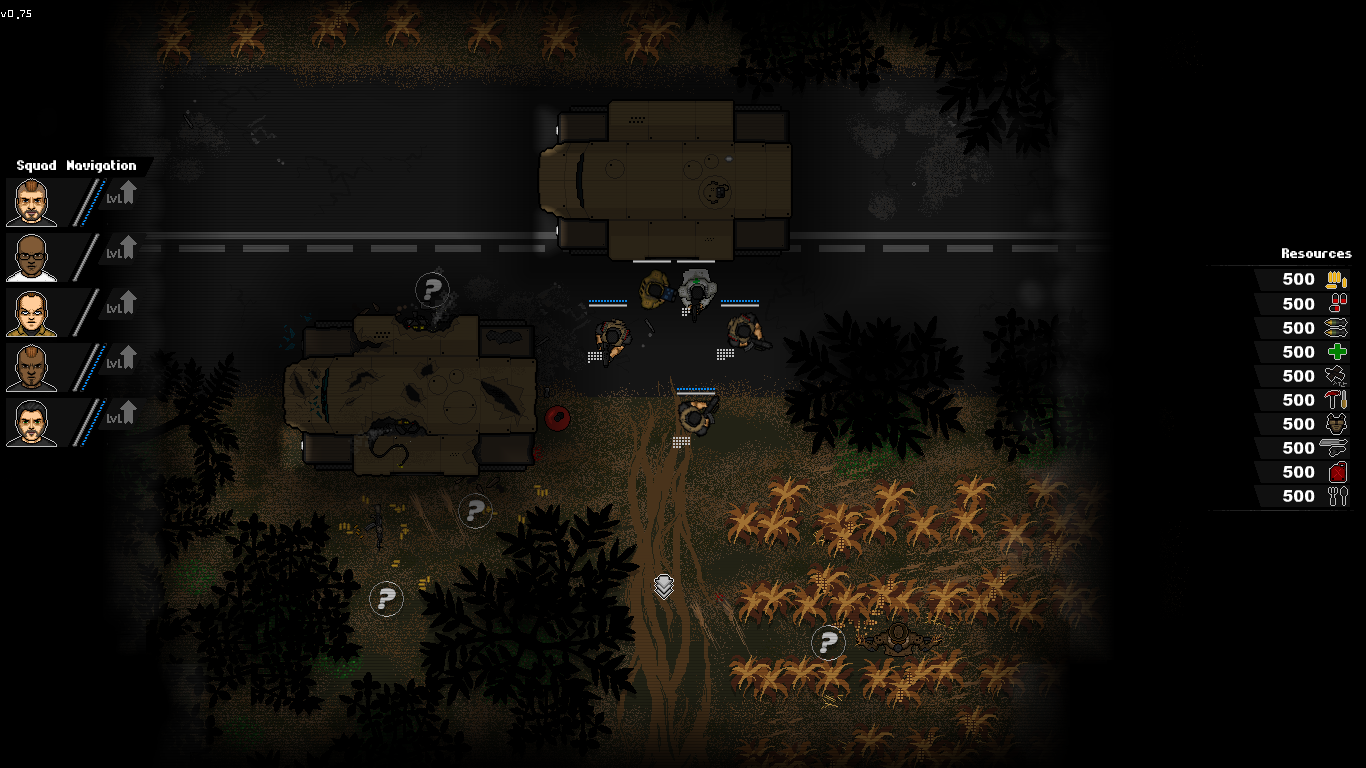 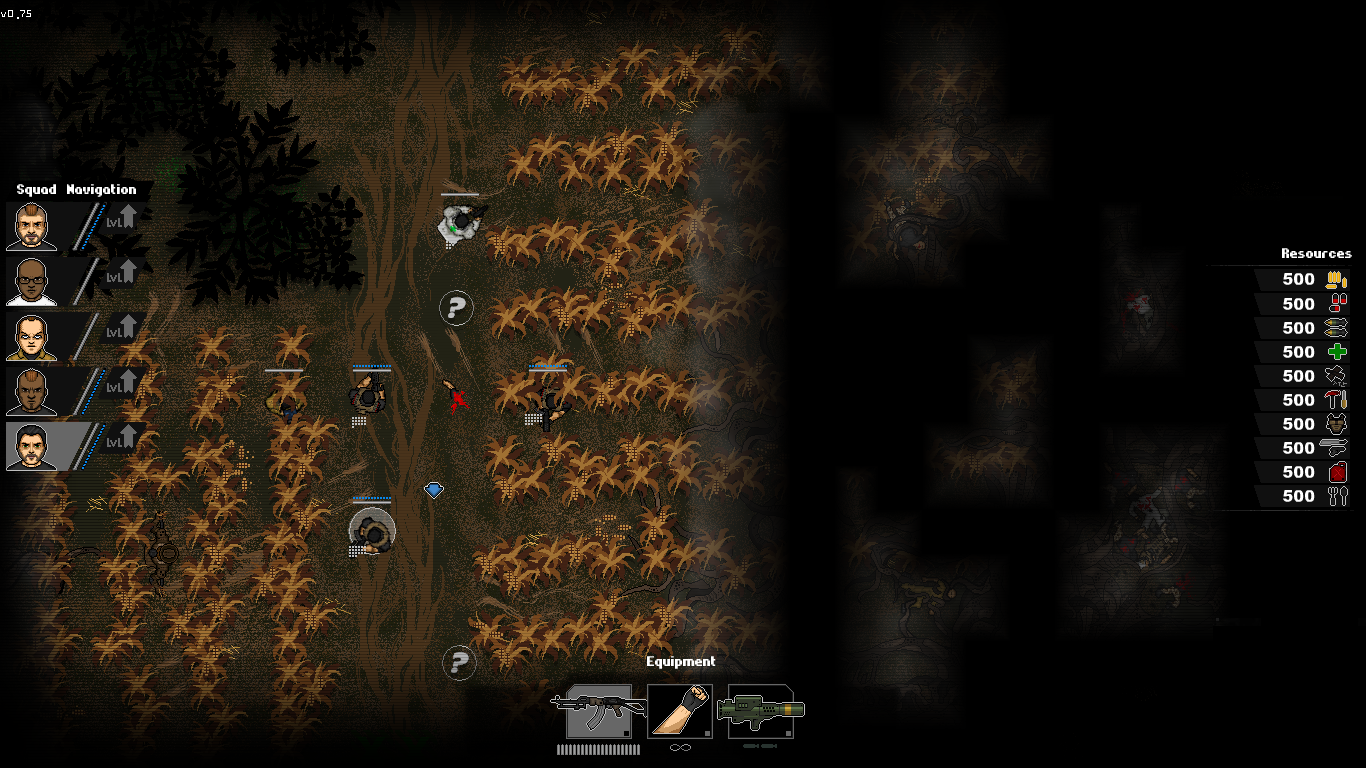 And here is the next map where the player is in a house and outside is just 1 huge tentacle monster that snatches player soldiers one by one. The player can never see the entire creature so I boost the fear of unknown element and claustrophobia, I also tried to be fair so the player can win 2 ways, either by killing the monster or by escaping through the underground tunnel(both lead to different game paths) 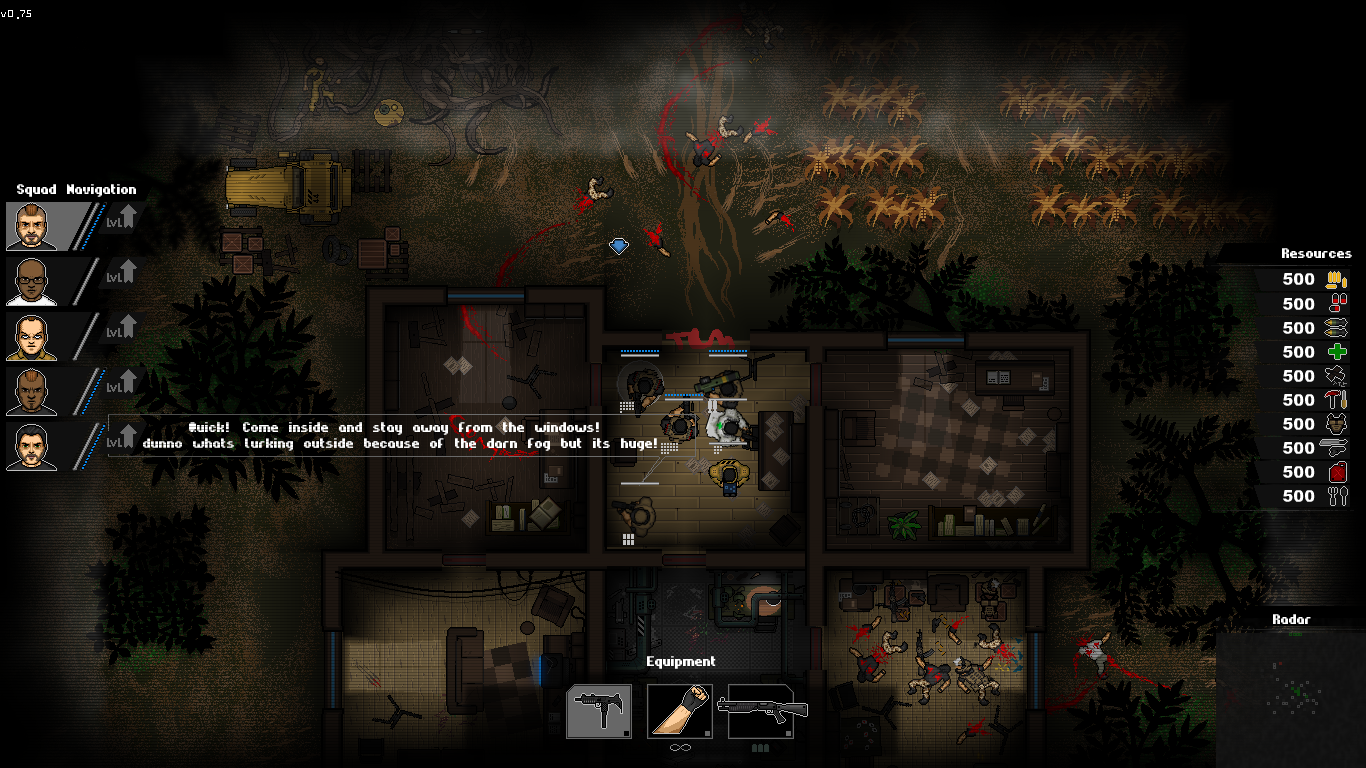 In regards to what you said, yes horror can change some things but it all comes down to how you execute the concept or you risk turning it out in a cliche by just having a monster theme and calling it horror

Yes, but some people love horror so much they will settle for that.