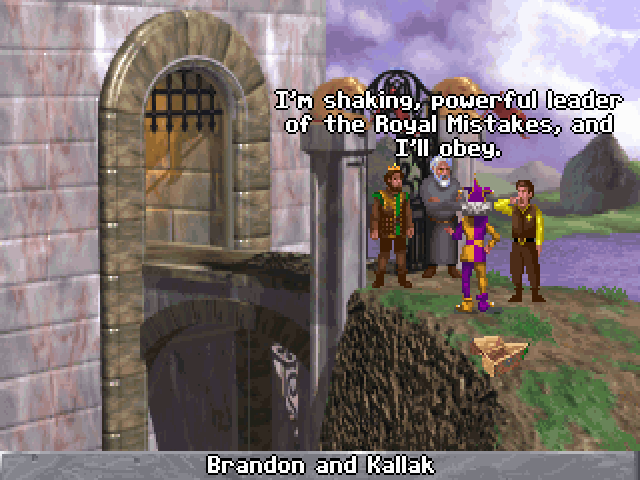 The third Kyrandia game had too many design flaws for anyone to keep count, but a game that lets you take the piss out of that prick Brandon and his stupid grandfather can’t be all bad.

Oh, I love the Kyrandia series! And I think they’re too underrated.

They’re great games. Sure, there is annoying Brandon at first and a firebush cave that makes you wanna pull your hair out sometimes

, but still…
I think the second one is the best of the series, (I like Zanthia and Marco’s “help”, cracks me up!) as for the third I really like that U could listen to Malcom’s version of the story, and the fact that are multiple different ways to get things done (it’s one of the things that I miss in most modern games) and also, the multiple endings. I also enjoyed the Stuart/Gunter ideea, the turn-to-mice was hillariuos, and so was Fluffy. And of course let’s not forget the “Amazing!” Cheese maker!

The only thing that I found a little annoying was the jungle.

And my favorite scene is this:

I replayed the games just a few months ago.

The Kyrandia series is great. I don’t get why it gets so much flak…

I have actually never played the Kyrandia games (for no particular reason). Maybe I’m missing out on something?

When I was a kid I used to love these games - I agree with a post earlier the 2nd is the best in the series. I couldn’t get past a cave in the 1st one, it was very dark and I kept getting snatched by weird creatures. 3 was too zany for my liking - I tried to play it not long ago and it just made no sense whatsoever.