I’ve just started the game, and first we get a moody intro scene, which is then immediately followed by Mustavio giving us the tutorial…

The second he opened his mouth, I was thinking “It’s-a me, Mustavio!”.

And then he explained the basics…

On the other hand, I quite liked the starting puzzle to open the gate, so there’s that…

And I’m loving the graphics (but I remember them being great from diego’s Let’s Play).


Now that the gate is opened, it’s time to explore inside.
Cover me, I’m going in!

For those of you who don’t have a map, download a patch here https://www.4players.de/4players.php/download_start/Downloads/Download/45276.html

Then, you can bring a map with a TAB (I believe, I’m not near my computer now)

Installed. Works perfectly. I already have the map working. There is an icon to use it.

I’m enjoying the logic puzzles scattered around the school, but the place is way too big and the map is way too almost useless.

I remember in Quest For Glory I had to draw a map by hand, otherwise I was constantly getting lost in the forest. It’s a good practice let me tell you.

Has anyone else made a new friend?

Has anyone else made a new friend?

Practically the first thing I did. His name is Zak and he’s a wolf.

Finally got a chance to play. I’ve downloaded the patch, and the map is a nice addition. I’ve forgotten how much there is to explore. I’ve been up to the rafters, and down to the drippy lower levels so far. My companion is not too keen on the view from the studies.

Zak is adorable, I love how he runs in a hurry when I’m on the upper floors outside because he’s afraid of heights. He stands in the corner covering his eyes and when I move he runs like in despair. : )

On another note I was able to get the power working, so I have to stop, however there are still more things to do in this section.
For example:
1) I found a board game…I think it is, but Lydia says I don’t have the necessary piece to play? I don’t know if I should look for it or if this would be getting ahead of the game. Hmmm for now I’m going to stop.

Ok I’m through the first section and have managed to get the machine fixed.

The attempt took a couple of false starts though. After getting into the castle I wandered around and got completely bamboozled by the navigation. After a few minutes I actually stopped playing completely and did something else. I came in again and felt slightly the same, but the third time I had adjusted and was off to explore miles of deserted rooms and corridors. I’m glad I persisted because there is some good stuff in there.

The strength of the game – so far at least – is the puzzles. I enjoyed the fountain puzzle getting in to the castle in the first place. The two main puzzles in getting the machine room fixed I ended up liking quite a lot. Not super hard, but enough of a challenge that when I’d solved them I felt a real sense of achievement and ensured I saved the game immediately so I didn’t lose that progress!

There are a fair few negative things too but I did say I was going to look for the good in this game and not mind smaller distractions, so they can be parked, for now at least.

OK, speculation time. I have been wondering about Zak…

(Going in spoilers although I’ve never played it before so am almost certainly 100% wrong…) So clearly there is more to him than meets the eye, as he knows more about things around the castle then he is letting on and he is the only one who managed to escape… whatever it is that has happened to the others. I did begin to wonder whether he is at least a teacher there, or perhaps even the headmaster/headwizard? in disguise.

In fact, I even went as far as to wonder whether the whole setup with the disappearing people and failed power is just a magical ruse – a sort of initiation ceremony, or maybe entrance exam that new students (or at least this new student) has to pass to get into the school?

Probably not, unless Super Mustavio is playing along too?

The second he opened his mouth, I was thinking “It’s-a me, Mustavio!”.

All I’m saying is, his princess is definitely in another castle!

I’m enjoying the logic puzzles scattered around the school, but the place is way too big and the map is way too almost useless.

I think it was Diego who said he would draw his own map, maybe we should do the same…

I think I am genuinely in awe of anyone who managed to play this without the in game map! Mapping it yourself must be an absolute nightmare. I like to think I have a good head for directions, but after coming up the main stairs, I was pretty disorientated in a few more clicks and that was with the in game map.

I provide more theories that may be totally wrong.

1) The disappearance of everyone is related to the narrator’s voice in the introduction, maybe it was Celeste’s father?, he was saying something like “I spent a long time away from my family”  followed by a picture of Celeste. And one more thing, the introduction if I’m not mistaken ends with the narrator’s voice saying something like “Maybe I’m looking in the wrong place?” Hmmm…

2) Can Zak be Celeste? Helping her, without revealing her real identity for reasons that will be revealed later? This hypothesis crossed my mind several times.

3) What about the gift Lydia gave Celeste. It was lying in the garden. Lydia repeated several times that she doesn’t understand how her friend could have left that gift, she promised her that she was never going to get rid of it.  The explanation could be as simple as something happened at the academy (which is obvious) and people disappeared but not their belongings. But maybe Celeste and the rest of the students and teachers are still there? but in some kind of alternative dimension?

Mustavio’s reaction to Zak made me laugh. Not at the character or the game, just.. joy, I guess?

The experience is so much weirder than I thought it would be. I love that. There’s something genuinely nice about it, too.. or maybe I’ve finally found something to shut down the worrying part of my brain. Either way, vibing to Keepsake.

Now that I’m in my usual mode, I’m digging these theories as well.

Renacimiento,
Finding what you need for the board game will come later.

I have got the power on, the inevitable first step in many a game.

What is well done is that in order to achieve this, you do get to explore everything that is available to you. How I wish there were more hot spots to look at, but that would slow the game down too much. But those book shelves are so inviting, as are the crates and cupboards in the kitchen and basement. There is a lot to see and do…I’ve already got 5 pages of notes.
While I have played this before, I have essentially forgotten it all. I have some idea of what Zak may be, but it is hazy at best.
I am enjoying the puzzles however, it took me a while to realise the I, II, and III referred to the angles. I was trying to make them work as the markers for the lines, and it didn’t make any sense due to the spacing.Once I got the aha moment that they were angles, I was off to the races. 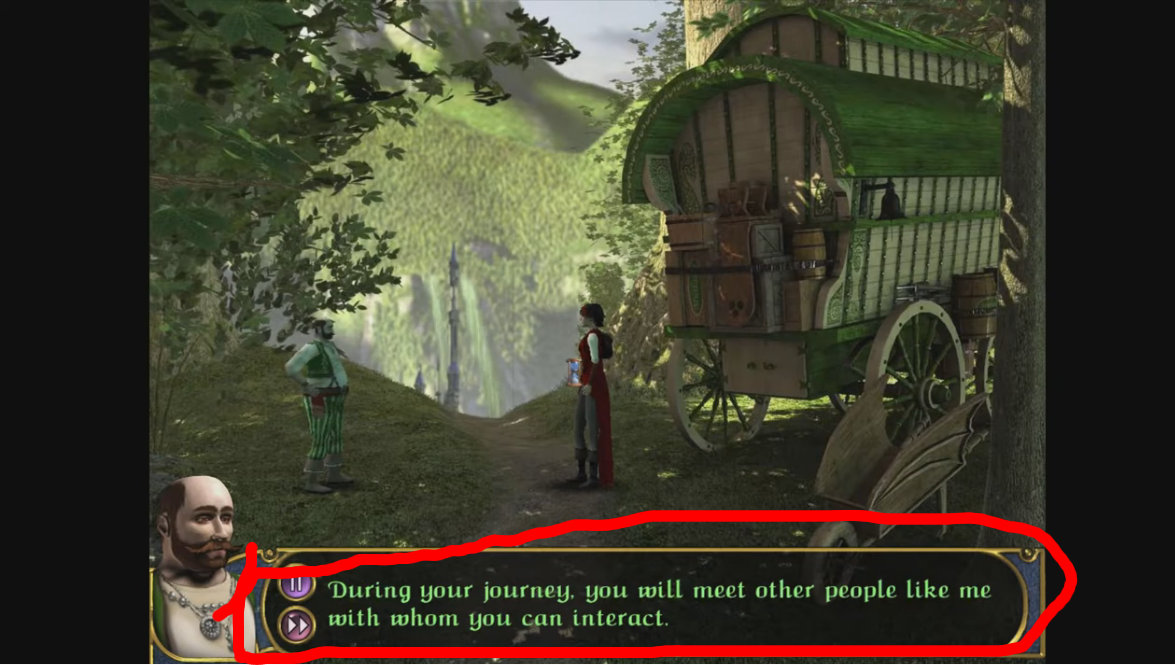 What a blatant lie! The school is empty!

I’ve got the power back on by solving the puzzle by the water wheel, where we’re still standing. I think this also involved setting the panels at a different location correctly, but I got no positive feedback when I set them so I’m not sure.

The size of the area that we’re able to explore already was a bit overwhelming, but I think one can get used to it pretty quickly.

One of the things I’ve noticed when playing Keepsake is it’s sometimes difficult to find the navigation cursor, especially along a walkway with a railing.  Sometimes you have to go back a step to change the camera view before you go forward.

Yes, this has annoyed me quite a few times already.

1) I found a board game…I think it is, but Lydia says I don’t have the necessary piece to play? I don’t know if I should look for it or if this would be getting ahead of the game. Hmmm for now I’m going to stop.

Mustavio wants to sell you pieces for the game, but I don’t think we can buy them from him at this time.

I like that the when the puzzle is not solvable yet, you get that information. I’m not sure I’d want to see that in all games, but in a large scope game like this, I’m welcoming it.