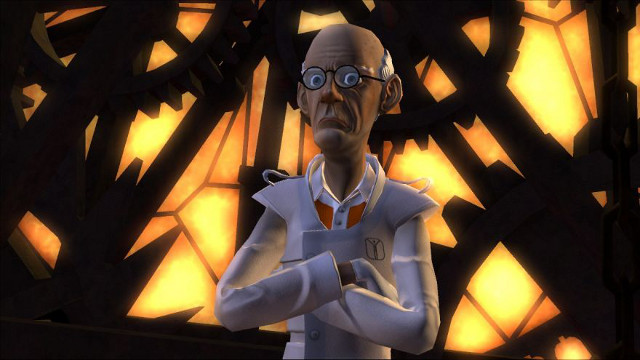 Today in awful fanwank (is there any other kind?): Back to the Future, The Game!

Blegh, I don’t even want to write about this.

Well, since I instantly recognized Doc and the clock tower, Telltale must have at least done SOMETHING right…

My son and I enjoyed playing it, shortly after he had watched the Back to the Future films for the first time. It may not have been the greatest adventure game ever by any stretch of the imagination, but we thought it was fun. I’m not sure I really get some of the more extreme reactions to this.

I played this game and I did not hate it but I definitely did not love it. I’m actually not a big fan of Telltale in general. I still thought that Telltale managed with this game/episodes to capture the vibes from the movies though.

I still thought that Telltale managed with this game/episodes to capture the vibes from the movies though.

Yeah, this was a big part of the enjoyment for my son and I. The gameplay was fine, but the feeling of participating in an extension of the story was the biggest attraction, and I felt that came off pretty well.

I still have the last 2 episodes to finish, and it’s long time since I finished the third, so obviously, I didn’t love it. However, The voice acting is really well done. Christopher Lloyd reprises his role from the movies as Doc and don’t let the fact that Marty isn’t done by Michael J. Fox bring you down, because A.J Locascio, who got the job as Marty, not only does a superb job at acting, but his impression of M.J.F is spot on! Voice acting of this caliber is rare in todays AG’s.

For those who were fans of the movies as youngsters it’s a game worth checking out, it’s a nice addition to the story, but just don’t expect anything profound or challenging. Not the greatest game out there, but not as shite as some ppl would have it either.

I wasn’t a fan of the pacing in the series. There was a lot of walking around, back and forth between places (especially in the episode mentioned in the image above).

I am a huge BTTF fan, so this was slightly upsetting. I still loved the series though, it captured the BTTF atmosphere and the ending had me smiling like a Cheshire cat.

Bitter/sweet, but overall quite good.