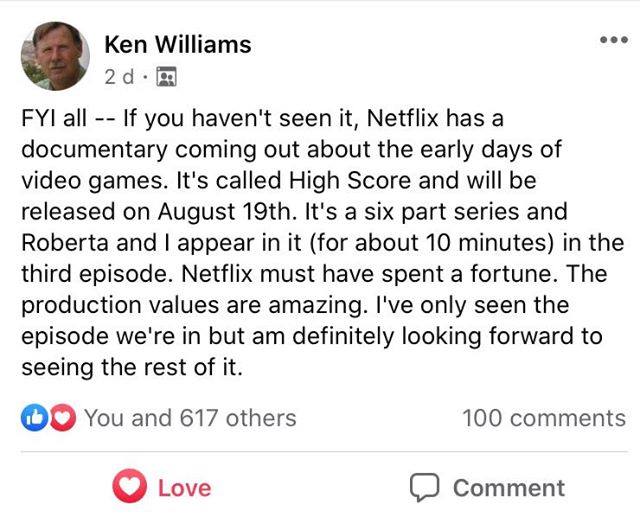 I did see a trailer for this a while back and did wonder if Ken and Roberta were in it, considering how important figures they, and Sierra, were in the early game business. I was going to watch this either way, but nice to know their work is acknowledged as well.

A bit unrelated, but anyone who wants to watch another documentary related to videogames watch King of Kongs: A fistful of quarters. I really liked it when I watched it almost a decade ago, but more recently found that for a lot of people it is top 3 documentary they ever watched. I will give it a new viewing soon.

There is a Netflix documentary out there called High Score. I strongly recommend it. Not all of it relates to adventure gaming, but there’s enough to relate to the entire evolution of gaming. And yes, Ken and Roberta are in it.

There is a Netflix documentary out there called High Score. I strongly recommend it. Not all of it relates to adventure gaming, but there’s enough to relate to the entire evolution of gaming. And yes, Ken and Roberta are in it.

I watched it, I wished they had more pc game history in general. Some adventure game stuff an rpg stuff, and a lot about doom, but that is about it. I have seen 2 mini documentaries about night trap though, both are good and funny.

Ok, i get it, outta 258 mins, the adventure gaming genre gets only 10mins, that like 3-4% of the whole series, that is not unfair, that is just delusional and misconceptional!!, outta the 48-50 years of the gaming industry you have from 1984- 1997 where and when the adventure gaming genre was on the top of the market and the industry, that’s 13 years on top, not just being around as only a pattern or a fabric of the industry which is the state as always; so minimal speaking the genre should have had around 20% of the series attention, that is like 60mins outta 258 mins; which by the series time and percentage, is almost two episodes of the 6/the whole series.

what would you say about that?

The documentary was interesting but I feel that it’s not that well edited and tends to jump around too much without always a great guiding thread. And, yes I agree with you Alvie, adventure games are barely mentioned, pretty much only text adventures and mystery house.

I thought that this documentary was actually better and more fun to follow for people who had lived through it and were playing games in the last 30 years, I don’t think it would be great for anyone else and that’s pretty much a failure on their part.