I will be finishing Act II tonight, but I made an amazing discovery just now when I was replaying Act I to looking for a good wallpaper scene. Amazing to me, that is, it wouldn’t surprise me if everybody else had already noticed that the horse at Equus Oils continues underground. That makes so much sense. 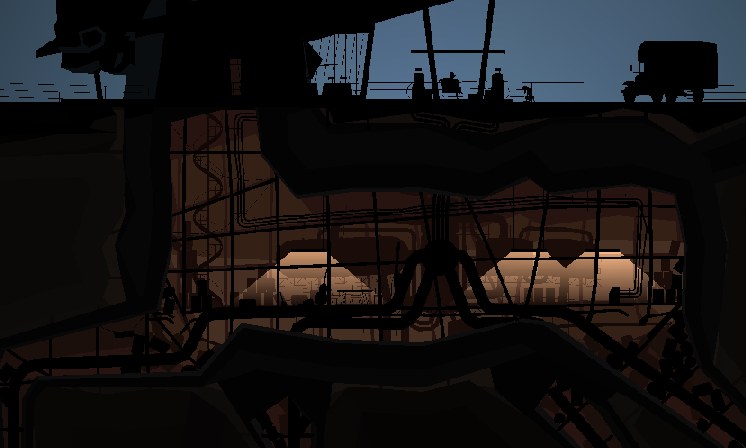 i had not noticed! But it definitely felt like a very strange basement shape… now it makes much more sense.

I just finished Act IV, still a few days behind my schedule.

im not 100% sure but im beginning to think this game has some considerable replay-ability. Like im not sure how much the events so far would change based on decisions, but it seems theres constantly different bits of information and scenes you would see on another play through.

This seems especially true for this act, since there are so many scenes where you have to choose between two options.

On act 4: i thought this was another meaty episode following up on 3.. the chapters just seem to have a life of their own and 4 is no exception… its the river chapter, very distinct and memorable. At the end of 3 a violent storm is brewing in the story, and then 4 is a long eerie calm before the storm. I cant help but question the design decision of “choose to see a scene or skip it.” At first i didnt understand, and i missed the 2nd “scene” because i assumed both options would lead to content…. not “choose content, or nothing.” Furthermore, reading up now, apparently missing that scene cost me the ability to see the last interlude. But im not too worried about it… it doesnt sound like it adds much to the end.

Perhaps I misinterpreted the choices. I assumed staying on the boat would be a separate scene, but never tried that option. If it simply means skipping an interlude scene, then replaying the act is not that important after all.

Amazing to me, that is, it wouldn’t surprise me if everybody else had already noticed that the horse at Equus Oils continues underground. That makes so much sense.

I missed this too and can’t understand how when I see your screenshot.

Perhaps I misinterpreted the choices. I assumed staying on the boat would be a separate scene, but never tried that option. If it simply means skipping an interlude scene, then replaying the act is not that important after all.

yeah i thought the same, but the staying on the boat stuff is just “and then some time passed.” I think that was a weird design choice, i guess to allow impatient people to hurry through the episode. I still think the game has a fair amount of replay-ability with different dialogue choices and the chance to explore again. Maybe not high replay-ability though.

I’ve now finished Act V (and the game). In order to access the final interlude “Death of a Hired Man”, I had to replay the first scene of Act I. Apparently, I’d missed going back to Equus Oils to talk to Carrington.

Regarding Conway: I assume it’s not possible to have him reach his destination. Or did anyone manage to stop him from leaving with the skeletons in Act IV? I quickly clicked one option and first though he would have escaped the dinghy with the other one. There probably wouldn’t have been much of a difference though.

On the end and act 5: I thought this was a really interesting case of sometimes the “right” ending isnt the “best” ending. Act 5 felt right for the story. It did not entertain very much. All the intensity and intrigue that mostly had been built up in act 3, doesnt deliver in act 5. No show down with the strangers. No return to the zero. Its a very pretty atmosphere driven melancholy panorama, full of pensive moments. Its not a thrilling engrossing ending that keeps you glued to the edge of your seat.. You can sense early on what this episode is going to be, and thats what it remains. A sad thought about the end, it seems like conways destination with this delivery is to find peace and “home”.. a space thats off the grid from addiction and the debts of society, and he just never made it there.

I agree about the final act not being very entertaining, as in fun. But is any of the acts really trying to be fun?

Misc questions: One thing i never understood, what is the sound that junebug and johnny make while walking? There was at least one moment in dialogue where its implied theyr robots.. but i dont think it was literal… am i missing something? Also, conways dog… is there any more interaction or resolution with that? I briefly saw an icon over the dog while conway was getting taken away and i didnt get a chance to click it…. And then thats just it… no peep from the dog again. I thought about potential symbolism with the cat/bug being conway/dog, but eh i dunno. Another misc thought, if they ever kickstarted a project to get this whole thing voice acted, i would be right on board. It would be ambitious.. it would be very different from the average voice performance and it would take so much planning from the dev… but it would be sooo cool. So much interesting potential to add flavor to the game. It would also help the characters to feel distinct.. because it was not always easy telling them apart.

I assumed they were literal robots based on the sounds but did not understand the context of it. More voice acting sure could be great!

If any game could qualify as art, KZ0 is as close as it gets. It wouldn’t be out of place being exhibited a museum or gallery. How many games could you say were art? Not many at all.

To me, quite a few games qualify as art. Kentucky Route Zero is perhaps in a league of its own though.