Hey everyone! I wanted to create a new thread for Beautiful Desolation so that I can update it with the latest info, and also answer any questions you may have about the game.

We are in the end tail of development, and while there is still a ton of work to do its an extremely exciting time for the game!

ABOUT THIS GAME
BEAUTIFUL DESOLATION is a 2D isometric adventure game set in the distant future. Explore a post-apocalyptic landscape, solve puzzles, meet new friends and make powerful enemies, mediate conflicts and fight for your life as you unravel the secrets of the world around you.
FEATURING
P&C Puzzles and classic adventure gameplay.
An 80’s retro technology look and feel.
A story-drive adventure set in a dystopian post-apocalyptic future.
A unique tribal punk aesthetic and 2D isometric rendered environments.
African landscapes captured with photogrammetry and scale model elements.
Bizarre creatures, animals and vibrant characters await.

FIND YOUR BROTHER AND GET HOME…

Mark, a man out of time, searches for his lost brother Don, in a far-flung futuristic era ruled by highly advanced technologies which are both revered and reviled.

Your surroundings hold echoes of a desolate past, and glimpses of a dark future that has yet to be written by your actions. Be prepared to face many tough choices that will shape this land long after you complete your journey.

The inhabitants of this world will help and hinder you, as you make new discoveries and navigate the spectacular African-inspired landscape. Negotiate your passage with local leaders, healers and warriors, or find yourself embroiled in a battle against nanite swarms, enormous scorpions and rocket-equipped robots.

The score is masterfully crafted by composer Mick Gordon, known for his work on Wolfenstein®, DOOM®, Prey®, Killer Instinct® and Need for Speed®.

BEAUTIFUL DESOLATION™ is brought to you by THE BROTHERHOOD™, the studio behind STASIS® and CAYNE®.

————
I also wanted to show you some screengrabs I took from the build this morning. We are adding in all of the game logic now (so implementing puzzles, working on characters, etc). 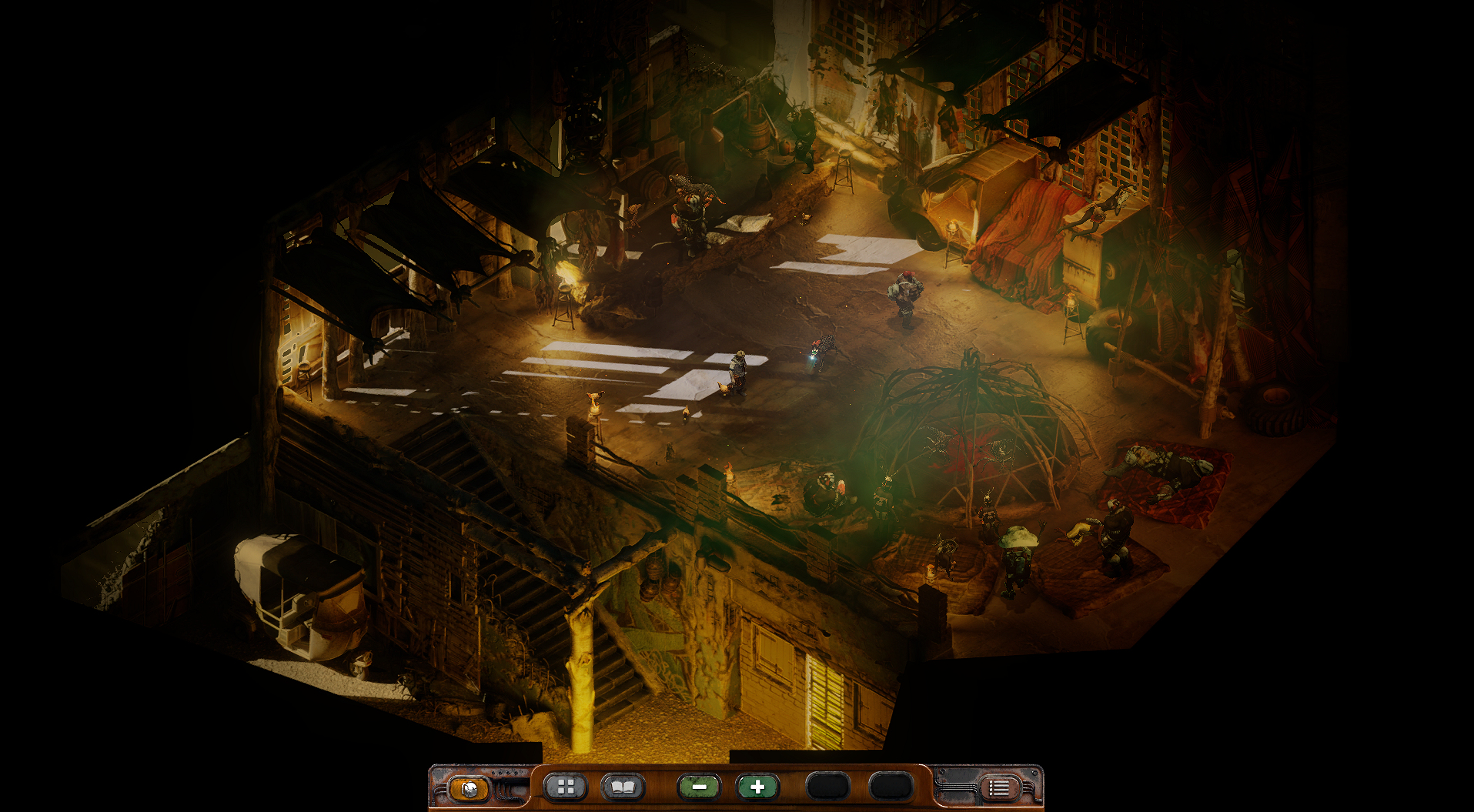 Inside the drug den of the Hanasi. 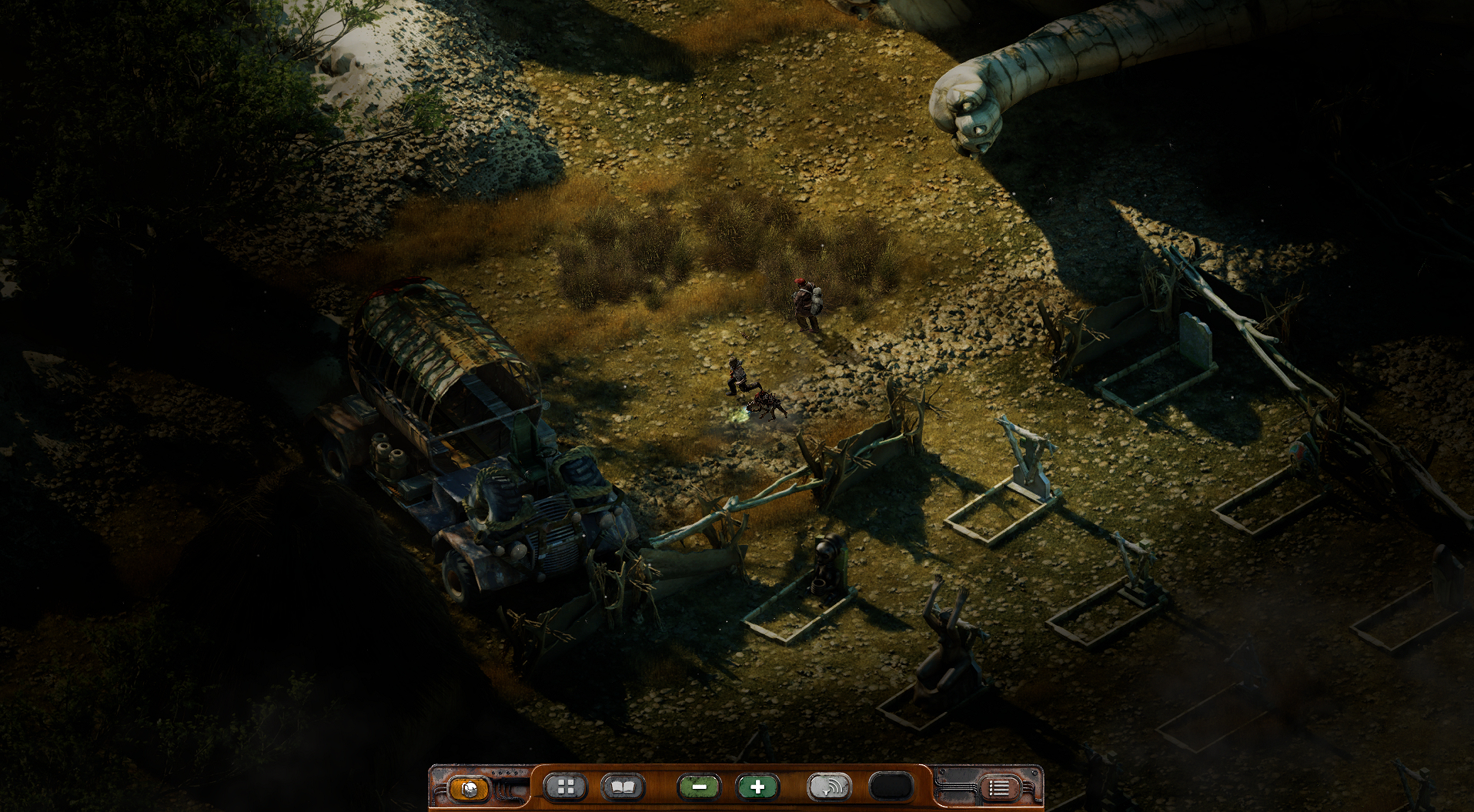 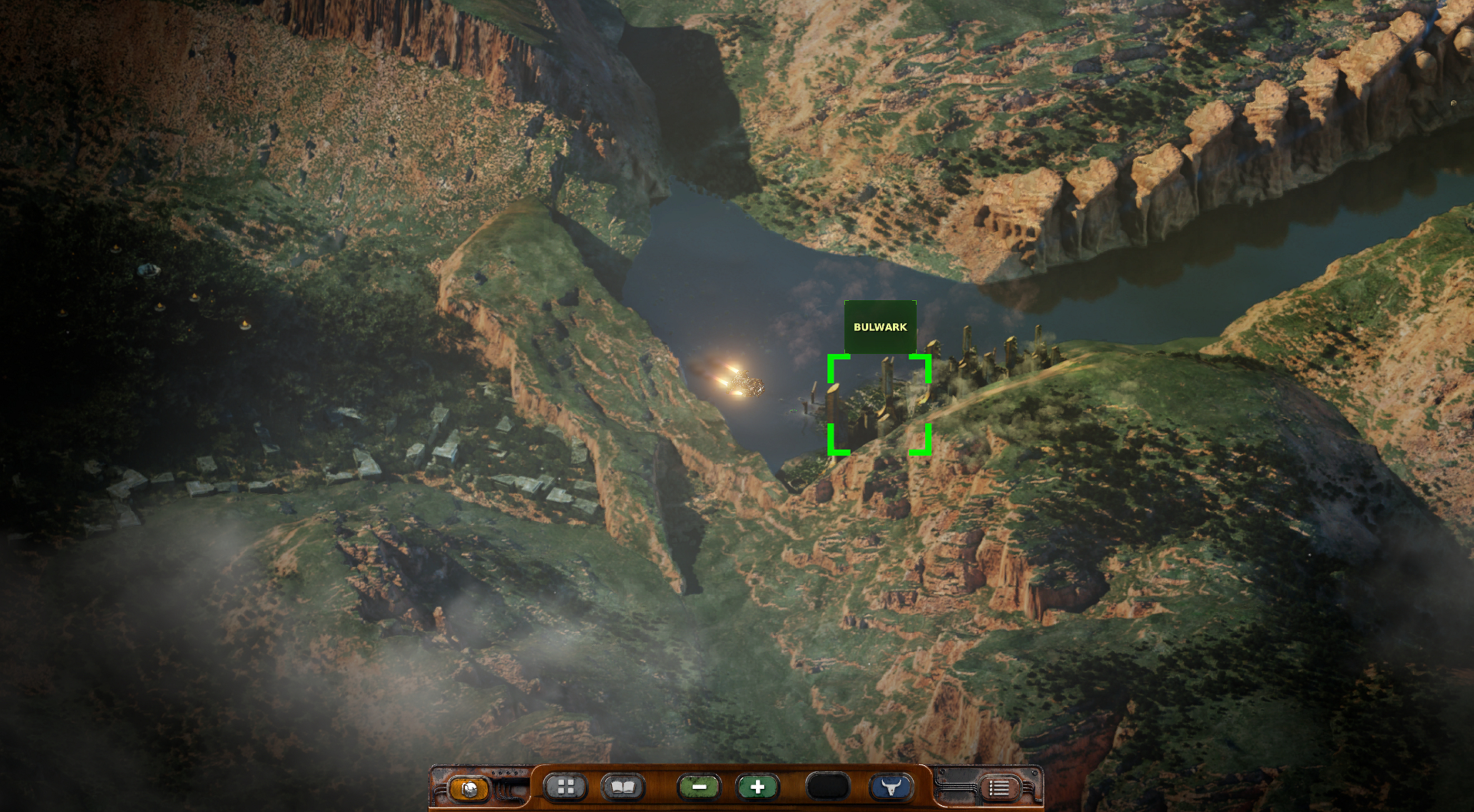 Traversing on of the huge maps in the game. The world is fairly open ended, allowing you to explore places in any order. 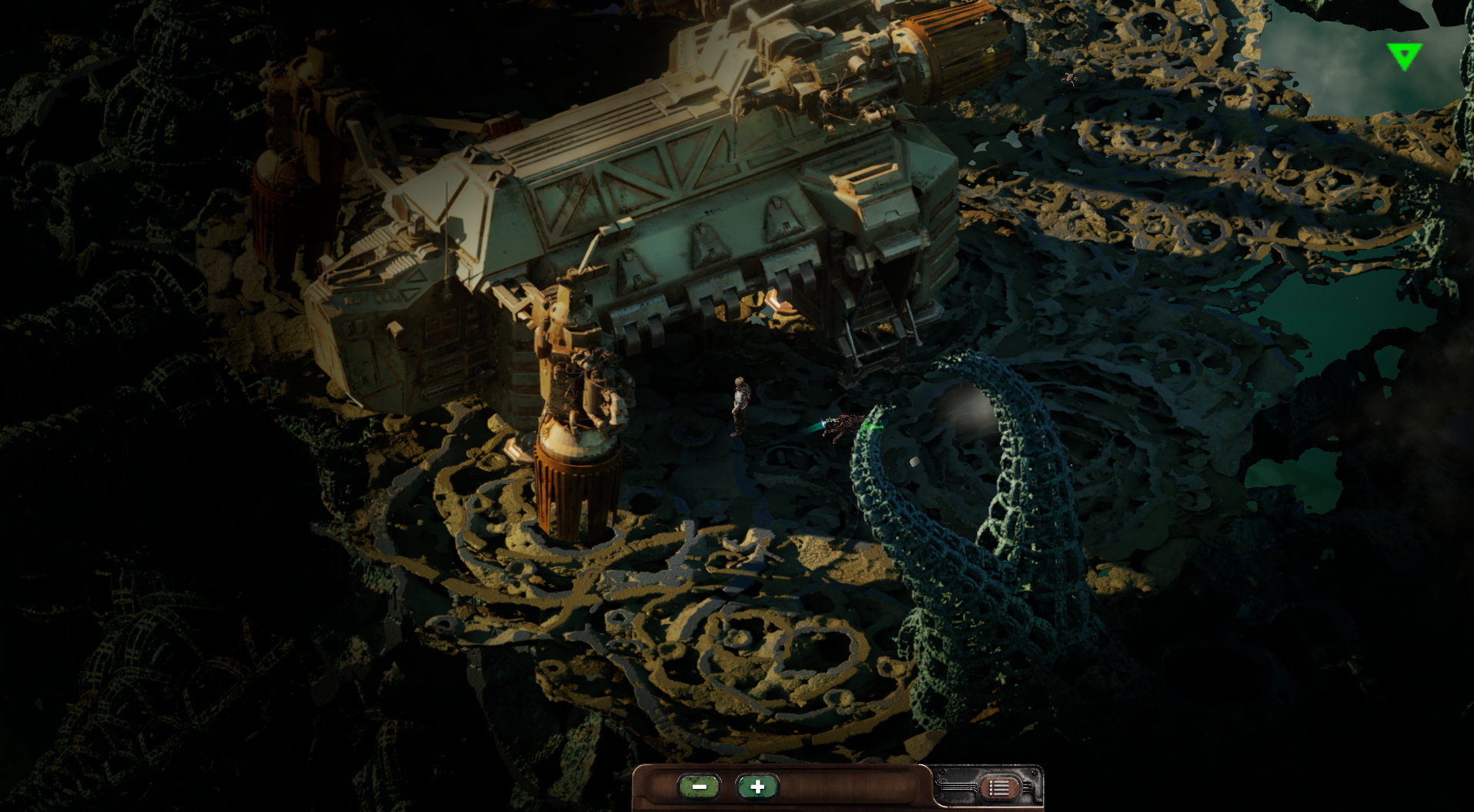 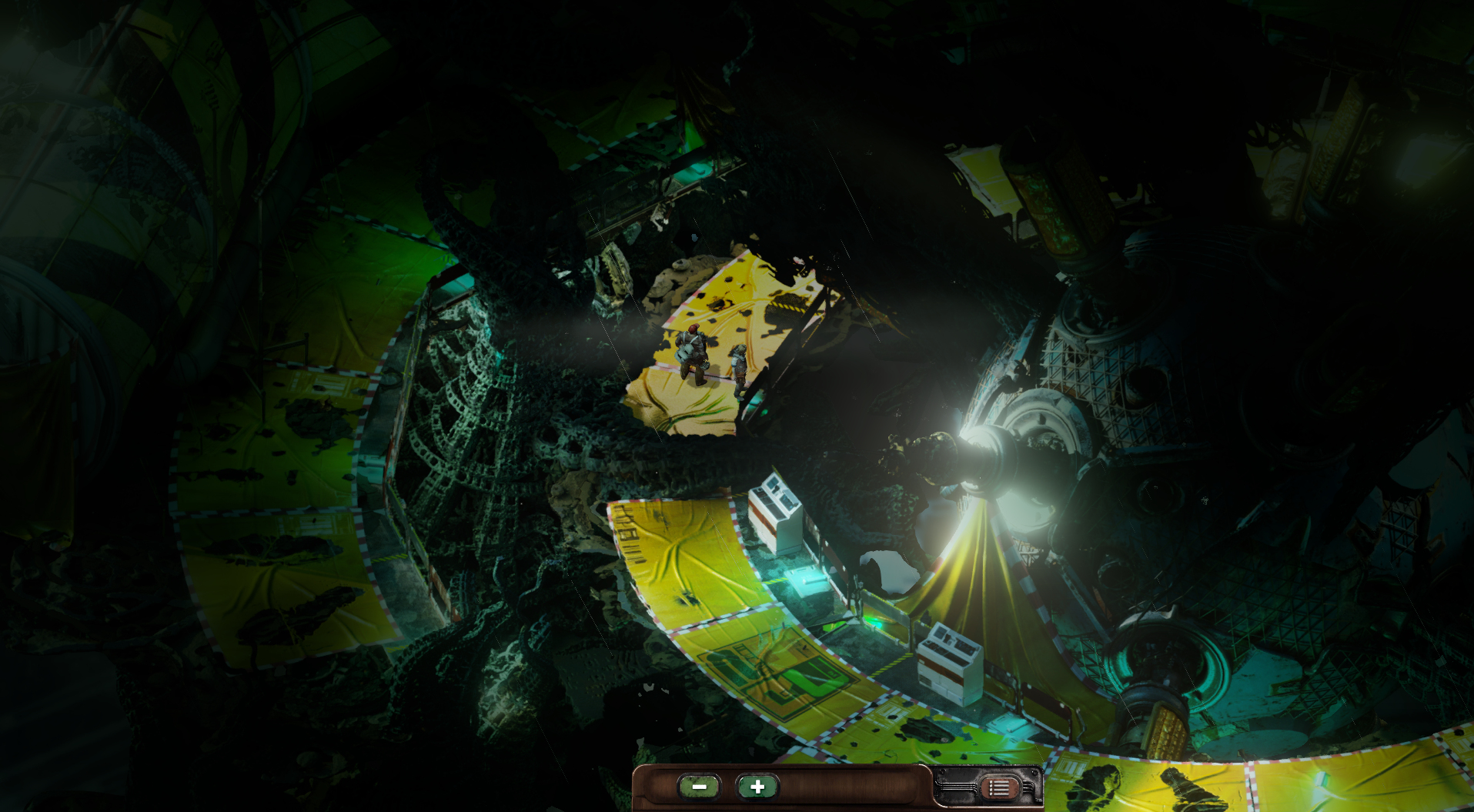 As a backer (who also backed and loved STASIS), I’m eagerly anticipating this.

Artwork looks absolutely stunning, but that’s what drew me to STASIS in the first place, so I was expecting nothing less now.
I have been limiting my exposure to the Kickstarter updates, though. I figure it’d be best to go in relatively blind when it’s out.

You don’t have to for my sake. And you could always use spoiler tags.

I just meant to say that, apart from the Kickstarter updates, I haven’t been actively looking for info on this. That was slightly different with STASIS, where I jumped at the demo, and had already been following the blog for a few years.

With Beautiful Desolation it’s more that I have faith that I’ll get a quality product, so I don’t care as much about the “when” of it. I’m patient - it’ll be done when it’s done and I’ll play it then.

Very similar to TimovieMan here, instantly backed this, the quality is simply gorgous and I look forward to the finished product. No rush here, I believe this will become an extraordinary experience.

Love the new screenshots you’ve posted, I do always welcome those :-)

The new screens are looking absolutely wonderful. Loving the aesthetic, loving the atmosphere. This is definitely one of my most anticipated adventure games.

Definitely one of my most anticipated games of the year! Beautiful is an understatement.

Gorgeous! No.1 anticipated game for me.

They’ve just been adapted to fit the forum width. Opening the screenshots in a new tab will show they’re 1920x1080.
Heck, look for screenshots for this game in Google and you’ll find plenty that are 3840x2160. That’s decidedly NOT pixel art.

Thanks so much everyone!

Donuts - the game backgrounds are rendered out at 8K with the UI at 4K. The max res for the game is currently set at 1920x1080 because of the limitations of using 2D backgrounds - but we are looking at ways to allow people with faster computers to run at 4k (although for gameplay reasons this may be impractical!)

I would love to do a game that renders out at native 4K one day - but its a technical hurdle that we haven’t been able to jump over just yet!

Chris, really looking forward to Beautiful Desolation! I don’t know about desolation, but the beautiful part is right on the money. Can’t wait, keep us posted!

MILESTONE REACHED
We’ve passed a great milestone - we wrapped up the vast majority of the 2D graphics in BEAUTIFUL DESOLATION! This means that all 85+ scenes, the conversational portraits, as well as the menu and item graphics are now complete.

It was an immense undertaking, but Nic and I are pleased to have done so on schedule. Focus can now be applied to the gameplay/puzzle hookup and cinematic implementation.

WHAT IS ON THE MENU TODAY?

We believe that the visual design of the menus should be indicative of the world, and the story themes that we want to invoke. The artistic style and interaction of each menu (and perhaps even the view the player has of them) belongs where it should in our storytelling in an attempt to immerse you in the world of BEAUTIFUL DESOLATION.

DID YOU SEE THE LATEST SCREENSHOTS?
If you follow me on Twitter @stasisgame or our Facebook page https://www.facebook.com/desolationadventure/ you’d have had a peak at a few of our latest screenshots. Let’s just say that BEAUTIFUL DESOLATION will look smashing at 4k / 16:9 or 16:10!

A technocratic religion has sprung up from the ashes of the old world.

A dusty African landscape has some familiar locations…

The ruins of the thriving BAAS civilization are now nothing more than a shell of twisted metal and vines.

Mark approaches the Penrose in the dead of night during a raging storm.

Navigate the world in your trusty (rusty) Buffalo transporter. There are multiple maps to explore and many places to visit.

In case you missed the news, Mick Gordon - the finest video game composer to wield a keyboard and amp - has joined our motley crew. Mick has produced some incredible musical tapestries for the world of DESOLATION and we can’t wait for you to be transported there, audibly and visually.

“Mick Gordon is a composer and sound designer whose compositions aim to transcend the perceptual boundary between music and its context.  Mick’s work considers the role of music as a translation of the world in which it exists rather than a simple accompaniment.  Through creativity, interpretation and collaboration he develops a meaningful exchange between the visual world and music culminating in the authorship of a unified original work of art.”

Here is a small taste of one of his beautifully unique apocalyptic African compositions:

Don’t forget to wishlist and share with a buddy. Our wishlist count will help promote the game on launch

As if on cue: ten minutes after I read the Kickstarter update mail, I see this post.

Congrats on reaching the milestone!

Thanks mate - it was a marathon sprint to the finish. I was only out by a week because I got sick over January - but managed to make it up with a few late nights!