Free full game: Kitrinos, from the creators of ASA and ‘3’ [Black Cube series]

For those who already know the Black Cube series (ASA, Catyph, Myha…) and who appreciate it, I am very happy to present you a collaboration with Yazorius on a short adventure game made as part of the Adventure Jam 2018: Kitrinos. After only one month of development, the game is finished, and offers a kind of prequel to the universe of my previous games. 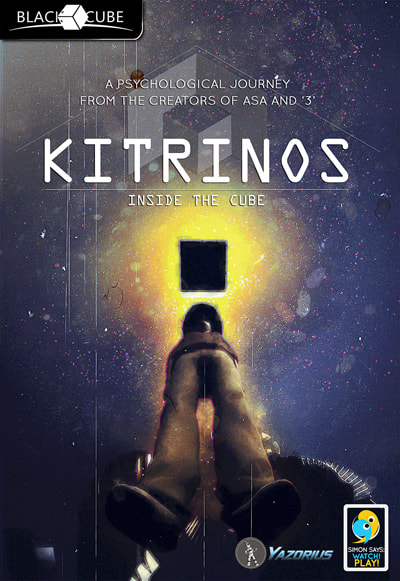 I did all the graphics (environment backgrounds, screenplay and movies) during the two weeks of the Game Jam. It then took Yazorius a month to implement the rest of the game, programming an engine which is -from his own words- highly inspired by Zork (he’s a big fan), and including some puzzles to challenge the adventurers’ neurons. Entirely available in both French and English, this game is above all the fruit of an all new collaboration for us.

With Kitrinos: Inside the Cube, you will have to read, observe, explore, think,... all of it for free by downloading this game directly from the site where the Adventure Jam took place: Gamejolt (note that the game will later be available also on itch.io and IndieDB, still for free).
It is indeed a complete game even if it is short, and not a demo or an unfinished project. Prepare paper and pencil, turn off the lights and come share with us this little moment of immersion in the Cubes!

“1961. The hero is Professor Dimarx, an archaeologist who thinks he made the discovery of the century on his planet, Terra, on the forbidden continent of Meridia. For posterity, he is followed by his long-time partner and friend, Gramuel Solus, who is in charge of filming this great event. On arriving at the ruins, they discover a chasm with stairs carved into the rock. Here and there, strange black crystals seem to indicate ancient volcanic activity. Dimarx is exalted by his discovery, and descends into the depths of the earth without precautions. He is as if called by an unknown force, and will discover the first Black Cube in the modern history of Terra. His mind is then like ‘absorbed’ inside…”

Kitrinos: Inside the Cube takes place in a retro geometrical world that can remind of old scifi movies and polygonal games. The gameplay is frame by frame in prerendered 3D backgrounds with 360° panoramic views in HD and short animation cutscenes. The game was developed with the Clickteam Fusion engine. As usual it is recommended to play with a pen and paper to take notes and solve the puzzles.

For more details (Trailer, OST in streaming and Making Of video), please visit the game homepage on the Black Cube series website:
http://www.theblackcube.fr/kitrinos

Update: Now on Itch.io too:
https://the-icehouse.itch.io/kitrinos

This looks good! Nice and puzzly, just my cup of tea.

How was I not already following you on itch? Fixed now!

Oh yes, on itch.io I’m under the name of our collective ‘The Icehouse’, which can make it confusing :p
https://the-icehouse.itch.io/

This is a wonderful edition to the Black Cube series, if you enjoyed the other games I highly recommend giving this short gem a play! Get your pen and paper ready

Thanks a lot Sir Beardalot for sharing your feedback with us! I’m glad you liked the game so much

The development of Kitrinos has been very intense and we really did our best to include as many interesting things as possible. Of course it cannot be compared with a commercial release, but we are quite proud of the result nevertheless. That’s why it’s important for us to read your opinions and thoughts!

I think that Kitrinos could give birth to more collaborations in the future between Yazorius and me on adventure games projects, when I will be more available, so tell us what you think everyone!
It’s hard to explain how it is so much more refreshing, interesting and motivating for me to work in team with other creators, but there’s a huge difference compared to making ASA on my own. I’m excited by these collaborations with such talented people such as Yaz (Kitrinos), Denis Martin (RealMyha), John Carvajal (Anterran comics) and Juanjo Barcelo (project Blue Moon)... ! I hope you enjoy it too.

Update: Kitrinos is now also on IndieDb if some of you don’t want to use GameJolt or itch.io
https://www.indiedb.com/games/kitrinos-inside-the-cube

It comes with a free DLC, including:
- a digital artbook
- the original soundtrack
- a rearranged album at piano (including partition booklet)