First of all, I want to apologise if this violates any rules - I did read the guidelines, and this post should be ok I believe.

With that out of the way, I am writing to introduce a game that I am working on with some really talented people. I quit my job in the games industry about 1.5 years ago to make a really ambitious adventure game, and we are starting to get some results. 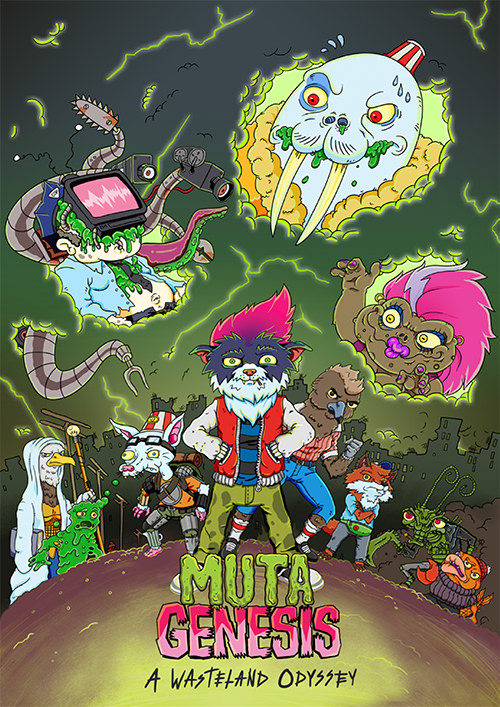 In Mutagenesis, all pharma companies in the world joined forces to become one big, evil corporation. They dumped chemical waste in the water and let their smoke pollute the air. All animals mutated and rebelled against humanity, who in turn nuked the whole world. The animals, whose DNA had already been screwed over by the mutations, survived the radiation. Humanity did not.

It’s here the game starts. As the cat Archie Shipp you have to find your way back to your wife Penny and your son Thelonious who lives in a run down, but pretty nice, house in the new society called Shelter City. You start by prison breaking your way out of the frog Calypso’s den together with the chihuahua Charlie who has had just about enough of being her lapdog, and from there you are running in to increasingly absurd challenges to overcome on your way back.

Back in Shelter City You also get to play as Thelonious in the first three chapters, when you’re trying to figure out what happened to Archie. Archie needs to come back soon, because three mean squatters lead by the walrus Maul Buckling have moved in and are pushing Penny to remarriage, and are trying to take over the home and the leadership of Shelter City.

We are currently developing our Vertical Slice, and trying to find the funding to do the full game. We have previously done a demo, which helped us get the funding for the vertical slice. If you go on youtube, you can find someone play through the demo, but I avoid posting it here, as it feels very outdated and raw to show off compared to what we are working on now.

The reason that I wanted to make an adventure game is that I played them growing up, I loved the LucasArts stuff, but never really felt like the genre translated very well into modern times. Even some of the most popular point’n'clicks today doesn’t live up to what they could be. I think that’s because they need to find that golden ratio between story and puzzle. To me, something like Telltale Games is too much story and not enough gameplay, whereas something like Deponia has a bit too obnoxious design where you have to go around and combine a million things to get further into the story. I know there are other great indies out there like WadJet eye, but I still feel that it’s a genre that has an enormous potential!

We’re doing a puzzle mode and a story mode where the player can choose between a heavily story-focused experience or a more puzzle-focused experience for hardcore players (like most in here probably) that don’t mind being stuck for a while to figure that one annoying puzzle out.

It’s still a bit too early to show off new gameplay footage, but it will look amazing! One of the things that we’ve really dug into is the lighting on 2D art, where we have hand-drawn lightmaps “on top” of the actual art. I think we will achieve something pretty special.

This is the “flat art”

This is a gif showing how dynamic lighting in a 3D setting creates depth in the 2D art.

If you sign up for our newsletter you’ll be invited to closed betas, tests and that kind. We don’t spam!

If you guys are interested I’ll be happy to keep you posted on what’s going on in our development. I’m really looking for a strong community of adventure players to give constructive feedback throughout development!

Follow the development of our Adventure game here and here.

First of all, I’d like to welcome you and thanks for posting such a detailed overview of your game. It looks promising!

Secondly, if you have such strong views about the genre’s potential (which I agree with), why would you want to include a “story mode” and “puzzle mode”? You must have an idea of which direction would be best for your game. I would advise you to take that direction and not cater to anyone else’s tastes.

I really feel quite strongly about this last point, that including a “lite-mode” et cetera is like castrating your game and sacrificing your artistic stance for the sake of the “consumer”. The best version of your game is the one YOU want it to be, not someone else!

I really feel quite strongly about this last point, that including a “lite-mode” et cetera is like castrating your game and sacrificing your artistic stance for the sake of the “consumer”. The best version of your game is the one YOU want it to be, not someone else!

Thank you for the input! Really nice with some passionate views on the genre

I’ll be happy to try to explain where I’m coming from with this decision: To me, the artistic stance, or my overall vision is a lot about the story and the art. Like, how can we create a great story set in this unique art style. I consider point’n'click the medium for this, and the best medium at that. For me, the old games like Monkey Island, Sam & Max, Day of the tentacle etc. were all good in spite of their design, not because of their design. The dialogue, humor and story were really good, while the design too often just felt random. This is a point that has been elaborated over and over, and one I’m sure everyone here already has an opinion on. Mine is that the old games are lacking in everything from GUI design to puzzle design, it feels like something I have to overcome, more than something I actually enjoy.

On one hand I really enjoy hardcore puzzle challenges, on the other, I also have to respect that some players just don’t have the time to be stuck in our game for a week or that some people are completely new to the genre and don’t understand some of the tropes that you have to have played Monkey Island on your Amiga 500 to get. So, to me, having a story mode is not about compromising the vision or dumbing down the game, it’s solely about letting the player choose the kind of experience s/he wants. Both will be true to the vision of the game, which is a lot about telling a story and having many metalayers of intertextuality.

I hope that gives some insight into my thoughts in the topic.

Follow the development of our Adventure game here and here.

This game looks very interesting. I followed you on facebook so that I can see more of what you are doing. I personally like that you have an easy mode and a hard mode. I usually play the easy mode first as I am not that good with puzzles and once I play that way, I will try the harder mode. Good luck with your game!