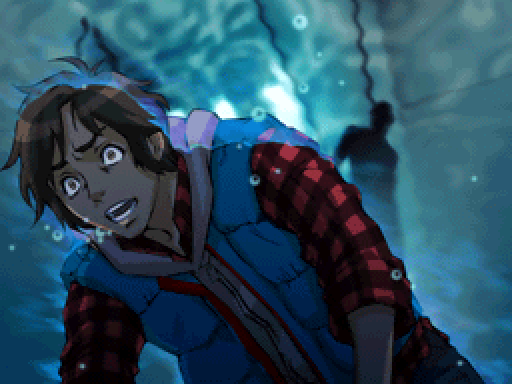 Junpei, look behind you! Oh, too late…

I won’t say that the entire soundtrack to Nick Hours, Nine Persons, Nine Doors made a lasting impression on me, but that theme that played whenever something disturbing, especially related to Zero, was happening has definitely stayed stuck in my mind.

Speaking of 999, has anyone started playing the sequel yet? I’m waiting for Amazon to ship it to me.

Another great game! One that had me so hooked, that I replayed it 6 times to get ALL the endings (including all the bad ones).
Of course, I only got the good ending at replay 6, but still.

Though I liked the music in the game, it didn’t strike me as absolutely exceptional (unlike To the Moon).

Great story, interesting concept, and an awesome mindscrew of an ending.

Like a true visual novel, you’ll be spending a lot more time reading in ‘999: Nine Hours, Nine Persons, Nine Doors’, than you’ll be actually playing. Fortunately, the “Nonary Game” (as it is called in-game) is a very intriguing and engrossing concept, and the writing for it is top notch (and that’s a good thing, because this game really is very text-heavy).
You’re immediately drawn into the story with the first “escape the room” puzzle and despite the fact that you have all the time in the world to solve the puzzles, the game gives you the illusion of danger and urgency. 999 excels at giving the impression that your character’s life really is at stake here, and you get sucked into the game even more because of that.
Once the plot for this game becomes apparent, you’ll have difficulty putting this game down. The premise is a really compelling one, and with the multitude of characters you’ll meet, it’s actually quite difficult to know how the game will unfold (and which of the characters can be trusted and which can’t). To make matters worse, the writer throws quite a few curve balls that leave you guessing all the way to the end of the game. Things are rarely as they seem, and the events in the game are guaranteed to pique your curiosity.
As an extra layer in the story, one of the characters has a history with your character (that’ll be gradually revealed), which leads to some emotional investment as well and makes the impact of the story a lot more poignant…

In general, the game consists out of two parts: there’s the “escape the room” puzzle sequences (there are a total of 16 rooms in the game), and then there’s the “story” parts where you’ll be reading about the events (and where you occasionally get to make a choice). The choices you make in the game determine which rooms you’ll enter (and consequently will have to escape from), and they will also determine which ending you get. There are a total of 6 endings in the game, most of them bad, one of them necessary to “unlock” the true ending, and then of course there’s the true ending - your goal in the game.
It’s definitely worth it to play through ALL the endings (not just the necessary one and the true ending), to get the maximum amount of info about the other characters and about the situation you’re in.

The downside of these multiple endings is the fact that you have to restart the game from scratch after an ending. While the game gives you the option to fast-forward through text that you’ve already read, you will have to replay most of the escape-sequences a few times (the very first one will even need to be replayed on EVERY playthrough). While these “escape the room” puzzles are extremely well-designed and pose a moderately difficult challenge the first time around, they can get tedious if you’re doing the same puzzle for the third or fourth (or more) time.
The other downside to the game is inherent to Japanese visual novels: some plot elements are explained ad nauseum, and some of the characters have a tendency to state the obvious at every turn, so part of the writing may feel redundant as a result. The humour in the game is relatively scarce, and half the time it fails as well (for instance: one character starts singing into a shower head because he believes it’s a microphone, and another character acts surprised as he thought the shower head was “a mushroom growing out of the wall”). I’m not sure if some of these “jokes” were lost in translation or not, but they’re definitely hit-and-miss.
But don’t let these small gripes discourage you, the story in this game IS going somewhere and once you work your way through to the true ending, its mindblowing conclusion will knock you off your feet.

The ending has quite a few twists in it and most of the assumptions you made throughout the game will be proven wrong. The main twist in the game is one that you won’t see coming, and it turns an already great game into something unforgettable…
All in all, this is one of my favourite games for the Nintendo DS…


As this was my second playthrough of the game, I didn’t complete *all* the endings this time around, just the bad “sub” ending, the necessary “safe” ending and the true ending. And I only played the “sub” ending because it allowed me to play every “escape the room” sequence in the game (I would have missed three of them otherwise).

Despite this being a replay for me, and despite skipping two bad ending playthroughs, I still clocked in at 16 hours total.
That means I probably got about 30 hours of gametime out of this the first time around. Not too shabby, imo, even if most of it was reading…

Next up: the sequel!

Zero Escape: Virtue’s Last Reward
The one I bought a 3DS for…

Next up: the sequel!

Zero Escape: Virtue’s Last Reward
The one I bought a 3DS for…

This is my plan… I want Zero Escape so much I am going to get a 3DS for it. The region locking is the only reason I keep putting it off, as I bought most of my DS games off the internet, whatever region they came from.

I loved 999 so much! I love reading, so the games with a lot of reading don’t bother me, though after a few times I was starting to get a bit bored.

The real problem with reality is the lack of background music.

Knightette of the Order of the Caption

This is my plan… I want Zero Escape so much I am going to get a 3DS for it. The region locking is the only reason I keep putting it off, as I bought most of my DS games off the internet, whatever region they came from.

I loved 999 so much! I love reading, so the games with a lot of reading don’t bother me, though after a few times I was starting to get a bit bored.

Zero Escape is the main reason why I wanted a 3DS (the Layton games weren’t anywhere near motivation enough). Now that I have one, I really hope there’ll be localisations for the Ace Attorney games, too.

The region locking (while a despicable thing) isn’t as bad as I thought it’d be. There’s Japan, there’s the entire American continent, and there’s Europe (+UK, Russia & Australia). Since most of my internet purchases are UK-based, I’m not dissatisfied. I’ll have to miss the occasional North-American release, but 999 was really the only game that I had to import for the DS, and the sequel got a European release, so meh…

I’m loving Zero Escape for the moment. There’s even more reading involved than in 999, but most of it is voiced. I’m already speculating as to what’s going on and who’s the real Zero, but I haven’t gotten to a single ending yet, so - if 999 is anything to go by - I really know nothing yet…

Btw, they got rid of the “having to replay entire sections” with a flexible timeline flowchart. Great improvement, imo…