But I’d love to play Device 6, so who knows… one day

Device 6 is one of my favorite games, I really enjoyed playing that one on my iPad.

Has anyone tried out the selection on AntStream? Mugsy’s Revenge, Life Term, and Castle of Terror all look cool, but I’m not sure where the best place to start would be. 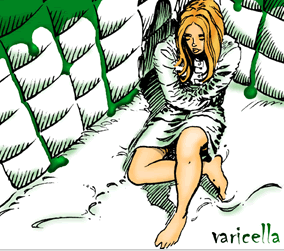 The two recent text adventure CPs motivated me to revive this old thread. The IFDB site has lots of excellent info and reviews, which everyone interested in text adventures should check out. But they don’t have a forum where you can discuss games and ask questions. And rave about your favorites, which is what I’m about to do. 😊

I enjoyed Adam Cadre’s Endless, Nameless so much that I chose his Varicella (1999) as my next text adventure. Downloaded it on a cold and rainy Sunday in December and it grabbed me from the start. Played for six hours straight – something I rarely do nowadays – and finished it two days later. In my top twenty.

It’s a dark game, no supernatural horrors like Slouching Towards Bedlam, but very dark all the same. You are Primo Varicella, Palace Minister at an Italian Palazzo inhabited by people who could pass off as members of the Borgia family. Fortunately I have no objections to playing an unpleasant protagonist (I prefer Deponia’s narcissistic Rufus to Runaway’s boring Brian) because Varicella is a vain, ambitious, scheming, immoral, unscrupulous bastard. The King is dead. Long live the King! The new king is a 5-year old and you’re prepared to do anything to become his regent, hopefully without getting your carefully manicured hands dirty. You have two hours game time = one hundred moves to get rid of your 5 competitors, who are possibly even more evil than you. If you fail, no more Varicella.

One of the things I love about this game is the so-called “resurrection fallacy”. You have to die many times. The more you die, the more you understand. You know nothing at the start, so you explore everything, talk to everybody. The game is one big puzzle divided into subpuzzles and it was great fun to figure out the correct order to solve them. After many hours you know exactly how to use the hundred moves. Hardly any leeway. I love that type of game structure. It’s no coincidence that two of my alltime favorite text adventures, TimeQuest (Bob Bates) and Make It Good (Jon Ingold) are also one big puzzle.

The excellent writing is another reason this game has entered my top twenty.
>x me
You are the very model of a modern Palace Minister. Fingernails: spectacular. Moustaches: flawless. Hairline: receding more slowly than last month. You’re certain of it.
>i
You are wearing a shirt of the finest imported Chinese silk, a doublet of a subtle purple hue, an old-style jerkin with a pleasingly high collar, a fittingly understated pair of black hose, a fashionable pair of paned knee-breeches, a black cloak edged with a splendid silver brocade, a pair of stylish custom-made shoes and a hat that is all the rage in Paris this season.
>look
You’ve funneled the lion’s share of the palace improvements budget—and most likely the tiger’s share as well—into renovating the salon… not that the Philistines you live among are equipped to appreciate it. From the plush Quattordici chairs to the handsome volumes in the library to the imported Ming tea service to the steward you hired to attend to your grooming needs, this is an oasis of taste and comfort in what is otherwise a fairly uncomfortable and tasteless building. Ah, well. When you become Regent you’ll have greater latitude to redecorate.

And there’s a third reason. I’ll be as vague as possible but I’ll put it in spoiler tags anyway. The ending felt like a punch in the stomach and that’s as it should be in such a dark game. The author not only has the right but also the duty to deliver a punch.

PS: If anybody knows of other games with the same “big puzzle” structure, please post!

Varicella goes straight to the top of the list. I was reminded of a novel I read years ago, “The Scarlet City” (“De Scharlaken Stad”), by Hella S. Haasse, though this sounds like it has a lot more cynical comedy. I really like the quotes you shared, so I’m looking forward to this!

At this moment I’m still chasing a pig. Which is actually a weird tradition in the region where I’m from (unfortunately). They don’t call it “the behind-corner” for nothing.

I wonder though, would you recommend I play “Endless, Nameless” first?

Varicella goes straight to the top of the list. I was reminded of a novel I read years ago, “The Scarlet City” (“De Scharlaken Stad”), by Hella S. Haasse, though this sounds like it has a lot more cynical comedy. I really like the quotes you shared, so I’m looking forward to this!

Haven’t read it. Her historical novels are very good, but I don’t know anyone who still reads Hella Haasse, she’s a writer from the past.

At this moment I’m still chasing a pig. Which is actually a weird tradition in the region where I’m from (unfortunately). They don’t call it “the behind-corner” for nothing.

I wonder though, would you recommend I play “Endless, Nameless” first?

Oh no! Definitely not. Endless, Namelees is a “meta” game about text adventures.

Haha yes! Now you have another one. I hope.

Thanks for the heads up on “Endless, Nameless”. I will give it a try in the future.

Haha yes! Now you have another one. I hope.

Looking forward to playing the new Rusty Lake game with you! I wish they would announce a release date.

Thanks for the heads up on “Endless, Nameless”. I will give it a try in the future.

When I’ve finished The Wizard Sniffer I’ll give IF a break. Usually I only play one or two text adventures a year.

I think I’m near the end of “Lost Pig”. I have an idea that isn’t working yet, based on a certain training technique, usually geared towards dogs.. Either I’m overthinking it, or I’m not doing it right. I know the way out and I have a dependable source of light.

I really enjoyed my conversations with the gnome. I shared a couple of quotes my with my D&D group - his description of adventurers seemed quite familiar.

edit: Grunk and I made it back to the farm, with the pig and 7 points for good behaviour! The final point was an undo, redo and eyebrow-raising exercise. On the whole, “Lost Pig” was a fun experience and welcome change of pace.