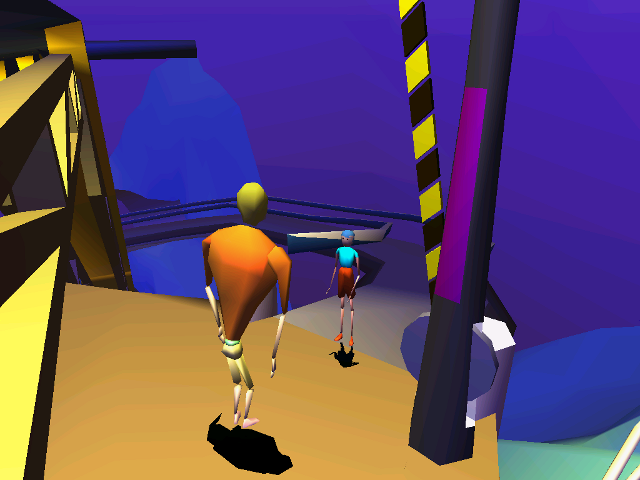 In keeping with the tradition of Wednesday = Fien Day, today we have Isabelle, a French game from the late 90s. I was going to post a scene from that game a few weeks ago, but then I decided to play (at least some of) it first. That was an interesting idea, since it prompted me to write one of the most epic rants I’ve written in a long, long time. Like all rants, it’s probably a bit unfair, and it’s as much about me as about the game, but there you go:

I’ll preface this be noting that, in the grand scheme of things, Isabelle is nothing exceptional. It just adheres very strictly to the two tenets of pretentious artsy bullshit:

1. I am different therefore I am.
2. If it is in any way enjoyable, then it cannot be Art.

Isabelle takes place in a weird village which is being taken over by a bad guy named More and his gang of thugs. You play as George, who became blind after being crushed by a boulder pushed by More’s thugs (that makes a lot of medical sense…), and his little brother Raymond. The story is narrated (with voice-overs) by George and his girlfriend, the titular Isabelle. Those two have some of the worst writing and voice acting I’ve ever encountered in my life, made even more insufferable by their constant bickering. You have to sit through it, though, since all the other dialogue in the game is done with some really obnoxious gibberish and so you need those two to tell you what the fuck is going on. Listening to them and to the gibberish may be bad, but the assault on your ears is nothing compared to that on your eyes. Graphics are made of ugly early-3D models and, when playing as Raymond (since George is blind, everything is blue and brown when playing as him) everything is full of ugly, gaudy colours that make you want to claw you eyes out. Doubtlessly these ugly colours are there for a reason and give insights on the psychology of the characters and blah blah blah (sorry, I fell asleep typing that bullshit). And also, you know… trying to make your game look pretty would just be crass commercialism, wouldn’t it?

The story is a very unsubtle metaphor for the rise despotism, and the people who let it happen because it’s convenient and they want order and stability, and the other people who have the courage to resist. If that sounds like a high school art project cliché, that’s because it is. It’s a well established fact that if you have absolutely nothing to say but want to sound clever anyway, throwing in a study of totalitarianism is totally the card to play. Or possibly incest if you want to go for a more “personal” and “tortured” tone. (Maybe there’s some of that too in the game; I didn’t play long enough to find out.)

Believe me, I tried to give this game a chance. After the ugly intro with that awful voice acting, I was thrown into some blue location with no idea what to do, but I soldiered on. The controls were terrible, but I managed to move around, despite falling repeatedly (because George is blind and the game feels it would be remiss if it were not at least half as painful as being really blind). I got to play as Raymond and my retinas got burnt by those ugly, gaudy colours, but I kept playing. At one point, the game started playing some awful MIDI music, and that froze the game; I disabled the music, restarted the game, and didn’t give up. But after what felt like an eternity of running in circles, listening to the two stupid narrator reading their awful bickering lines, getting slapped in the face repeatedly by weird nurses (I kid you not) and having generally no idea why the fuck I was torturing myself with this game, I decided to call it quits.

In a way, Isabelle is a masterpiece. It seems so utterly awful that it guilts the players into thinking that, if they don’t like it, it must be because they’re too stupid to get it—all the snobs end up convincing themselves that they love it. And with its “too experimental for the unwashed masses” vibe, it was perfectly calibrated to rake in a lot of public money. You can be sure that, despite selling something like 15 copies, it must have managed to turn a profit thanks to the public funding it got. (The credits mention that it was EU money. Somehow, the thought that the Brits had to pay money to the EU to fund that POS makes me very, very happy.)

With its thick coating of pretentiousness and elitism, Isabelle is so French it’s not even funny. As a Frenchman living in California, I can sometimes feel very homesick. At least now I know that, whenever that happens, I can just fire up Isabelle and instantly feel good about being halfway across the world from the sad, pathetic country that gave birth to that game.

Never heard of the game, but that was an entertaining read.

And I live close to the French border, so France is a good subject for jokes here too…

I know only one other person in the adventure game scene who likes Isabelle:  Steve Ramsey reviewed it at quandary (now metzomagic.com). Isabelle is an interesting and somewhat frustrating experiment. I felt moved by the emotions expressed in the game but hated the terrible navigation.