Pretty underwhelming E3 so far, in my opinion. Sure some of the games shown at the press conferences can turn out to be amazing, but so far we’ve mostly only seen glimpses of what they will be, so to call them amazing would be just guessing.

And most of the games that had a more thorough presentation looked pretty generic to me. So far only Assassin’s Creed III came close to impress me (it has some impressive elements).

EDIT: Because of my use of the word ‘amazing’ my post perhaps sounds like a reply to Monolith’s posts, but it’s not

I’ve seen Trep appear from time-to-time on the site. If you’re reading, it’d be like old times if you posted your thoughts on e3!

Kojima and Inaba praises Last of Us

Said Kojima: “‘The Last of Us’ was, of course, amazing. The first time I’ve wanted to play a game in a while.” In a subsequent Tweet, he added “As a creator, The Last of Us demo crossed beyond envy and brought me delight. It brought out the desire to create again. Thank you.”

Wrote Inaba: “I have no idea how it’s being controlled, but this expression for something interactive is absolutely amazing! Naughty Dog is too amazing!”

Of the games that actually showed something here are my opinions.

- Dishonored looks interesting, reminds me a lot of Vampire: The Masquerade - Bloodlines (which I’m about to install all over again).

- Hitman: Absolution looked rather good in that ridiculously bad designed chinatown level; lack of Diana really punched me in the ear when the start of the level briefing was heard…

- Splinter Cell: Blacklist has some of the most fluid animations… but that is the only good thing I see in it.

- New Tomb Raider looks like an awesome movie. I would love to go and see that in the cinema.

- Most of the stuff that wasn’t for PC I ignored…

Well, sorry for my lack of enthusiasm!

These pics ,THE DETAIL 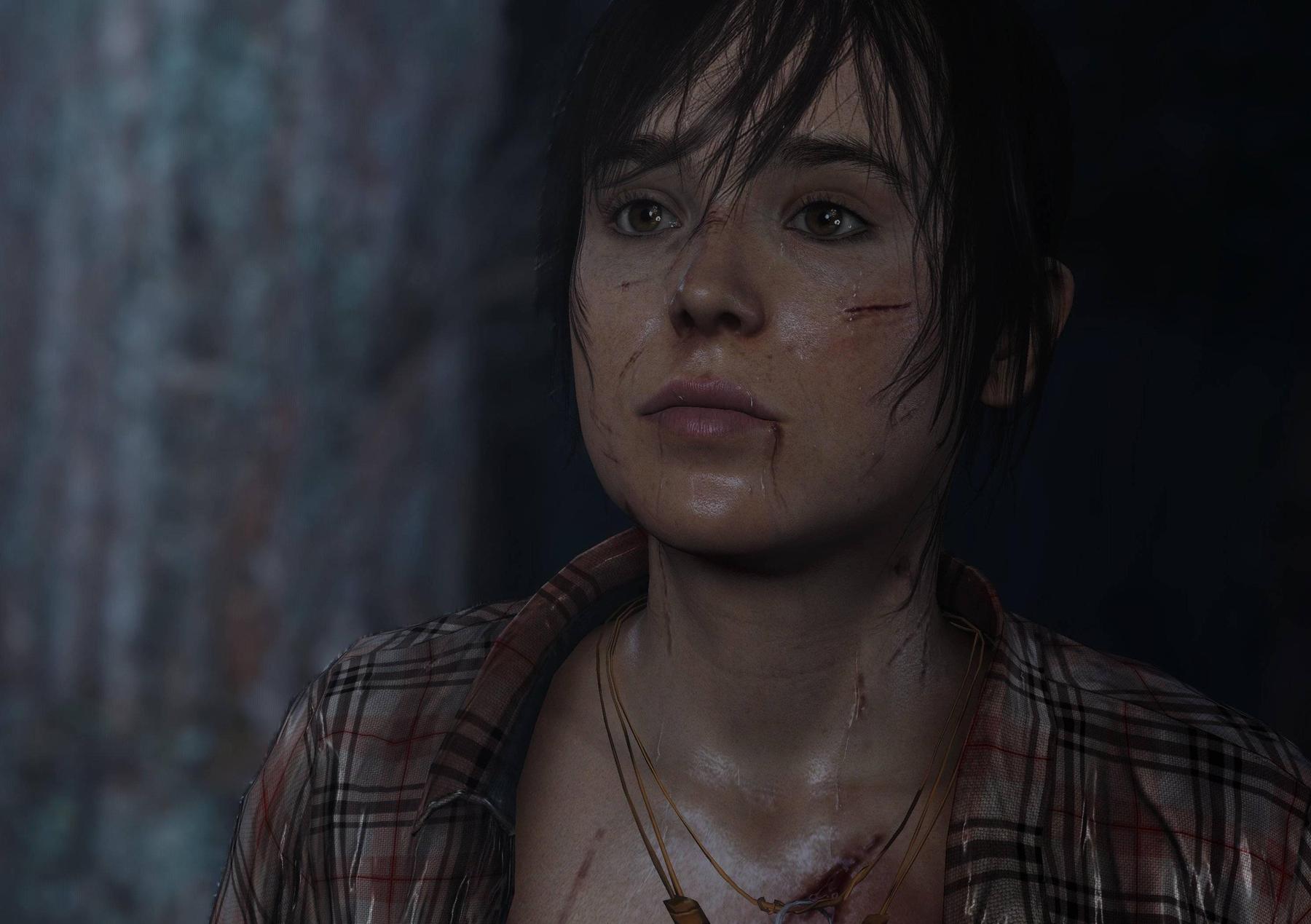 CDP has now time to beef up their engine to outclass what was shown like
Beyond, SW1313, WatchDogs and LastofUs, and give us full blown cyberpunk world
with their awesome polish expertise.

This E3 proves that mainstream gaming has hit rock bottom, there’s hardly anything to be excited about anymore. Apart from the new Tomb Raider, SimCity 5 and Dishonored there really aren’t that many games I’m looking forward to.

Indie projects and those from smaller studios is where the fun factor is at for me. Legend of Grimrock alone beats all multi-million “AAA” titles released so far when it comes to pure joy stemming from its lovingly crafted design.

Beyond looks hardly impressive if you look at, say, Crysis from 2007:

Besides, it’ll almost certainly be yet another QTE-ridden, poorly written tech demo like Heavy Rain. Not excited about it at all.

Lets get excited for some new adventure games with only subtle changes to gameplay. *rolls eyes*

Oh mannnn the nintendo conference, what a laugh, soo bad even gutter tier would be an understatement. Hour wasted.

Beyond looks hardly impressive if you look at, say, Crysis from 2007:

The Nintendo conference just finished. I was completely under whelmed. Usually Nintendo kills at E3 by dangling your childhood in front of your face but instead they talked about ports of games everyone has played already and a new Pikmin. Quite disastrous IMO.

Ubisoft won E3. They were the star and featured heavily in every conference. I’m very happy with this considering they’ve been releasing really underrated games like Rayman Origins and Driver San Francisco that deserve more attention.

Sony was also good with their selection of games with Ellen Page or Ellen Page-esque characters in them.

Microsoft was adequate. Saved by Trey Parker and Matt Stone.

Well the Nintendo presentaion of their new console sucked ass.

Started off with Pikmin 3 which looked cool, the controller screen had the map etc on it and the gameplay looked very Pikmin. This could be fun.

Announced that the hardware will support 2 gamepads instead of one that was previously announced.

New Super Mario U (this is going to be the new thing where all the games are going to be **** U) was a 2D experience that harked back to the old NES games. Where was the successor to Mario Galaxy.

Showed some 3rd party games like Batman Arkham City etc, but most people have already played those games and the gimmicky controller screen add ons are not goin gto make me buy them again.

Scribblenauts Unlimited looks cool though. I can see it fitting into the new control scheme.

Then did a lot of causal stuff.. Sing (Karaoke game), Wii Fit U (adds in a seperate controller for whne you are out running, uses the old balance board and uses the new controller in the exercises)

Did some decent 3DS games . New Super Mario 2, Papermario and a Luigi’s Mansion all for 3DS.

No proce, no release date and a lack of decent looking games means I think i’ll pass on the Wii U.

After seeing the Microsoft, Sony and Nintendo press conferences, I think it’s safe to say that the winner was definitely not us players. Nintendo sold me on the Wii U as a system but it’s already clear we’re once again going to be having a problem with the software. Microsoft had absolutely nothing new to show us, just the usual sequels we see every holiday season. Sony at least had Beyond and The Last of Us, some of the very few new IPs, but those are a long way off and in the immediate future there’s absolutely nothing coming. Do they even have any exclusive first-party titles coming this year aside from maybe LittleBigPlanet Karting?

Bleh. The only genuine surprise that came out this year was Watch Dogs, which came out of nowhere and looked great. Everything else was business as usual.

Oh you didn’t get the sarcasm, if you have audacity to call a commercial and critical hit which won many awards (for technology and other categories), a QTE and poorly written tech demo(which can qualify as trolling for me too), then i can voice my own opinion too about Crysis 2 ,yeah Crysis2, the pic is there for Crysis1 because i quoted you. Frankly for me Crysis series in general is one of the most generic FPS series out there, there is way to handle faces not just raw detail or poly numbers and Crysis series fail hard to nail it and SH3 Douglas model is way better than most present gen models. Even Yakuza on PS3 looks better than most UE3 models , its a matter of taste and observation. So please stick to E3 related games , don’t compare and start arguments that are offtopic. I commented on my personal opinion on Beyond graphics you dont have to
compare it and calling it QTE, that is years old argument, nothing new.

Do they even have any exclusive first-party titles coming this year aside from maybe LittleBigPlanet Karting?

I loved Pikmin 3, I’ve got to say. Just finished watching the playthrough now.

There’s been plenty to get out of this years E3 on an individual basis.

I severely enjoyed Dishonored. That game stole the stole for me. Great presentation, plus the mechanics were very cool.

The only downside of the show for me was the fact that I couldn’t get in to see the XCOM presentation. Fuckers, i’m Media. lol Everyone else treated me with respect. /rant

The highlight of the day though was hanging out with the crew from ‘the Guild’. I have a crush on Felicia Day. Seriously, I hope she hits me up later. lol Oh and Sandeep Parikh. haha