This is probably a stupid question, but is there any place to buy a digital download of Dragon Age 2? I checked my usual sources and they’ve failed me - it’s not on Steam, etc.

EA sells it from their own store/client, called Origin, here. If you’re new to Origin you may want to glance at the FAQ to learn what it is—it’s basically EA’s own version of Steam.

You can also buy DA2 from Amazon, but it still just gets you a code for Origin, so that’s probably only helpful whenever Amazon has a sale price that Origin does not simultaneously have. (It sometimes happens that Amazon sells Steam game codes cheaper than Steam itself may be selling at the time, so I assume but haven’t confirmed that it happens occasionally for Origin games too.)

Thanks, that was exactly what I needed.

I tried doing a search for it myself, but Origin was too close to Origins, so I thought it was the wrong game.

Most of the other sites that came up in my search seemed sketchy.

I appreciate your help!

isthereanydeal.com is a great site for tracking deals on downloadable games. As a bonus it shows a nice selection of webshops.

As an example, this image shows the current state of DA2: 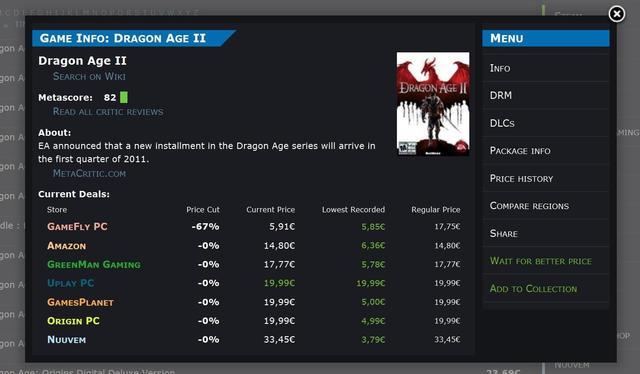 EDIT: This image shows the region “EU1” - the deals and webshops can obviously be quite different for other regions.