Jump Mania - classic Q*bert with a taste of adventure!

I did not see a post here about this, so I decided to make one!
Remember Q*bert - the hopping guy, changing cubes colors and his enemies! Classic, right?
Well, it comes up for mobile devices!

It is not live yet, but they say it is coming up

P.S. I do not know how many of you are interested in mobile games, I see here PC, MAC..and…iPhone & iPad, so decided to share here! I really think this will be a great comeback for Q*bert

Have a great day all!

Speak for yourself - I love the retro look of classic Q*Bert more than that vector art smart phone app crap.

Also, you made that game right? Well good luck to you if you did - it took the Rovio guys about 40 or so games before they hit it big with Angry Birds, hope you keep going with this and please visit again when you make an actual adventure game!

Well, I think you should try it when it goes live and then come up with a conclusion

And also, Angry Birds is not the only hit breaker on AppStore - there are different games for every one, I prefer Plants vs. Zombies than Angry Birds. Just a matter of opinion

I just saw the video and screenshots from the link. It looks pretty good to be honest.
The redesign is colorful and will appeal to young children. The classic retro look is more for the old school guys I think.

Q*Bert is a short round guy with a trumpet nose.

Who is the lame dog looking character?

What’s with you guys and new stuff? I thought this will be cool news for every one who used to spend hours and hours playing Q*bert. Times move on, things are changing, this is a remake - of course it will look different! I tried and I did not find anything like this on Apple store or Google Play - so, for now, that is it

When it is live, just try it and if you like it - ok, if not - you can always give a feedback

Q*Bert is a short round guy with a trumpet nose.

Who is the lame dog looking character?

I was thinking the same thing when I saw that screenshot. That’s not the Q*Bert I remember, nor is it anything like the one that featured in Wreck-It-Ralph (which was very close to the original one)...

Lots of luck with the project, but why the main character overhaul???

Times move on, things are changing, this is a remake - of course it will look different!

Yeah, but everybody who has ever heard of Q*Bert knows it’s a round character with a trumpet nose.

It will look different in a remake, I get that, but looking different shouldn’t mean getting rid of the roundness and of the trumpet nose, and adding ears. Just take the original form and make it newer. Closer to something like this: 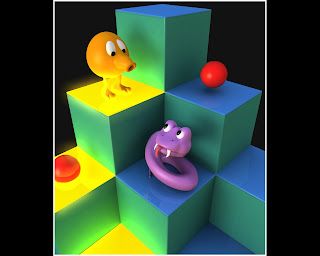 Wow, I have never seen this 3D version….I guess you may be right. We will see how it goes and will consider your opinion. Thanks for the hints

Wow, I have never seen this 3D version….

I just Googled “Q*Bert” and this was one of the first images to appear. It leads to a rather interesting interview with Warren Davis and there’s a ton of Q*Bert merchandize depicted in it. Which kinda enhances my point about changing the look of the main character too much…

Thanks! I will have a look at this

For now we will see how it goes, but this is very useful information! Thank you again!

Well, guys! Here is the moment of truth! Jump Mania is live!

Come check it out and leave your feedback

Hi, guys! We from Zariba are very excited to announce our latest project is LIVE on AppStore!!!

If you love old school arcade game, we think, you will be very very happy!

:D It’s fun, it’s unique, it’s FREE! The reason we did this is because we are great Q*bert fans as well and there was no such game is AppStore! Until now!

We will be very glad, if you try it leave a response: Did you like it? Was it difficult for you? What you recommend! This matters!