Recently, I started playing horror games all the time. I just love being scared! So I decided to make a thread about it. Recommend some good horror games (or warn us of them). It can be adventure games, FPS’s, survival horror games, or any horror themed game you recently played.

I’ll start with Call of Cthulhu: Dark Corners of the Earth. Call of Cthulhu: DCOTE is one hell of a game. It doesn’t only have a great Lovecraftian story, but also some atmospheric gameplay like no other. I also feel that Amnesia owes A LOT to this game. It’s one of the first (to my knowledge) games with a sanity system, in which the if the player character sees a lot of blood, gore or unnatural creatures, he will start getting hallucinations, start hearing noises, and eventually kill himself. Also, the game has no HUD at all. There’s no cross-hair to aim with, and the player has to count the bullets himself. The first half of the game is pure adventure gaming, very similar to Amnesia, with running from enemies unarmed, investigating, solving puzzles and sneaking. Unfortunately, the game turn into a FPS in the other half. It’s still a great FPS, but it’s not the same. I recommend it to everyone. Plus, the picture up there is of you fighting the Dagon.

Corpse Party? I’m definitely gonna play it when it comes to PC. And I hear it’s coming soon. I just love those RPG Maker horror games. Actually, the last horror game I finished was Yume Nikki. 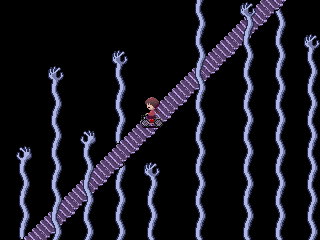 WOW. It’s definitely the weirdest game I ever played. It can be weird, scary and sad at the same time. It’s about a anti-social girl who spends her time dreaming. In her dreams, she needs to explore various huge areas and find 24 “effects”, which change her and give her special abilities. The game can be downright disturbing, and if you’re dealing with depression, you should definitely skip this game. Otherwise, I advise you to try it.

Corpse Party on the PC would be great. Should still be the great game the PSP/V version is.

There is also a third one coming out on the VITA as well.

OK, the next game I’m going to talk about is Eversion.

This is, at first, a happy Super Mario Bros. clone in which you’re a flower trying to save a princess. But something seems odd. The game’s web site alerts the player that the game is not indicated for children or those with a nervous disposition. When you turn on the game, you will see a quote from H.P. Lovecraft. In the game the player has the ability to “everse” at certain places, which means something like traveling between parallel dimensions. And some of those dimensions are… unsettling. In each dimension, the level stays the same, except for a few differences. Like, maybe the grass will turn to barbed wire, or enemies will become paralyzed from fear. I advise you to try it, and there’s no reason not to, because the game is free. There’s also a HD version on Steam, but that version is not free.

It should be a great port.

If you want something that (I guess) is similar to Corpse Party you should definitely try Mermaid Swamp.

It’s an RPG Maker game made by Uri, who makes the one of the BEST horror games in that engine. In Mermaid Swamp, you control the character pictured above, who gets lost in the middle of the swamp with her friends. An old man allows them to sleep in their house while he goes to the village and calls for help. When the group becomes alone in the old, creepy house, weird things start to happen. One of her friends, Yuka, becomes mysteriously sick, one of her other friends start acting weird, and there is a legend about a mermaid throwing a curse on the mansion. One of the most unique things about it is that every decision has a consequence, leading to many multiple endings (I got the bad ending). If you’re interested in horror or old legends, you should give this game a try, especially because it’s free.

This is one of those games that are REALLY HARD to explain. You control Alice, whose parent have died in a fire accident, and she became insane. Now she must battle her fears and guilt to regain her sanity back. This game takes the plot and characters of the original Alice in Wonderland and turns them darker and scarier. I really like the setting, but some could find it too weird. Overall, I recommend this game.

P.S. Could someone else recommend some games, because my ‘to play’ list is getting short.

I am playing Gakkou de atta kowai hanashi S (Scary Stories That Happened At School S, PSX), a horror sound novel. At least, it’s mostly horror. The story is about a member of the school newspaper club, who is saddled with writing an article about the Seven Mysteries of the school (ghost stories). He has gathered a group of six students, who are all to tell one story each (the seventh student didn’t show up).

Each story, ranging from a cursed flight of stairs to a ghost-infested toilet, is related to their school, plays out like a mini sound novel, where the choices of the player (the newspaper club member) drastically change the flow of each story: even though the core story remains the same, each scenario has usually about three to four different variants, and even within those routes, there are small changes.

The students also tell different stories depending on the order in which they tell them: a student will talk about a cursed mirror if he’s the first storyteller, but about the ghost of a friend if he’s fourth (though they usually follow a theme. One student for example has a whole repertoire on toilet ghost stories). There’s a lot of replay value because of that, and add the story variations and the hidden scenarios and you have probably around 70, 80 different stories to enjoy.

Even though the students don’t star in their stories (they’re just storytellers), their personalities really shine through their style of storytelling. Gakkou de atta kowai hanashi S is an excellent written game overall and the music is awesome too (the PSX version features a different soundtrack from the original Super Famicom version, but both are good; PSX version medley vs SFC track). Definitely recommended for those who can read Japanese.

Also, you can try this game very similar to Fatal Frame (All time greatest horror)

Knock Knock is frrom the creators of Pathologic, isn’t it? It’s one of the best games I played in quite some time. Yeah, true, the sections where the game tries to copy Amnesia aren’t that good, but it’s not what the game is really about. It about a boy who is trying to find his mom. That’s the overall story, but it’s acctualy a lot deeper than that. This is one of those games which try to recreate real world problems, making this game closer to something like Papo & Yo than Amnesia. I reccomend this game.

I’ve been playing State of Decay, which is a great zombie survival game.

Usually i don’t care much for zombies, but this game plays like a ‘walking dead series’ simulation game.

You have to constantly balance between gathering resources in places filled with zombies, rescuing team mates and advancing the storyline.

One has to play with different survivors all the time, because your characters do have to sleep from time to time,
Since you can’t save manually, death is permanent, which is especially brutal when one of your most levelled up guys die.

To make it even more realistic the game continues while you’re not playing.
If you haven’t played for a week, you may discover that all your food has depleted and morale of the community has plumetted.

[description of an awesome sounding game]

Definitely recommended for those who can read Japanese.

Way to quench my interest…

This is one of those games that are REALLY HARD to explain. You control Alice, whose parent have died in a fire accident, and she became insane. Now she must battle her fears and guilt to regain her sanity back. This game takes the plot and characters of the original Alice in Wonderland and turns them darker and scarier. I really like the setting, but some could find it too weird. Overall, I recommend this game.

P.S. Could someone else recommend some games, because my ‘to play’ list is getting short.

Have you played the sequel? It’s even better than the first game IMO.

I hold Sanitarium, Silent Hill: Shattered Memories and Amnesia: The Dark Descent as the best horror games I’ve ever played.