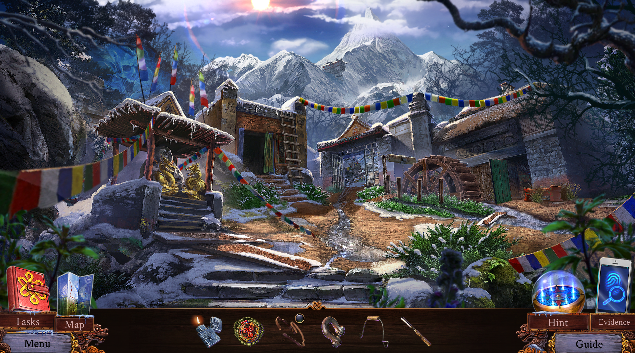 This screenshot is from Enigmatis 3 - The Shadow of Karkhala, the third, and possibly final installment of the Enigmatis game series from Artifex-Mundi. I say that because, unlike what we saw at the end of the first two games, we actually see our arch-nemesis, the Preacher, die at the end of game three. (Or at least I think we do. But I’ve played enough of these games to know
that villains can be resurrected by game developers at will. I believe the villainess in the popular ERS Puppetshow franchise has been resurrected at least four times.)

The main part of the game is set in Tibet. This is where Asmodai, the evil beast slain by the Archangel Raphael, is entombed. This is also where the last remaining acolyte of Asmodai, the Preacher, has come so that he can resurrect Asmodai and receive Asmodai’s soul into his body.

The three main characters, you, Rick and the Preacher are carryovers from the first two games. In this game they are joined by three new characters, B.B., a female archaeologist, a monk and his granddaughter Fang, (pronounced fong.) There are two other characters: another monk who died shortly before our arrival, but whose backstory is essential to understanding what is going on. And an entity similar to the raven in game two.

There are some hidden object scenes, but they are quite diverse and make excellent use of the HO engine developed by Artifex. The puzzles are fair, although I did require a walkthrough on two occasions. In one of those instances, the walkthrough was required because the puzzle’s instructions didn’t quite match up with what you had to do. I would say that the puzzles are challenging, but not impossible.

Music, graphics and voice acting are excellent and match the quality of the first two games.

I did buy the CE version of the game. Mostly because I regretted not buying the CE version of the first two games. I will say that the SE version comes to a very satisfactory conclusion on its own, The main character in the bonus game is B.B., and is a prequel to the main game. Essentially it shows what is going on in the 24 hours immediately preceding your arrival in Tibet. While not revealing anything new, it does fully explain an event that occurs close to the end of the main game. So it is a worthwhile purchase.

Enigmatis 3 - The Shadow of Karkhala is a very enjoyable game, and makes an excellent addition to the series…even if it is the last addition. That said, it is not my favorite. That would be Mists of Ravenswood. There is the charting of evidence as there was in the first two games, but this time it’s done on a smartphone, which just seemed a little gimmicky to me. I missed the bulletin board.

I love the screenshot Tim, liked the 1st 2 games & as I haven’t played a CG for a while used up a couple of credits at BFG (after playing the demo) to buy the CE (on your recommendation!

Some of the graphics so far (+ cut scenes) are wonderful, the HO scenes I’ve played are interesting enough & there seems to be an introduction to more interactive ‘motion’ control such as trying to keep steady walking along a slippery bridge clicking on left & right arrows (on-screen) which was fun to try knowing you could skip if you wanted!

I don’t want to post too much about the game because I plan on nominating it, (among others,) for the next CCPT. But when you’ve finished it, I wonder whether you had a few “Aha Moments.” I know I did, as in “so that’s why Fang acted as she did in that scene.”

I’ve finished the game Tim along with the bonus section. Yes, Fang is an interesting character but I will say no more if you’re thinking of nominating it for a play through which I will endeavour to try & join in with if it’s voted for!

Sent you a PM.