A long time ago, a poster named Wreck started posting every day a memorable scene from an adventure game. Some days, it would spark interesting conversations. Some days, crazy banter. Some days, nothing. It was the Adventure Game Scene of the Day. At one point, that poster gave up, a few of us tried to keep the tradition alive, it lost steam after while, and eventually got included into the main the site as the Adventure Game Scene of the Week. With the recent update, this feature disappeared.

I propose that we bring it back to life, where it belongs — on the forums — and with the frequency it deserves — daily! With a few committed (and well-organised) people, I’m sure we can make it work, at least for a while.

And for the first AGSD of the new era, I present to you: 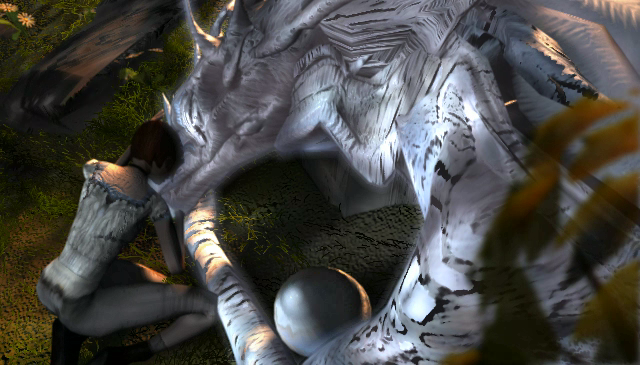 How better to restart the AGSD than with the quintessential adventure game? And the perfect theme for today: Death and rebirth. The sad death of the majestic old beast, but also the birth of a new, lighter, younger incarnation — and one that can turn at will into a hot blonde. (Can your site do that, Marek? Hah!)

What are opinions? Did you get choked up? What’s your take on April’s relation to the White Dragon (I’m not sure I ever completely understood that).

What happened to the Daughter in Dreamfall? Are you worried? Are you excited that Ragnar Tornquist will soon be done with The Secret World and may have time to work on Dreamfall: Chapters, or did you stop caring long ago?

And what do you think about this new incarnation of the Adventure Game Scene of the Day? Do you want it to go on? Speak up!

It’s The Secret World (not that you’re the first or the last to mix that up, seems to be horribly hard title to remember

) and I hope he will be done with it to move on to Dreamfall Chapters. MMOs tend to develop though and he might be staying on the team full time still.

Anyway, I have intentionally put some space between me and TLJ universe so I can replay the two games shortly before Dreamfall Chapters actually come out. I believed that April and White Dragon were related - as in blood. But I’m not going to speculate that more now

Hard time remembering here. My knowledge of the relationships between all these dragons got muddled in time.

In the first scene there was some sort of symbiosis between April and the dragon. A strange feeling of homecoming. I always appreciated the intro scene, very memorable.

I can say that I’d still love a continuation of the series but alas, was one of those that was disappointed in Dreamfall.

Please continue with this thread. It brings back fond memories!

Amazing game. Has it been more than 10 years already?? I need to replay it again. I’ve forgotten most of the story. Hope Ragnar gets done with his MMO soon and gets back to finishing this series.

Oddly enough, my favourite screen in the game was VAVA right at the beginning. I dont know why but I found it calming. Every time I got stuck I’d reload the save and get into the painting room and leave it there for half an hour.

For me Dreamfall Chapters being released (which I’m not sure will ever happen) would be the single greatest event in AG history since the release of Dreamfall. For me Dreamfall is the greatest game ever. Sure there were some gameplay hickups (giant unbeatable unescapable trolls in underground labyrinth) but the story was so great and so immersing and the characters were so well developed it hardly mattered to me. For me Dreamfall stands head and shoulders above TLJ (which is still a really great game btw) mainly for it’s far more mature, far more nuanced approach of it’s story and character. So yes if the sequal to Dreamfall is only half as good as it’s predecessor it’ll be one of the greatest games ever in my book. That is of course if it’ll ever be made which I severely doubt.

Sorry but I’m not familiar w/the scene and a bit of the information confused me.

Is the scene from The Whispered World?

Is The Secret World a future game?

The scene is from the game ‘the Longest Journey’ the prequel to ‘Dreamfall’.

The Secret World is an upcoming MMO developed by the same studio; Funcom, which should be released sometime late this year(?).

The name of the company is actually Daedalic.

The name of the company is actually Daedalic.

What happened to the Daughter in Dreamfall? Are you worried? Are you excited that Ragnar Tornquist will soon be done with The Secret World and may have time to work on Dreamfall: Chapters, or did you stop caring long ago?

Strange bump from the spam but it’s interesting to look back to hopeful times and see now how things turned out.