AG Community Playthrough #63 – There Is No Game: Wrong Dimension 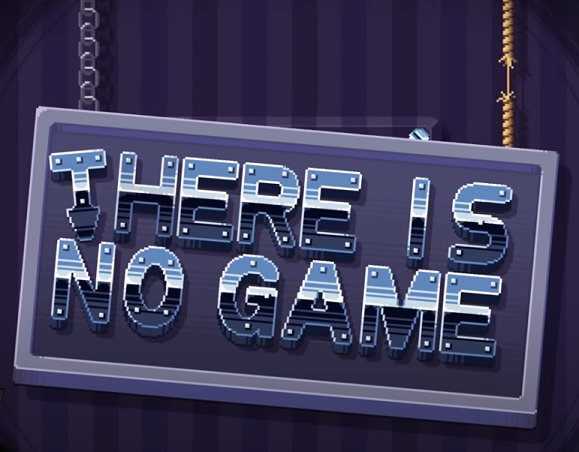 Welcome to the community playthrough of There Is No Game: Wrong Dimension. It was released 3 months ago and already got enough CP votes, thanks to the glowing reviews!

I’ll leave the introduction of this non-game to the developer’s Draw Me A Pixel site:

- A Point-and-Click comedy adventure. You can go ahead and put your controller back up on the shelf.
- Incredible 3D graphics that are flat. Completely flat. And very pixelated.
- Almost fully voiced. (May contain traces of foreign accents here and there.)
- Solve riddles that require you to think “outside the box”.
- Hint system included because you can’t think “outside the box”…
- Shorter than an MMORPG, which leaves you plenty of time to finish some REAL good games.
- Discover the Top Ten best walls. The fourth one will surprise you.
- Motion sickness free, which is pretty remarkable for a non-VR experience.
- Contains tons of bugs… but it’s supposed to be like that.
- And lots of other surprises!

It’s a short game, divided into chapters. IMO we should not take too much time. It’s a very dynamic, humorous game and you don’t want to lose momentum while playing. We’ll start as soon as everybody has bought and installed the game.**

I’m looking forward to revisiting all the right and wrong dimensions of this non-game and finding the achievements I’m still missing.

**But of course you, the participants, decide the pace.

In Western art history, mise en abyme (French pronunciation: ​[miz ɑ̃n‿abim]; also mise en abîme) is a formal technique of placing a copy of an image within itself, often in a way that suggests an infinitely recurring sequence. In film theory and literary theory, it refers to the technique of inserting a story within a story. The term is derived from heraldry and literally means “placed into abyss”. It was first appropriated for modern criticism by the French author André Gide.

Anyway, I’ve replayed the 2015 Jam Edition, and I’ve installed the game. I’m ready to play. Or not play, since there is no game.

The only image of this ilk that I’m familiar with is the photographic image taken of a mirror, reflecting a mirror that seems to recede into an infinitely small image.

I hope to download the game in the next day or two and join. Busy consoling a neighbor who lost her pup last night. I’ve lost a pup seven times. For many different reasons. It never gets easier. Give me a few days to get the game and catch up.

Glad you’ll be joining us, rtrooney. We’re waiting for the other participants to clock in, so no problem if you start a few days later.

Installed and played through the first two chapters. Took me around 3 hours I think, but then I had also played the original free game beforehand and it’s kinda integrated into the first chapter, with several puzzles following same patterns. It does involve plenty of outside of the box thinking, but I didn’t find it all that hard. I was stuck maybe only on a couple of puzzles (the three steps for successful disenchantment in particular, and only because I missed a screw, which was a pretty straightforward puzzle). In fact I think I could’ve been stuck on some puzzles for longer if the game didn’t try to hint me to the right solution, which, and I agree with the reviewer, gets a bit annoying.

The game-no-game concept itself is sure something, you can feel how much fun the French developer had making and voicing it. I thought the funniest - and at the same time most frustrating - bit was that one with multiple foreign versions of the No Game - I loved the stereotypical narrators, but found the “catch the glitch” part rather overlong and uninspired. I also enjoyed searching through the squirrel dashboard and guiding Sherlock Holmes and Dr. Watson in a 2nd-person adventure parody.

In fact by the end of the chapter I started getting worried that it might become the case of “too much of good stuff turning into bad stuff”. Don’t get me wrong, I admire the creativity and the humour behind it, but when the whole game is so meta, one have to wonder. And while I smiled a lot, I wouldn’t say the jokes made me laugh out loud. It’s more of “oooh, that’s smart!” sort of reaction. And I think the reason for it is that it’s not exactly something we haven’t seen before.

I would’ve even go as far as to call it “a meta retro fourth wall breaker”. We had the narrator having his own personality in Sierra games, while the whole interactive dashboard part immediately reminded me of a similar chapter from Space Quest 6. The Monkey Island games also made fun of the interface, Woodruff broke the title screen and Prince Alexander had to travel to the death screen. There were many of such moments in classic games if you think about it.

The difference is that There Is No Game collected as many of them as possible and made a game withing a game. Which is also not something new - this year’s Lair of the Clockwork God also explored that territory as well as various genres, and so far I found it wittier to be honest. The game also feels similar to last year’s Hypnospace Outlaw in that we are breaking the system from the inside out, but, again, that game was not meta, but rather a thing of its own. There is very little of actual story so far, which is, again, not a bad thing - it’s just hard to look at it as something more than a simple joke. Or not, and I’m in a wrong dimension?

EDIT: Em, I also missed the moment when our objective changed from “playing” to “waiting”. But I waited till the last day and tried to put everything inside spoilers.

I missed that the objective had changed, so I continued playing until reaching the third chapter. Very innovative gameplay so far!

Without you offering to do so, we probably wouldn’t have this playthrough.

I had my fun and can wait another week until everyone’s finished with the chapters.

Actually, I don’t think Droste is a known brand in Belgium. I mainly know about the name “Droste effect” because of TV Tropes…

I have purchased and installed and have started playing.

Only a little way in so far, but already I am impressed by how well done this is. The basic idea is so simple and it would be so easy to do it badly, or even reasonably well, but so far it is ingenious and an absolute delight! Here’s hoping the level can be kept up through the game.

Three people have already started the game, rtrooney will join us soon, so no point in waiting any longer for Sefir. Let’s play!