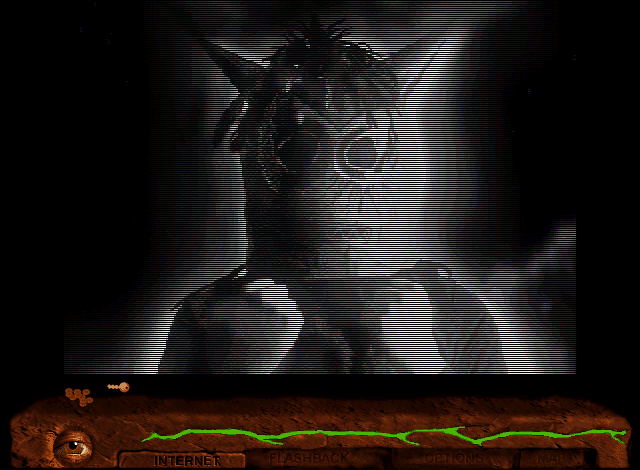 This is the villain from Shivers 2: Harvest of Souls. I’m not sure why I’ve never played it, since I generally liked the first one. Then again, the entire Interwebs doesn’t seem to have a single screenshot from this game that doesn’t look offensively ugly, so maybe I haven’t missed much.

Thank you for posting this!

I was an early Shivers fan. I’m pretty sure I played Shivers before GK2, Phantasmagoria, and a couple other flagship Sierra titles during 1995-1996.

I think the Shivers series is quite underrated. Great puzzles and great atmosphere. And fantastic music by Guy Whitmore.

Shivers II is a great sequel. Takes a proven formula, adds more to it, and stands as a solid game in its own right. The freelook interaction with the environment is really fun. I love the diverse puzzles in the series. Shivers 1 doesn’t really have “inventory” puzzles, other than the vessels to capture Ixupi (which you carry one at a time), but Shivers 2 has a multiple item inventory. The quick travel map saves time as well.

Another great thing about the Shivers games is that they are pretty much nonlinear. Aside from a few ending puzzles, each game is probably 90% open. You can do things in your own order for the most part, but there are instances of needing to solve one puzzle to solve another in a different location.

These games aren’t on GOG.com so people probably have to look to ebay or third party amazon sellers. Very highly recommended.