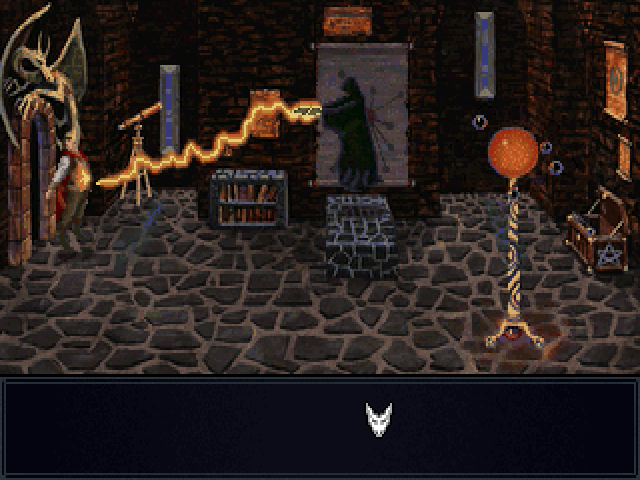 This is Dragonsphere, one of the three adventures made by Microprose, in which you, as the king of your land, go on a quest to defeat the evil sorcerer Sanwe (and, as you can see, things are not going as well as you’d planned). It’s an extremely underrated game (it doesn’t even have a review on AGs), with some pretty clever puzzles and a great plot that twists and turns quite a bit. And it’s !FREE! on Gog, so you really have no reason not to play it.

I’ve always meant to play this since it’s free on GOG.com, but never put in the time because the lack of reviews or general word of mouth.

Maybe I’ll give Dragonsphere a spin later this year.

I can’t even tell you how many years it has been since I played this game, and yet surprisingly I recognized it as soon as I saw your screenshot.

What are the other 2 games made by this developer?

I’ve always meant to play this since it’s free on GOG.com, but never put in the time because the lack of reviews or general word of mouth.

Well, for what it’s worth, it has my personal recommendation. I didn’t play it at the time of its release and only discovered it a few years ago. I expected a cheap King’s Quest knock-off (like Kyrandia 1), but was pleasantly surprised. The world is really intriguing, the puzzles are often clever and the story has a few genuine surprises in store. It’s not the ultimate classic, it’s not going to change your life, but it’s defintely well worth playing.

What are the other 2 games made by this developer?

Return of the Phantom and Rex Nebular. Haven’t played the former, liked the latter.

I “bought” this on GOG when it was free, but havn’t got round to play it yet.

I really like the graphics. I might give this a try based on that and your recommendation :-)

I’m going to be adventurous here and say that Dragonsphere is better than any of the King’s Quest games. Yes, even KQVI.

The plot twist in the game totally took me by surprise and is probably the best twist in any adventure ever.

“Return of the Phantom” was the best of the three, IMHO. Short, but sweet. And so atmospheric.

Dragonsphere was good. Rex Nebular got rather dull after awhile. I like the idea of Leisure Suit Larry-style humor in space, but the humor fell far short of displaying Al Lowe’s wit, and sometimes the game didn’t even make sense.

I really like how the interface background seems to change color with different scenes based on some screenshots. Nice little touch.

Whatever happened to “name that adventure game scene game” thing that we used to play around these parts? It was wicked fun (and wicked annoying, since I rarely knew the answers).

Whatever happened to “name that adventure game scene game” thing that we used to play around these parts?

It’s still here, but no-one except you showed any interest in it recently.

She used to keep these guess/place threads alive & kicking, but now she must’ve gone to Europe or something.