Hey Timovieman. Where did you disappear? We thought you got lost in one of the Belgium dance parties during the last world cup.

Hey Timovieman. Where did you disappear? We thought you got lost in one of the Belgium dance parties during the last world cup.

exactly! where were you Timo when Hazard and De Brunye when ruling the world

Hey Timovieman. Where did you disappear?

Personal issues, nothing to worry about. A lingering bore-out from my previous jobs was involved.

We thought you got lost in one of the Belgium dance parties during the last world cup.

exactly! where were you Timo when Hazard and De Brunye when ruling the world

We’re as proud as we are disappointed. We were the better team in the match against France, but they were smarter. If ever we had a chance to win the cup, it was now.

But I’ll say the same as I did about the Dutch team in 1998: I’d rather be the best and most attractive playing team in the World Cup and go out in the semis, than winning the thing while playing boring and ugly anti-football.


Not saying that the French didn’t deserve the title - they played smart and efficient football, and their style is a legitimate strategy (and a working one as well - Atletico Madrid won the Uefa Cup in the same manner). It’s just not something I enjoy watching. Especially since they have more than enough talent to play attractive football instead.

Apart from the France Match, Belgium introduced the best two best matches at the whole tournament; the one against Japan and the one against Brazil, magnificent football! and the common player at them is Belgium! i enjoyed watching them the most

Apart from the France Match, Belgium introduced the best two best matches at the whole tournament; the one against Japan and the one against Brazil, magnificent football! and the common player at them is Belgium! i enjoyed watching them the most

Boy, did we come away from the Japan match with respect for the opponent. Their positioning was perfect on the pitch and they gave us a torrid time with their efficiency. It took luck for us to get back into that match (Vertonghen’s goal was a failed assist), and two brilliant substitutes by Martinez.
Our last minute winning goal is one of the best collective goals of the tournament, but frankly, Japan didn’t deserve to go out like that, with a last minute goal and no chance to get back into it. This for a team that didn’t park the bus when 2-0 up.
And then their supporters cleaned up after themselves in the stadium and even the players left the dressing room spotless, with a “thank you” note for the Russian staff.
Class team, class supporters, a true credit for the sport.
If anything, I wanted to go fraternise with Japanese supporters instead of celebrating our win.

The Brazil match could have gone either way. We had a bit more luck than Brazil, which got us 2-0 up, but given the way the match played out, Brazil was probably the better team overall. A 55-45 type of deal. We had half an hour where we were better, they had 45 minutes where they were better.
Also the only match in the tournament where Neymar didn’t make a fool out of himself.

Man, the last half hour of that match was probably among the tensest moments of my life. The fear that they’d equalize, the exaltation at a couple of brilliant Courtois saves. Truly an epic match.


Btw, these past six months have taught me something about myself:
I haven’t been officially tested (and I’m not going to because I don’t see the point), but it’s highly likely that I’m autistic.

Take from that what you will. But if you just shouted “I KNEW IT!”, do let me know.

I knew it!
I think all adventure gamers are a little bit autistic

I think all adventure gamers are a little bit autistic

I’ll have you know that anyone who actually knows me will tell you that I have absolutely no autistic abilities whatsoever! Don’t let him sing! is heard remarkably frequently

RIP Lazy Town’s Robbie Rotten. He was only 43

I originally wasn’t going to mention this for fear of jinxing it, but I figured I could use a little accountability, so here goes:

I started working out (functionally) last month. The idea was simply to improve my general fitness and improve my core and lower back. Losing any amount of weight was going to be a bonus but not a necessity, even though I’m very much overweight.

Of course, whenever I start something, there’s a chance that I’ll suddenly ramp things up. After two weeks I added two weight lifting sessions with dumbbells per week to my schedule (just for the upper body, mainly arms, shoulders and chest), I decided to cut back on soft drinks and decided to limit my snacking (mainly staying out of the many treats that colleagues provide at work, which happen to get placed on my desk since I’m sitting in the middle of the 40-man team).

Now, after four weeks, I’m starting to notice the effects. My posture’s better, I’m noticeably walking more upright. I’m less knackered from climbing three sets of stairs at work, and I can lift and carry the kids for much longer when they’re tired. And I’ve lost five pounds (just over 2 kgs) since the start.

So today, I’ve decided to give myself an actual goal: losing another 20-25 pounds (around 10 kgs) by the end of the year, and if I manage to continue this “five workouts per week including two with dumbbells”, lose another 25-30 pounds by the end of next year.
That would then still be another 25 pounds more than I weighed when I was 20, but that was a long long LOOOOONG time ago and I don’t really believe I can reach that level of fitness ever again…

But I’m going to give it a shot anyway.

Wish me luck!
And persistence…

Wow, great job Tim, i imagine the first week was the most tiring, but it gets addictive the more go on thru it, especially when you start seeing the obvious results as you mentioned. good luck man! i wish can get back to working out again myself, but i can’t get myself to make my first move yet.

But I can’t, since I’m the guy that has had this t-shirt for years: 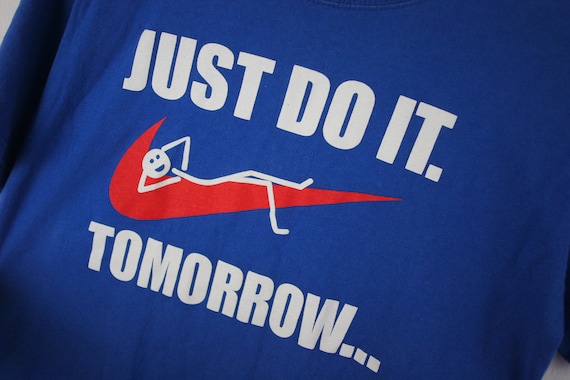 Speaking of funny t-shirts, my wife bought one like this for my son (without my knowledge - but if I’d had seen it first, I would’ve gotten it immediately too). It’s pretty much the coolest thing ever: