To be fair there wasn’t much of music so far, only occasional tunes, so I’m not sure what to make of the soundtrack yet. The game sure has this epic feel though.

Took me a minute to get complete understanding on how to solve puzzles here, like the fact that certain environment objects could be used like they are in your inventory while seemingly only being a hotspot to explore (hello, ball and chain), but once I figured out that it’s not all straight and narrow, I really enjoyed puzzle design…
It’s also funny how sometimes I’d go for the most difficult solution, when it was really easy to begin with (I was sitting there trying to figure out how to move all those hands and pounding everything I could within their vicinity, till I realized I could just pick up the damn beetle leg with a staff, ha!)
It almost feels like the game “knows” what a person who plays lots of adventures going to do and kindly makes fun of it : )

Enjoyed the introduction of magic system. Like I stated in the beginning - it’s been awhile since I played epic fantasy game, so this one seems to give me everything I was looking for in one.

Looking forward to more of Memoria. Kinda almost didn’t want to get back to Geron and wanted to stick with Sadja for longer

To be fair there wasn’t much of music so far, only occasional tunes, so I’m not sure what to make of the soundtrack yet. The game sure has this epic feel though.

Seconded. I do find the voice-over strangely captivating though. I can hear the not quite “top-of-the-line professional” way it sounds and certain lines feel off, but somehow it works in this game. Maybe because graphic part also has this feel to it, so in tandem it comes together well.

Played the game earlier, got until halfway I think… looking forward to join the playthrough!

p.s. Great work on the opening post, Advie! I enjoyed the first game, but forgot the story, so your little recapitulation helps!

lUCKY YOU!  you spend more time than us enjoy the game.

I know why someone won’t get attached to MEMORIA Score instantly or easily, which reminds me of a similar situation to Gemini Rue (God forbid the comparison, LOL) the use of the soundtracks and their timing appearing are only to add the intensity while limited to a handful of key moments!.
on the other hand like at E&H (another masterpiece, god forbids too) where the OSTs are all over the place(s)  every room, character or anything; has it own always flashing THEME.

i might* be making a completion of memoria’s soundtrack at the end of the CPT.

Took me a minute to get complete understanding on how to solve puzzles here, like the fact that certain environment objects could be used like they are in your inventory while seemingly only being a hotspot to explore [spoiler] (hello, ball and chain)[/spoiler]

I like this kinda fun design when the game won’t let you get anything into your inventory unless it is sure you know that you need them and why;  if to try to have the chain a ball before opening the small down spot at the door’s bottom you won’t be able... reminds of BM1.

instead of having tons of inventory item, just in case is being reckless by time and devs need to be a bit smart and respect that the genre fans are even smarter.

Played the game earlier, got until halfway I think… looking forward to join the playthrough!

p.s. Great work on the opening post, Advie! I enjoyed the first game, but forgot the story, so your little recapitulation helps!

I PMed at FB to start playing, did you progress anywhere yet ma man?

Installing right now, I will catch up quickly! 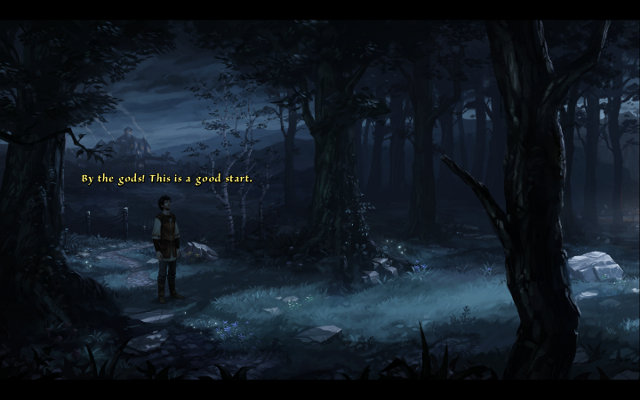 i hope you guys wouldn’t mind as i need to make the post of the next chapter, now, which doesn’t change a thing for the time i already said it would be staring, it is all just i am afraid i might be without internet tomorrow or so, only a couple of days, so I’d play safe and make it now.
————————————-

Chapter III: It Was Here the Whole Time!

When getting control of Geron, you play chapterIII until you get control of Sadja, again

i know what are you thinking of, i can assure you, it won’t keep going on this way; both handing chapters over to each other all the time, No.

Chapter III it a bit shorter than the 2nd, but i will give i’d it the same 5 days, maybe someone or two would use the time to catch on anything they might have missed from chapterII.

what is your best moment or puzzle or quote of chapterII?

keep us posted of whenever you are done with chapterIII, guys!

I was too optimistic about how much time I would be able to spend on playing and have not finished Chains of Satinav yet. I hope to be able to do both that and catch up with the CPT during this weekend though.

I have noticed have your hands tied to many games at the same time, but you still have the choice to jump in, with the intro i gave about CoS you won’t be missing anything that concerns Memoria, but however see what you can do, and i am sorry if i didn’t call out your name but as I said i thought you were out, anyways.

I’m still working on getting out of the tomb room.  I think I know what I have to do but had to stop last night before I could try it.

I like Sadja.  She’s a smart and determined woman, and I like the bantering relationship she has with the demon staff.

Well, it took me quite a while, but I finally figured out the correct sequence to pull the tomb door down.  It was a clever puzzle, and I liked the use of magic interspersed with regular inventory use.  Of course I’m now very curious about what happened to Sadja.  I’ll continue with the next chapter tomorrow.

I’m now very curious about what happened to Sadja.

Believe me when I tell that what happened and will, just gonna blow your mind LK,

I wouldn’t necessarily say this part is shorter than the previous one… Got a bit swamped with work, but still working on it. Will finish tomorrow.

I can now understand what you mean about the soundtrack. There’s more of it and it’s a movie quality. Good stuff!

Not sure what will be the favorite puzzle as I’m not fully finished, but I can tell that the most frustrating moment so far was to realize that your distance/position matters in solving “you know the one I’m talking about”. That was a moment of trying everything on everything till I actually had to look up a hint (which I very rarely do). Still can’t say if I’m more impressed or annoyed with that one, haha.

Will post more in a few. The story is definitely interesting!