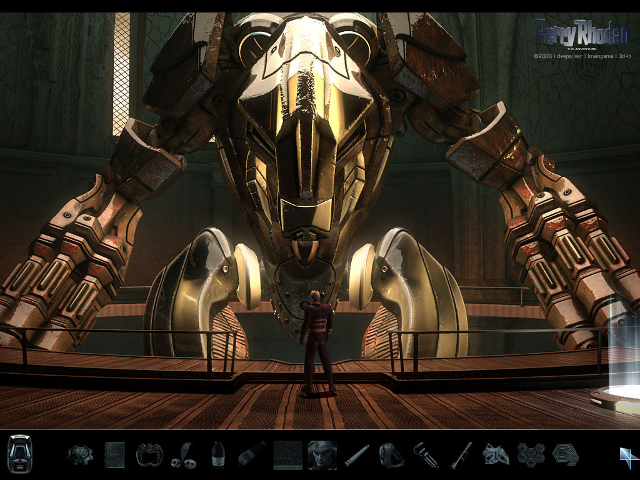 I originally played Perry Rhodan shortly after its release, and I remember being impressed by it. I’m now replaying it for the first time (I’ve just finished the section with that awesome giant robot), and I still think it’s really great.

I don’t understand why it seems to have flown under everyone’s radar. I mean, the vastly inferior Secret Files games are constantly mentioned on the forums, but Perry Rhodan never is. I guess it’s partly due to questions of availability (the game is not sold on Steam — but it is on the Adventure Shop, go and buy it folks!

), but really I don’t understand why it didn’t get the love it clearly deserves.

On an unrelated note, it’s been a week since I’ve decided to try to revive the Adventure Game Scene of the Day. What do you say? Was it a good idea? Was it a mistake? Should we just stop? Should it switch to a weekly basis? Does anyone actually care?

An intelligent and deep sci-fi game.

We need a sequel (after all there are about 2500 novels to pick from).

i have great soft spot for this game, i can write an article just for praising it and i am sure i would not give it what it deserves
....
an amazing game and it so sad that those developers haven’t made a sequel for it or any other adventures as far as i know

Totally agree, a very underrated, epic sci-fi game and one of the better looking ags. It was even nominated for a prestigious German award, along with Crysis

I also really enjoyed the humour that reminded me of Space Quest at times. Way better than those cheesy Secret Files series.

Yes, there seems to be a distinct lack of awareness of this game. I mean, I have owned it for years— picked it up with half a dozen other games for cheap —  and yet all I really could tell you about it is that it’s based on an absurdly long-running German space opera. The giant robot (”awesome giant robot” is a pleonasm, surely?) seems like a good reason to install it soon…

About the general question: I care. I think it’s a tradition worth keeping, but I believe you sent somewhat mixed singals in the Monday’s “Scene of the Day” thread. I agree with all your points: separate threads, somewhat fixed time of the day, and most of all the need for some kind of coordination, but you failed to specify what would the coordination look like. Let’s say I think I could help by contributing a screenshot weekly. What is my next step?

I’ve played it and I liked it but I can’t for the love of god remember any giant robot! I guess I should play this one again (yet another one).

And I know what a pleonasm is, thankyouverymuch.

I agree with all your points: separate threads, somewhat fixed time of the day, and most of all the need for some kind of coordination, but you failed to specify what would the coordination look like. Let’s say I think I could help by contributing a screenshot weekly. What is my next step?

I don’t know. Shoot me a PM, I guess? (Do you think I ever plan anything?

I’ve played it and I liked it but I can’t for the love of god remember any giant robot!

I know! I had forgotten about it too (and, generally, the whole part in the museum), and it’s only when I reached it that I started thinking “Oh yeah, there was a robot!...” Mostly, I remembered the beginning, and that planet with the incredible underground city and the mines below it. But it’s all a bit sketchy and it feels like I’m playing large sections of it for the first time — which is great.

I just finished playing this for the first time and I really liked it. It is a pity there was no sequel. I must admit I’m not 100% sure what happened in some of it…

The real problem with reality is the lack of background music.

Knightette of the Order of the Caption

Yikes!  That giant robot skeert me(!) and I don’t scare easily.  I’ll have to get ahold of this game.

“Pleonasm” is a great word.