“Gamer Mom” - an adventure about a dysfunctional family

Hey. I haven’t been here in years, but I need to share my new adventure game with you guys. All the things I used to argue bitterly with you guys about what adventures are capable of, I’ve put into this game as a proof of concept. It’s coded in HTML5, so you can play it in any modern browser (i.e. not IE, except for version 9.), including a lot of smartphones. I really want to know what you guys think. 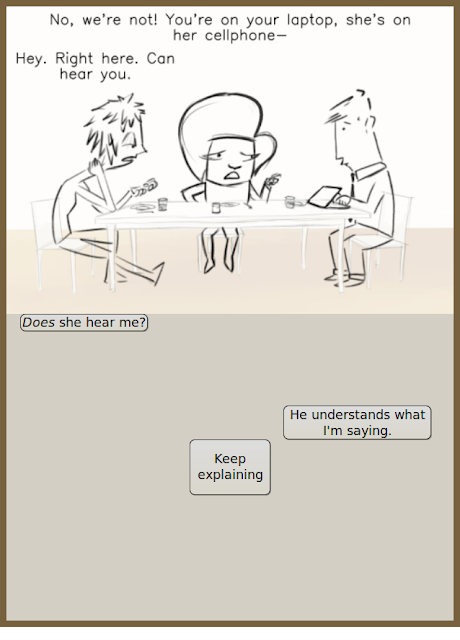 Interesting approach. I really liked all the dialogue options and trying to work within the family dynamics but I didn’t get anywhere and the husband just left and it was kind of a bummer at the end.

I remember your earlier posts about this, but I’m still not sure about the concept. It doesn’t feel like much more than a variation on my least favourite adventure game puzzle: the dialogue maze. It was fun to try out the different combinations for a while, but it gets old quickly. Also, it’s frustrating to get loads and loads of depressing endings but never be rewarded (if there hadn’t been a message assuring me that there was a way to get them to play, I would never have spent as much time with it as I did). Though I guess the “everyday blues” theme might just not be what I’m looking for in games, and I shouldn’t let that affect my impression of your concept.

But in the end all I see is a huge dialogue puzzle. Reluctantly, I’m reminded of my favourite adventure game series; the Tex Murphy games, whose dialogue trees could be terribly difficult to get through. In both cases there is too little indication of which conversation path the game designer wants you to take, so you end up either guessing or brute-forcing your way through. And with “Gamer Mom” the combinations are too many for these approaches to work. (I realise that was probably the intention.) I can imagine that it’s lots of fun to script a huge dialogue structure like this, but I’m having difficulty seeing where the entertainment value for me as a player comes in.

I never said it was supposed to be entertaining, per se. True to life, is more what I was going for. I was modeling the game after the feelings I have trying to relate to my own family. Not much entertainment there, which isn’t to say you couldn’t make entertainment with these techniques, but just that that’s not the goal here. And for the record: I don’t expect many people to win the game. I expect people to live inside this strange character’s head for a few minutes and understand what it’s like to be her. That’s the experience I’m looking to create, and while getting the player to try to win (which is possible, I wasn’t lying) helps the player relate to her obsession, the goal is not the point of the experience. There is not a single ending in the game which I don’t stand by as a perfectly valid way to play. Really, the point is how you feel about the situation from moment to moment.

I kept thinking while playing that this might be useful as a psychotherapy tool but as a game it was not much fun.  I spend too much time working with similar people in real life.  I like games to take me away from all that.

This is an interesting game. I do like it (though I hate the mother. She is so childish).

I am still looking for the good ending. There really needs to be a ‘save’ option. I find myself reaching an option leading to several paths and being annoyed that I will have to find it again later.

An adventure game without any adventure… why?

I loved it! I loved the approach (the internal monologue of the mother was great) and the setting resonated with me (I play a similar role in my family). Some of the mechanics were quite clever too - for example, one of the buttons (“Wait for the right moment” I think) diminishes in size the more you press it, symbolizing the diminishing patience of the character. I will give it another whirl or two to try to get the good ending (if there is indeed one).

I liked how the options and the text were presented, but I didn’t always know what the options were about (like when she asked her family to play World of Warcraft with her I was surprised, though in hindsight it seems obvious). Was this intentional?
I’m not sure I want to go through the dialog tree multiple times though, it may take away from the organic, natural way this experience unfolds and the mechanics may became too obvious, but I enjoyed going through this one time.
Also it’s interesting how the dialog partners react or don’t react. Most of the time the family didn’t say anything or just looked skeptical at you. I also appreciated that you talked to more than one person at a time and that this actually worked really well.

So I think this is a nice proof of concept.

Edit: Man, the source code itself seems to be a good read! This is quite something…

This game is frustrating. It, and the characters are making me mad! IS it possible to win this? At first, I wasn’t sure what was happening - if I was meant to be getting audio through my speakers and they weren’t working as it seemed the game started mid-conversation. I get it now, though. It is interesting, and I like what you are trying to do… but so far, ultimately frustrating and unrewarding. But I do like it.

It is interesting, and I like what you are trying to do… but so far, ultimately frustrating and unrewarding.

My mother played the game -and understand, my family’s lack of interest in anything that remotely interests me is where this game is coming from- and she got really obsessed with finding the win condition. I just moved out of my parents’ house a few weeks ago (Thank God.), and she was feeling lonely around the house. She thought it would be a nice gesture to send me a text message saying that she had beaten my game. So she tried playing, and failed, and tried again, and failed, and starting writing down every path she took so that she could try something else later. Hours later, she was no closer to finding the ending (The brute force method is not particularly effective - the game has hundreds of different states.), and she gave up. I came home one weekend, expecting to sit around at the sort of long meal where no one has anything to talk about that interests me at all, and my mother told me she’d been playing. And when she showed me the pages she’d written out, I felt like it was one of the sweetest things I’d ever gotten from her. Finally, she was having an experience that I could relate to as a gamer in my family. But even though my mother recognized that getting people to feel what I’d felt was exactly the point of the game, even though I was smiling from ear to ear at her story, she still felt like she’d failed to connect with me like she’d planned to.

The point of this little anecdote (It got away from me a bit, I know.) is that I’ve been seeing a lot of people having precisely the sort of experience that I designed this game to evoke, but because they’re inside that experience they feel like the effect the game’s having on them is accidental. And that makes me want to make more adventures, and see what other sorts of life experiences I can simulate.

I love this. I’m now obsessed with trying to find new paths and trying to get that “good” ending. I also adore the sketches. Lots of emotion in those simple little figures.

I managed to get the father to play but he wasn’t into it. Not sure if that got me any closer to the good ending or not.

I like this a lot. I mean it’s not a pleasant emotion you’re meant to be experiencing as this character, but it’s a very interesting use of interactive dialogue that’s not just the traditional tree with branches. Good job.

I managed to get the father to play but he wasn’t into it. Not sure if that got me any closer to the good ending or not.

That’s the only ending where they actually play. Congratulations for finding it. Of course their problems can’t be solved so easily. Personally I think the “give up” part where she decides to be honest is a happier ending, because while World of Warcraft isn’t going to fix anything, talking candidly about their problems might.