Fallout 4 add ons - Build your own vault or contraptions. Nuka World DLC in a theme park.

Skyrim Special Edition - HD remake with Mod support. Looks Georgous, but do I want another 100 hours into that….Doubtful

Prey - Looks intersting. Nothing like the famous Prey 2 trailer that everyone was exciting about.

Elder Scrolls Online - Dark Brotherhood DLC which some lady in the audience LOVED everything about ESO..

That was a better show. No Evil Within 2, or Wolfenstein, but we did get a new Quake.

Prey was leaked to be tranformed into Systemshock spiritual successor, like Dishonored is to Thief.
That level with past stuff showed at E3 is inspired from award winning Thief3 level,
The Cradle.

Didn’t see the conference, too late. Prey is looking good but doesn’t seem like they announce much stuff. Too bad about Quake.

Thought the first 2 conferences were a pleasant start - I’m still waiting to get hyped though.

Fe looks awesome but the title is a shocker. Nice to see EA branch out artistically.

Dishonored 2 will be a must for me. I love that game and this looks like the same experience. Some of the powers do seem more OP than the first but I felt encouraged to challenge myself to a pacifist run as a result. Very rewarding.

I’ve always wanted to play the first Prey and was disappointed when its bounty hunter sequel was cancelled. Sadly, this looks nothing like a cool bounty hunter cyberpunk adventure but there’s enough there for me to want to know more. And, Cyberpunk 2077 is coming.

Battlefield 1 looks really good but I want to know that the campaign will be worth it. I’ve been turned off by how military shooters dumb down the representation of war and I’m hoping to get a little bit more Apocalypse Now and less Rambo.

By the way, have you seen this trailer for Mafia 3?


It might not be what you expect from a game called Mafia but you’ve got to admire that ambition.

Forza looks so good, first racing game in years that me want to sink in.
Recore looks poor man Metroid but must play.
Gears looks great coop fun too.

So far, the only game that has blown me away is Dishonored 2. It looks incredible.
Prey looks like a huge disappointment compared to the old bounty hunter type gameplay that was cancelled before. MS conference so far is a snooze fest. 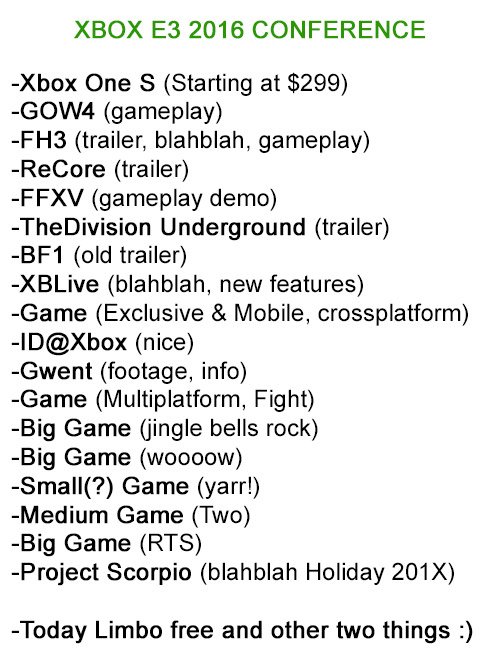 That Ffv demo was so awkwardly hilarious.