American McGee is doing a kickstarter for his new game, a zombie steampunk version of Wizard of Oz.  It’s called OZombie (I know, groan). 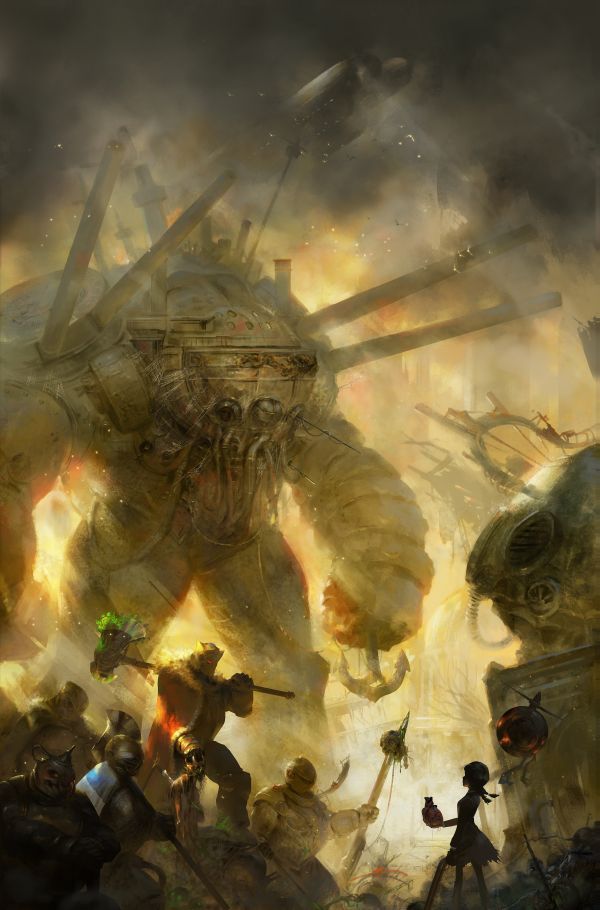 The art design looks really cool.  My main problem is that it’s a little unclear what type of game it’s going to be.  They describe it as a “narrative-driven action-adventure game” and say it will “feature a variety of perspectives and game modes with an emphasis on role-playing, tactical combat, exploration and story telling.”  I don’t know what this means.  If I thought it was going to be anything like Alice: Madness Returns I would pledge in a heartbeat, but it sounds different.

I guess we should just be glad that the Walking Dead DLC wasn’t called 400 Dayz with a z.  Ugh, so tired of zombies.

I’m personally pretty tired with anything with any kind of living dead in it. I’ve never been a huge fan of zombies in general, so the whole graze with them at the moment has been a bit odd to me.

Though I did like Telltales Walking Dead, which was unexpected, as I don’t like the TV series nor do the comics appeal to me.

I do want to support this since I’m sure McGee will give us something more visually interesting than just rotting corpses. The concept art of zombie scarecrow looks unique enough.

Still would have preferred a conventional 3D platformer a la Alice in the Oz universe without the zombie gimmick though. If only E.A. weren’t such dicks…

Whew!  And I was worried it wouldn’t be Dark and Gritty enough.

Ok, if they are going for the Nightmare Before Christmas type I’m okay with it. But could we seriously get rid of these zombies already?

I’m just as tired of zombies as the next person, but since they use zombies in a different way than usual, at least in storytelling terms, I think they’re excused - if the gameplay is more than a simple hack and slash fest, that is

From the main KS page:
“As a kid I was a huge fan of Robert Heinlein’s stories. There are several “Heinlein themes” that I like and want to explore: Individual liberty and self-reliance, the obligation individuals owe to their societies (and vice versa), the influence of organized religion on society - and the tendency of society to repress nonconformist thought. Hence, “zombies” are destroying Oz in a mindless (heh) fashion, without thinking of the future consequences of their actions. The fact that they are “zombies” or that their leader is obsessed with “brains” is less about the traditional “brain eating” concept of zombies and more about mindless conformist behavior.”

And from the most recent KS update:
“Seriously, the definition we’re going for here is #2 - an automaton. Specifically, of the type found throughout our modern society. The person who goes about their daily lives oblivious to the political and financial forces that shape and determine the quality and content of life. “The Matrix” offered beautiful commentary on this concept - of an entire race plugged into a simulation of life, and of a certain number of people who would prefer the illusion to the reality. These are the kinds of zombies we’re talking about.”
http://www.kickstarter.com/projects/spicyhorse/ozombie/posts/521287

Gotta agree, cash grab is now days the first thing that springs in my mind when I see yet another game with zombie theme.

They are now pitching new names and changes since name and concept is confusing people.
Looks like it ain’t gonna make it.

Think they will go ahead with this project without a successful KS campaign?  I’m still indebted to them for the Alice games…...the 1st being an absolutely fantastic game for its day.

Wow , that was fast to pull the plug. I have invested so much in other KS ,didnt have
much to back this, too bad considering i love his style and Alice games.

Maybe it was steep and the promise lacked any gameplay footage or bad timing.
The numbers were crawling.

That’s how I feel as well. Also, McGee doesn’t exactly have a stellar track record when it comes to making games that are not Alice. I see his argument that the money would have gone to keeping Spicy Horse afloat (who did a nice job on Madness), but honestly, his “latest” ideas are just not that appealing. A Diablo-clone, a zombie game, funding of an Alice movie (which could never be any good anyway), the we-have-money-but-not-quite-enough-so-give-us-more-which-is-still-not-enough-attitude: I have absolutely no desire to support any of that.

One died, another born