[...] I am working much more happily now writing as I program on my new game in my own time. Gives me more space to edit and fine tune, test out scenes and make rewrites etc.

Could you tell us something about this new project?

If I understand right, something I loved and would want to have again with unlimited money?

It was more in line of - what you prefer to work on (which part of development process) yourself, even if you had unlimited money and team of professionals that you can outsource the rest of the work to? Basically, what did you love the most about the process of making a game? I only know a few people who are making games, and they usually say something along the lines of “Man, I wish I can hand over the programming part and fully concentrate on the writing,” or “I’m much better at coding, and writing is hard for me. I would’ve love to have money to hire someone who can fine-tune all the writing in game, while I do my thing.”... Stuff like that.

But the last tidbit was still a very nice one - exactly the reason it’s great to have developers as a part of a community playthrough.

sorry i cant seem to start myself Anna’s Quest, lots of events coming up for me here due to some regional ceremonies and holidays, and i ve been off work the last four months or so and its hard to let these gigs slip by, hope you all great time and enjoyment with this great adventure.

Took me a while to get back to the game but I did finish chapter 2 and I’m hoping I’ll have more time to play the next chapters. Having a long pause in the middle did affect my immersion negatively. I’m not over the moon about the game but I recognize it has many merits and will see how things will progress.

I’m another one that didn’t really enjoy Anna’s voice. I don’t think the VA is bad, but the high pitched tone just annoys me a bit. Personal tastes I guess. I will most likely get used to it, but it takes a while, and because of my longer pause, I needed to do this twice already. Hopefully next time it will be a faster adjustment.

I don’t think I’ve aced any “timed events”. I play the game without any hurry, lazily looking around. Because I can. So yeah, I was saved by the amulet.

Ok everyone! Time to move to chapter 3!! 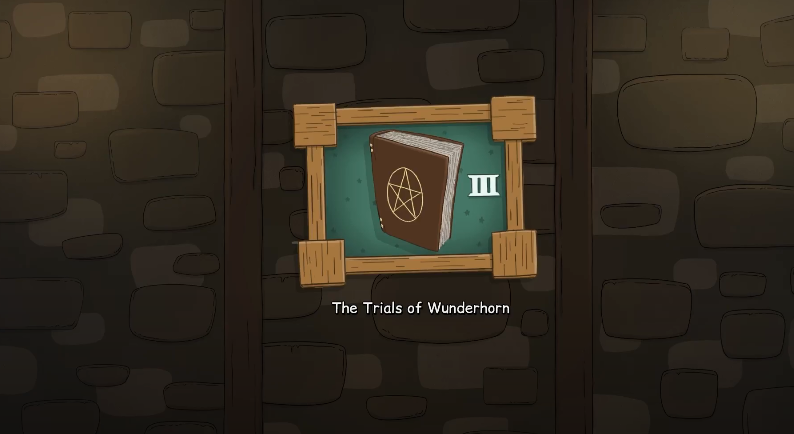 We managed to escape from the evil witch Winfriede and we made a new friend along the way, Ben. We are now in a village, where new tasks await us!!!

As a last note about the previous chapter, I realized that the game gives you a whole new perspective once you have finished it and know more details about the story. There are small hints everywhere within the tower that made little or no sense, or are just vague hints. This trend continues in this chapter as well. Let’s just say that things sometimes are not as random as they look on the first time and many of them are… interconnected within the storyline or with other charaacter’s stories. I wholeheartly recommend replaying the game after you finish it.

Have fun!! You have a week (until the 9th of August) to finish chapter 3.

EDIT: Unlike other people, I always enjoyed Anna’s voice. I find it very cute and gives her the exact tone of innocense I would expect from her. Ben’s on the other side is the big miss imho.

Could you tell us something about this new project?

It’s a murder mystery set in a rural mining town in America. I’m getting closer to sharing it every week, but I want to hold off until everything’s just right

I’ll find something to share here though before we’re done!

It was more in line of - what you prefer to work on (which part of development process) yourself, even if you had unlimited money and team of professionals that you can outsource the rest of the work to?

Ohhhhh right, right. I actually get frustrated very easily with background art, especially now I’m trying to develop a more sombre, mature tone. If I had unlimited money I would love to work closely with someone who’s got the depth of experience in that role. That said, I’m pretty happy with the way my work has developed recently

EDIT: I should add that of course I love drawing, but more so the characters! I adore it, up there with the most loved aspects of it.

As a last note about the previous chapter, I realized that the game gives you a whole new perspective once you have finished it and know more details about the story. There are small hints everywhere within the tower that made little or no sense, or are just vague hints. This trend continues in this chapter as well. Let’s just say that things sometimes are not as random as they look on the first time and many of them are… interconnected within the storyline or with other charaacter’s stories. I wholeheartly recommend replaying the game after you finish it.

Love it!! I think we can discuss this at the end a bit more, but I really wanted the player to have as much intrigue fed to them throughout so that the ending had more impact. Just little questions here and that which hopefully come back to you. I think the feeling when a number of mysterious narrative elements just slide in together is so very satisfying as a player or audience member to something, so I’m glad that comes through for you!

Lots of interesting things happening in and around Wunderhorn. I particularly liked how the blacksmith was described by his daughter.

It is the 8th of the month and we still haven’t heard news from the majority of the players here.
Some of them, might be still locked up in chapter 1 and found no way of escape!....
Some of them might enjoy the drinks of Wunderhorn a bit too much!....

Who knows what dark fate awaited them?

I spent the past week at a family resort with the kids, without the laptop, so I couldn’t continue. This was intentional. I’m playing Chapter 3 this evening, and will hopefully then be allowed to continue Chapter 4 tomorrow.

Bet you thought you’d seen the last of me in this playthrough? Guess again. Game’s too good so far.

Still in Chapter 3, but don’t hold up the CPT for me, I’ll catch up soon enough…
I got sidetracked a little yesterday with the Kiss Me Deadly Quiz.

But I am progressing, and now I know where Sughly got his avatar from.

And I had a good chuckle in the Antique store. I hadn’t been paying too close attention when I was looking at the hotspots, but when I checked out the rabbit doll, I had a sudden “isn’t that Harvey?” revelation - which was confirmed immediately with it being described as “cute but crazy looking”. And then I checked out the clown’s hat from Whispered World, the top hat from Night of the Rabbit, the mannequin that had Rufus’ outfit, etc.
As if on cue, just when I thought “is this the screen with all the Daedalic references?” I got a pop-up for the “Cameodalic” achievement.

It’s also clear that I’ve been playing too many RPGs. Agreeing to help Roostwig with his accomodation, vowing to help the children - both diversions from our main objective - just had me going “yay, side quests!”. In an adventure game...

Quick question for Sughly. I’m loving the artwork in this game, but there’s one small thing that I want to ask about: what was the thought process behind Anna’s eyes?
Other characters have “regular” animated eyes (with an outline, white colouring and a black dot for a pupil) and others still have full black ovals for eyes (also quite common in animation).
What does stand out is that Anna has a black outline, and that’s it. The eyes are even skin-coloured. While I don’t dislike it, I’m not exactly a fan either.

It makes me think back on the Disney movie “The Rescuers” where the eyes weren’t coloured in either:

I mainly ask because The Rescuers was “the final straw” for animator Don Bluth and he left Disney after that (and took several animators with him) to found his own animation studio. He has stated that he was specifically livid that the main character’s eyes weren’t coloured in.
Now I’m not all that knowledgeable in animation theory, but I get Don Bluth’s point. Which is why I wanted to ask about Anna’s eyes here.

Checking the haystack for a second time (after already finding the needle), saw Rufus drop from the sky. “Far Away From Home” (“Wrong game, mister!”) achievement in the bag.

Edit: and the “Ring-a-ding-ding” achievement. Because I kept trying to ring the bell to annoy the antique shop’s keeper. And because I kept getting a new unique response each time.

Well, I’m due to give birth any day now and can’t seem to really sit comfortably in front of a computer more than a moment. So yeah, don’t wait around me either. I’ll continue when I can.

I suspect there aren’t too many places you’re comfortable right now, Millenia.  All my best to you!

I am playing and haven’t made it to chapter 3 yet, but don’t let that slow everyone down.  I tend to be a pokey player, mostly because when I’m stuck I walk away and do something entirely different for a while (fold laundry, take a walk, rearrange furniture, etc).  When I go back to the game, I often get a new insight that helps me move on.

I really like the game so far and have no problem with any of the voice acting.  Having been a therapist for kids with speech and language problems all my working life, Anna and Ben’s voices are just fine.  The colorful graphics are very pleasing, and I’m finding the puzzles require just the right amount of thinking without any major hair-pulling.

Since we still wait for at least another 2 people to finish the 3rd Chapter (Lady K and DCast), it is only fair to give them a couple more days. I will put the start of the 4th Chapter for tomorrow, 11th of August.

Finished the 3rd Chapter. Got two more non-story achievements: “Pain in the Hands” (for grabbing the book with its protection spell still active) and “Kill it! KILL IT!” (for trying to play the “regular” violin to the Weisse Frauen).

I love the “Meanwhile…” bits whenever I get a needed item and advance the story. Reminds me of the Monkey Island games in particular.

LOVE the plot development at the end of the chapter! Although I did see it coming that the sorceress wasn’t to be trusted, I didn’t see THAT particular plot twist coming. I’m really interested in how this continues now, because it seems like there’s a LOT going on at once. The game feels deeply layered, and I’m very much digging it!


Quick note: the angry looking Weisse Frauen remind me a lot of Edna…