It’s a rare occurrence when a video game captures the hand-painted whimsical feel of our favourite animated films, but indie developer Venturous have accomplished just that with a new game that evokes a twinge of nostalgia. Voyage (not to be confused with Kheops Studio’s 2005 puzzler with the same name) is a side-scrolling adventure featuring two protagonists. Playing solo with an AI companion, or cooperatively with a friend, you will traverse beautiful painterly environments whilst attempting to piece together whatever bits of environmental storytelling you come across. The game achieves exactly what it sets out to do and is somewhat reminiscent of the visual style and atmosphere you might find in Studio Ghibli’s more subdued films. It is a thoroughly pleasant experience, as long as you like your journeys quick and easy.

In Voyage, two survivors trapped on an alien planet are trying to find their way home. You don’t get to know much about them or where they came from beyond their humanoid appearances – one seems to be a woman with her purple-ish hair in a ponytail, the other an older man with white hair and beard. The game begins with these two emerging from a crystal-like pod, which is essentially all the context you will get to go on. The story is told purely through visuals without a shred of text, so you’ll need to interpret for yourself what seems to be going on.

In order to escape, the protagonists will travel through lush forests, windy deserts and deep caves, each littered with ruins or pieces of derelict spacecrafts, and each containing threats from the terrain and wildlife. These locales all have their own distinct aesthetic, so you really feel like you are traversing a wide range of biomes and climates that an alien planet might have to offer. You will spend most of the game running and climbing, taking in the beautiful sights and sounds, though the journey is littered with obstacles to overcome along the way. 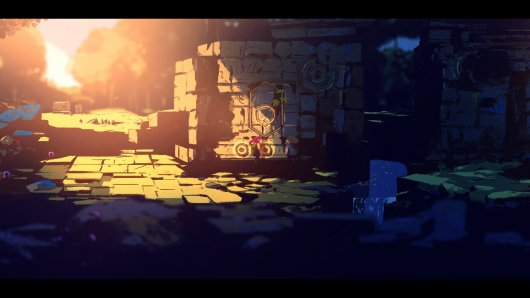 I’m inclined to refer to them as obstacles rather than puzzles because there’s really no challenge involved. Every objective consists simply of searching for hotspots and then interacting with each one – resulting in pushing, pulling, or pressing the object in question – until something happens that allows you to progress. Maybe you’ll have to punch a series of buttons (in no particular order, I might add), clear debris, or topple one of many large objects over to reach higher ground. While these sections provide a bit of subtle world-building, as you are interacting with decrepit remains of the planet’s ancient civilization, they are otherwise mindless and require no thinking. Needless to say, there is hardly any difficulty to be found here. This is fine since Voyage is intended to be more of a cinematic experience, yet the constant hurdles do little more than slow the pace in inconsequential ways; not enough effort was put in to make these “puzzles” feel like anything other than a bit of interactive padding.

The game can be shared with a partner beside you, but you may be wondering, why play co-op if there are no puzzles to solve together? Well, besides commenting to each other on how pretty everything looks, the cryptic storytelling is what makes it worth sharing with a friend, as part of the fun is speculating about what the heck everything means. Not a single word is spoken besides the occasional grunt or yell, and the only text you’ll see is the developer’s logo and the title of the game. Even when it comes to the options menu, everything is represented by images. As you travel across the planet, you will sometimes come across translucent spirit-like creatures, sitting on a log watching you from afar, or maybe you will run alongside large numbers of them as they seem to also be travelling in the same direction as you in some sort of mass exodus or pilgrimage. I figured these were the planet natives, or perhaps just trace memories of them. Whatever the case, the world seems to be telling its own story parallel to that of the two protagonists. Part of the beauty of Voyage is that you are not here to study or understand the planet; the two characters are just trying to get home, so the mystery will always remain.

Voyage is best played with a controller but you can use a keyboard if you prefer (with a second person on the controller). Movement isn’t exactly fun, doing only the bare minimum, in that it allows the pair to run left or right, quite stiffly. There is no jump button; instead you just hit the interact button with certain things to climb them. You’ll have to figure what is climbable from the look of the terrain, but the game generally does a good job of making it obvious. You use that same button to handle objects and initiate cooperative actions like helping your partner up to a high ledge. Objects that need to be pushed or pulled will often need the combined strength of both characters to be moved, so the AI-controlled character will join you automatically if playing alone. 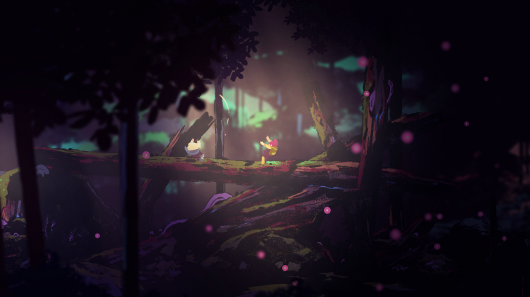 The two characters will even hug each other if you hit the interact button whilst side by side, or if you both hit it in co-op. This can lead to quite a few accidental hugs when actually trying to engage with objects, though such mishaps are usually amusing or heartwarming rather than annoying. Another button will highlight all nearby hotspots for you, a visual cue appearing over them one at a time as a pleasant ping sound also plays for each; the audio is helpful in pointing out hotspots that are off-screen. There is no other indicator of where hotspots are, so this function can be very important. There are also buttons that make your characters point and call out. In single-player, they can be used to give stop or follow orders to your partner, whilst the “pointing” action will make you swap between characters. In co-op they merely serve as gestures and will likely rarely be used.

These motions, along with every other active thing in the game, are all in the style of hand-painted animation. Each movement appears fluid and nails the feel of a lovingly crafted animated movie. The environments are nicely brought to life, both in the background and foreground: the forest is littered with creatures, birds flying by, and flowers moving in the breeze. I was also impressed by how the characters are lit up by shafts of light. This immersive spectacle is further reinforced by comprehensive sound design and excellent music. Each of the aforementioned ambient details has a crisp and realistic sound effect to go with it. The score comprises delightfully whimsical tunes to start off with, reminiscent of The Legend of Zelda games or classic JRPGs. The arrangements, which vary depending on your location, consist of many different types of instruments, from synthetic sounds to orchestras, to piano alone. The tracks usually evoke a soft and relaxing atmosphere, though it depends on what is happening on-screen. There is no voice acting, only some grunts or gasps when climbing. 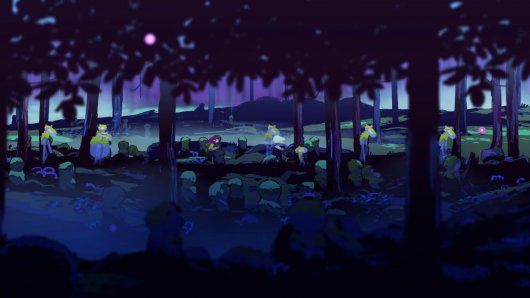 Unfortunately, while the characters have nice animations, there is not much done to characterise them or make you care about them. In fact, they don’t seem to react to anything that happens until the final cutscene. This makes the climax fall flat, as there is a clear attempt to make it emotionally hard-hitting, though I will refrain from further detail in order to avoid spoilers. The pacing is another issue: it’s all well and good that the graphics and music are beautiful, but for some of the slower sections where you might be in a largely pitch-black cave, for example, there isn’t much to look at and there may be backtracking involved. Some is actually required to a small degree, but you will also need to retrace your steps if you missed anything in passing. This can be avoided if you are diligent with the hotspot button, but it became a little grating for an impatient fellow like me. Those lovely foregrounds I mentioned earlier also blocked my view on a couple of occasions. It didn’t cause any major problems but still felt slightly obstructive.

Voyage serves to entertain for slightly longer than your average feature-length film at about two hours, and without more challenging gameplay it would probably start to outstay its welcome if it were any longer. There is no incentive for replaying the game due to its linear nature, which is not to say that you won’t ever want to experience it again for its excellent visuals and music, perhaps with a partner if you played it the first time alone (or vice versa). Even with some minor frustrations, I certainly enjoyed my time with it and appreciated its very evocative presentation, especially in the first half’s more detailed, less backtracky locations. There is little to latch onto here if you require puzzles in your adventure games, but as a cinematic experience, Voyage certainly shines brightly while it lasts.

Though its short play time is almost devoid of challenge and occasionally suffers from pacing issues, Voyage is an enjoyable one- or two-player cinematic side-scrolling experience with an intriguingly cryptic story told through its lovely animated visuals.

What our readers think of Voyage